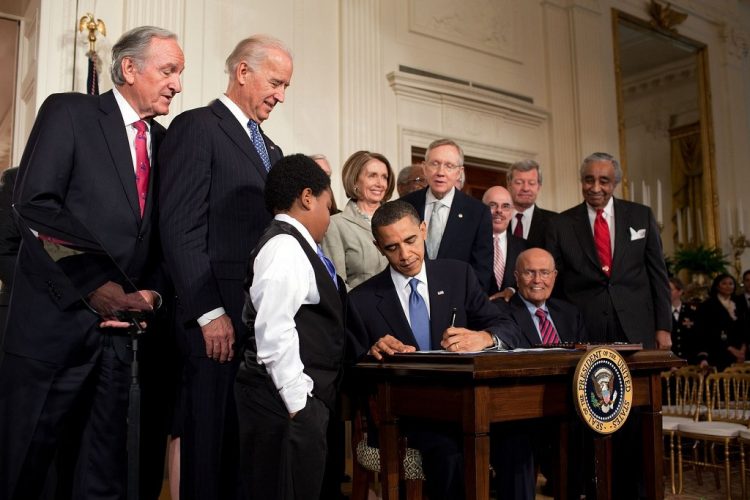 Meanwhile, in non President Trump vs “The Squad” news, current Democratic primary frontrunner Joe Biden was unveiling his healthcare proposal, and the tagline he laid on the folks at an AARP gathering sounds strangely familiar.

Former Vice President Joe Biden on Monday said that under his new health care plan, people who like their insurance coverage won’t be forced to give it up.

Speaking at the AARP presidential forum in Iowa, Biden drew a contrast between his plan, which would give people a Medicare-like public option, and the “Medicare for All” plan championed by more progressive Democratic presidential candidates including Sens. Bernie Sanders (I-Vt.) and Elizabeth Warren (Mass.).

Biden’s speech echoed the now-infamous “if you like your doctor, you’re going to be able to keep your doctor” catchphrase former President Barack Obama repeatedly said in 2009 and 2010 when he was trying to sell the public on the benefits of the Affordable Care Act.

The GOP seized on those remarks, and spent years throwing them back at Democrats to showcase what they said were ObamaCare’s failures. In 2013, PolitiFact called “if you like your health care plan, you can keep it” the “Lie of the Year.”

But the law has provided 20 million people with health insurance, and it’s now more popular than ever.

Biden is running on protecting ObamaCare. He is banking the law’s popularity will convince voters that his plan of shoring up the law with more subsidies and a public option is a better approach than Medicare for All.

“You get your choice, you get full coverage … I think it’s the quickest, most reasonable rational and best way to get to universal coverage,” he said.
In formally announcing his plan on Monday, Biden equated the push for Medicare for All with the GOP attempts to repeal ObamaCare.

“I understand the appeal of Medicare for All, but folks supporting it should be clear that it means getting rid of ObamaCare, and I’m not for that,” Biden said in a video announcing his plan.