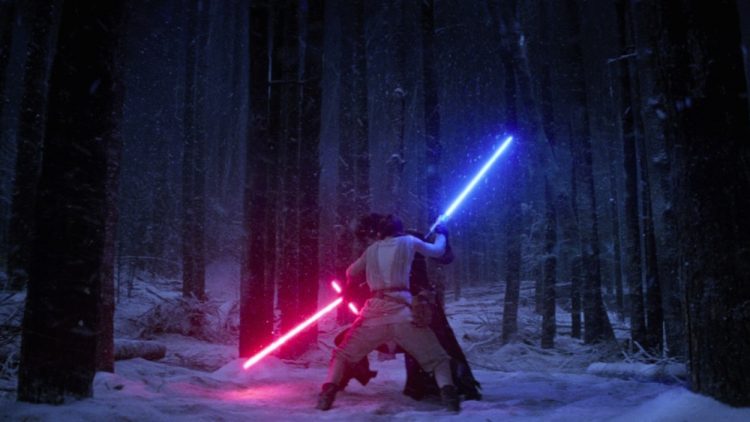 This is the eighth in a series of reviews I am writing for each of the live-action theatrical Star Wars films. I’ll be reviewing the films in release order in order to give the proper historical context for each film. I’ll also be grading and ranking each film as I go. This review will contain spoilers.

Disney’s purchase of Lucasfilms in 2012 sent shockwaves throughout the film industry, and it was no surprise that plans for a new trilogy of Star Wars films was immediately placed on the docket. Lucas’s initial ideas for a trilogy, while considered and integrated in some ways, were mostly discarded in favor of a story from the new creative team. Despite an initially rocky production that required moving the film back six months from Memorial Day 2015 to Christmas 2015, the film released to rave reviews and became one of the highest-grossing films of all time as well as the highest-grossing film of all time at the domestic box office, beating the previous record holder Avatar by nearly $200 million – a rank it holds to this day, even after the juggernaut that was Avengers: Endgame.

I absolutely love The Force Awakens. It’s the first movie I ever paid to see more than once in my life (I saw it three times), was the very first film in my Blu-Ray collection (now numbering over 100 films), and is the film I credit for my renewed interest in movies. The memories I have from seeing it for the first time are forever seared into my mind – from the initial attack of the Stormtroopers on Jakku to the climactic duel on Starkiller Base, I was enthralled from beginning to end.

In terms of direction, The Force Awakens is an incredibly well-made and directed film. Visually the film draws more from the “used future” of the original trilogy than the pristine shine of the prequel-era Republic, but it is influenced by both and truly feels great. JJ Abrams directed the film insanely well – just in the first act you have remarkable scenes like the almost entirely score-drive introduction of Rey is genius and enthralling, the exhilarating escape of Finn and Poe’s from the Star Destroyer, and the incredible aerial dogfight between the Millennium Falcon and a squad of TIE Fighters. On a pure entertainment level, The Force Awakens embraces popcorn thrills more than any film in the saga, except the original, and it pays off.

On a story and character level, the film also really works. Comments on the film’s similarities to the original Star Wars are generally overstated, especially in a saga that relies heavily on circular patterns and the fundamentals of the hero’s journey. While there are some base-level similarities, the films really don’t share much in terms of structure, character, or pacing. The one element of the film that feels a bit unneeded is Starkiller Base, but even that superweapon brings something new to the table — planetary system destruction through hyperspace. It’s the superweapon to end all superweapons and it’s hard to envision the series going back to that angle again.

As far as the acting goes, it’s impeccable. Characters like Rey and Kylo Ren have etched themselves as some of my favorites in the series, and the energy brought by the cast really can be felt. Both Rey and Kylo manage to be sympathetic leads — Rey in her quixotic fixation on her parents, Kylo with his pull to the light side. The film as a whole is confident and assured. Harrison Ford and Carrie Fisher are also both excellent, bringing both the ties to the original trilogy and the film’s emotional core — the relationship between Rey, Kylo Ren, and Han Solo. John Williams also brought his A-game with an elegant, sophisticated score that combines new and old themes into something great. Rey’s theme is the obvious standout, but the themes of the Resistance and Kylo Ren are both impressive as well.

As far as issues go, I don’t have a whole lot aside from a handful of nitpicks that really don’t do much in the grand scheme of things. I would say the first two acts are ever so slightly better than the third (although the lightsaber duel ranks among the best in the series) and the political dynamics could have used a bit more explanation, but really there’s not much I dislike. This is a really, really great film and absolutely deserves all the praise it receives. In terms of my rankings, I’d place it a hair worse than Star Wars and a hair better than Rogue One, but the difference between them is negligible – I still love it just as much as I did four years ago, and it’s always going to hold a special place to me.