Episode II: Not A Lot of Clones Attacking 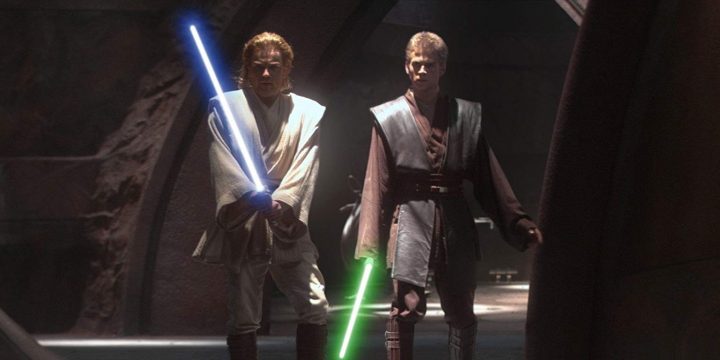 This is the fifth in a series of reviews I am writing for each of the live-action theatrical Star Wars films. I’ll be reviewing the films in release order in order to give the proper historical context for each film. I’ll also be grading and ranking each film as I go. This review will contain spoilers.

The story of Attack of the Clones is the story of missed opportunities. The Phantom Menace was undeniably a commercial smash – by the time it finished its theatrical run, it had grossed nearly a billion dollars worldwide and become the second-highest grossing film of all time after only Titanic. As a cultural phenomenon, Star Wars was back and more profitable than ever, and casual filmgoers seemed generally satisfied with the final product. At the same time, critics were lukewarm on the film, and the Star Wars fandom left bitterly divided. Anger existed to the point that two of the stars of The Phantom Menace, Jake Lloyd and Ahmed Best, were subjected to vicious harassment by deranged fans.

Facing this wave of fan backlash, George Lucas was understandably reluctant to begin writing the next film in the trilogy. Although we can’t know for certain, some elements of Attack of the Clones seem like clear responses to The Phantom Menace; Jar Jar Binks is sidelined as comic relief in favor of C-3PO and R2-D2, the level of action is heightened, and the film generally comes off as more serious and less kid-friendly. The film, if anything, serves as a clear transition from the bright optimism of The Phantom Menace to the darkest entry in the saga, Revenge of the Sith. As a whole, however, Attack of the Clones is a disappointing step back that is far more boring than it has any right to be.

Attack of the Clones was only the third film ever to be shot entirely on digital cameras and certainly the largest one in scope at the time. While this is undoubtedly an impressive achievement, and one perfected by the time of Revenge of the Sith, the new technology clearly showed its limits here – as did the CGI. Organic sets are sidelined in favor of completely digital creations, and about the only thing to actually look better than in The Phantom Menace are the purely digital battle scenes and the new CGI Yoda. The direction generally comes off as generally flat and uncompelling and a lot of the CGI simply doesn’t hold a candle to even the practical sets in The Phantom Menace.

The score is also disappointing, but not because of the work of John Williams. What he composed for the soundtrack is truly excellent, particularly “Across the Stars” – what isn’t excellent is the amount of cut and tracked music. David Collins explained this in great detail in the excellent Star Wars Oxygen series, but the gist of what happened is that the digital creation of the film allowed Lucas to edited it until literally the last minute. Because of this, Williams wasn’t able to truly compose for every scene like he normally does, resulting in much of the score being tracked music. Leitmotifs are often ignored, most offensively so in the battle droid factory sequence where Yoda’s theme is nonsensically employed with Yoda nowhere near the action. This is incredibly distracting to say the least.

Another step back comes in the dialogue department, and there’s no sugarcoating it; it’s often quite bad, especially in the romantic scenes that are so crucial to the film’s development. It’s not all bad, and the actors do their best with the work, but infamous scenes like Anakin’s tirade against sand or his angry recounting of his slaughter of the sand people became memes for a reason. The acting, while generally competent, isn’t remarkable in any way, and Hayden Christensen in particular gets the worst of it. I place the blame squarely on Lucas: Christensen is actually a good actor, certainly looks the part of Anakin, and is better in Revenge of the Sith. His material here just isn’t something that’s remotely easy to work with.

The plot is also a weak point. This is one of the longest Star Wars films but it feels the least substantial. The politics in particular are underwhelming. While we are informed of the threat of the Separatists and of their leader, Count Dooku, but we don’t ever actually learn why they are ostensibly separating. The film does effectively reveal them to be a front for greedy corporations, which is certainly an interesting concept – but the systems themselves are leaving for some other reason that is never really explained. Dooku is an intimidating villain and the late great Christopher Lee plays him well, but I don’t buy him as a charismatic leader. The best sequence is probably the one on Tatooine: it actually feels connected to The Phantom Menace, gives closure to that part of Anakin’s life, and introduces the Lars family in an interesting way. I’d even go so far as to say the death of Shmi Skywalker ranks as one of the best emotional moments in the series – it’s the one area where Christensen is truly given compelling material.

Another mixed bag is the action. Some of it is actually quite good – I really enjoyed the speeder chase at the start of the film and Obi-Wan, Jango Fett’s space battle is fun, and the actual attacking of the clones in the third act is truly epic. At the same time, a lot of the action is padding, the lightsaber fight is incredibly underwhelming, and the battle droid factory fight – a last-minute addition – is the single worst action sequence in the entire franchise. The fact that both of these come in the third act really detracts from the excellent coliseum battle and the massive droid-clone battle.

While I seem really negative here, I don’t really hate Attack of the Clones – I think it’s a watchable film, but also a frustrating and disappointing one. It’s my least favorite film in the series by a substantial margin and one I just don’t look forward to rewatching. It’s not an awful film so much as it’s relentlessly mediocre – and that’s a shame for a Star Wars film.