A Star Wars Double Feature: Rogue One and Solo 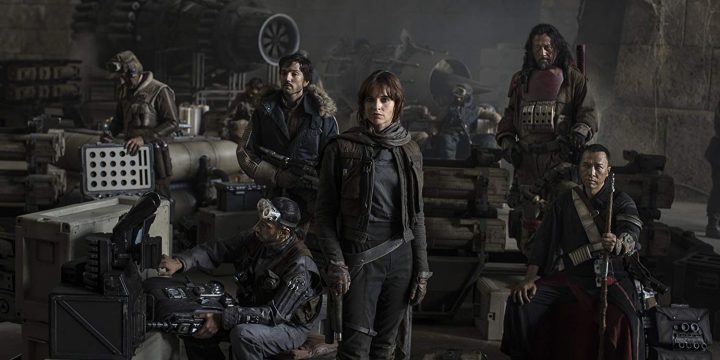 This is the seventh in a series of reviews I am writing for each of the live-action theatrical Star Wars films. I’ll be reviewing the films in release order in order to give the proper historical context for each film. I’ll also be grading and ranking each film as I go. This review will contain spoilers.

Time for a detour! Having just explored the prequel trilogy, now seems like the perfect time to look at the two other live-action Star Wars prequel films – the Star Wars Story duology of Rogue One and Solo.

The idea of spin-off films based around the Star Wars universe isn’t actually a new one – both the infamous Star Wars Holiday Special and the Ewoks television films were heavily promoted, while the 2008 theatrical animated film Star Wars: The Clone Wars marked the beginning of the acclaimed television series. However, the idea of live-action theatrical Star Wars films set outside the Skywalker saga never got its chance until the purchase of Lucasfilms by Disney. The result? Two films that justified the concept while also presenting some of the biggest production challenges the series had ever seen.

Rogue One: A Star Wars Story was an unknown quantity for Lucasfilms. Following right off the heels of the critically acclaimed commercial juggernaut The Force Awakens, it couldn’t help but seem like smaller project, and when word got out about its production woes hopes couldn’t have been lower. It was a surprise, to be sure, but a welcome one when the film was released to positive reviews from critics, and it was an even bigger one when it grossed $1 billion worldwide – a staggering sum for a spinoff film.

Since its release Rogue One has been regarded by many as the best of the Disney Star Wars films, and it’s not hard to see why: the film is absolutely stunning, with a truly epic scope as well as phenomenal set design and effects that perfectly capture the “used future” the original trilogy presented. More than any of the newer films, this one feels like Star Wars. Additionally, the acting and effects are all top-notch, with each member of the ensemble cast getting a chance to shine. The connections and nods to the prequel and original trilogies feel not only organic, but needed, and it truly does feel like a bridge between the eras.

While the first two acts are generally excellent and feature some standout sequences, the crowning jewel of Rogue One is its third act, the best in the series in my opinion – extensive reshoots were performed almost exclusively in this part of the film, and every penny seems to have been well-spent. This is almost the Star Wars version of Saving Private Ryan: a story of sacrifice and heroics that engrosses you the further it gets. Is there fanservice? Sure. Is it awesome? Absolutely. The hallway sequence with Vader alone was worth the price of admission three times over for me.

Another high point is Michael Giacchino’s brilliant score, which he wrote in only four weeks. Like the film itself it truly captures the idea of a spinoff: the familiar Star Wars motifs are here, as are many of the exclusive ones in A New Hope, but the new pieces are stunning as well, blending perfectly into the film. George Lucas once described A New Hope as a “silent film”, in the sense that the music drove the film forward, and there’s no better example in the series than in “Your Father Would Be Proud” as the film closes.

On the whole, it’s hard not to love Rogue One, and I absolutely adore it as a film. Even most critics of the newer films seem to appreciate it, and I see it as proof that Star Wars is worth continuing. There are absolutely more stories to tell, and Rogue One is one of the greatest.

Like with Rogue One, the development of Solo was riddled with issues, culminating in the firing of its original directorial team. Ron Howard was brought in to stabilize and complete the project, and the result was the entire film essentially being shot twice. While it received generally positive reviews, it underperformed in large part due to its absurd budget. Was it deserved? I don’t think so, but Solo isn’t the most compelling idea for a film, and its lack of ambition certainly limited its commercial prospects.

I honestly don’t have a lot to say about Solo. It looks very nice, similar to Rogue One, and features excellent performances and a fun story that leans hard into the idea of Star Wars as a western. The twists and turns make for a fun and exciting experience, but it doesn’t really stick with you long. Solo is by no means essential viewing, but it’s a good time with some genuinely stunning setpieces, especially the incredible Kessel Run sequence. The score from John Powell is also magnificent, leaning just hard enough into nostalgia while still tracing its own path. There are no Jedi to been seen here and no signs of the Force, just a lot of simple tricks and nonsense.

The problem with Solo is its lack of ambition. Star Wars was always an event, but Solo just feels kind of ordinary. There’s nothing really wrong here, but it on the whole it just doesn’t feel special. There isn’t the naked ambition of the prequels or the energy of the sequel trilogy. Simply put, for Star Wars simply good just isn’t good enough. I really hope Disney revisits spinoffs, but if they do they need to make it worth it. There are so many great stories that can be told, so every one of them should be special.