Rise of the Ewoks: Episode VI: Return of the Jedi 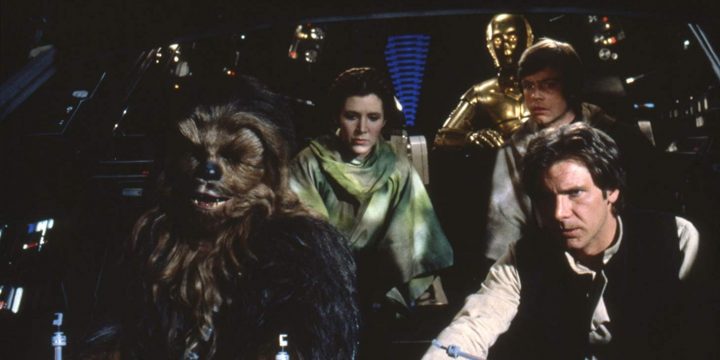 This is the third in a series of reviews I am writing for each of the live-action theatrical Star Wars films. I’ll be reviewing the films in release order in order to give the proper historical context for each film. I’ll also be grading and ranking each film as I go. This review will contain spoilers.

Creating the sequel to the one of the best movies of all time is never easy, and making one for two of the best can be almost impossible. While it’s not a perfect film or on the same level as its predecessors, 1983’s Return of the Jedi is a satisfying and emotionally compelling finale to the original trilogy.

At its core, Return of the Jedi is a less complex film than Empire is. The cross-cutting between separate plots that characterized Empire is gone for much of the film. Instead, we have a lengthy opening sequence where Han is freed from Jabba the Hutt, and then a second sequence focusing on the attack on the Death Star II – there isn’t a true “B” plot. The characters retain their complexity, however, and grow and mature in interesting and organic ways. With the exception of the deliciously evil Emperor, played superbly by Ian McDiarmid, every character is multi-layered and interesting, especially Luke and Vader.

The film also has a bit of a downgrade in terms of direction, as Richard Marquand, while clearly capable, wasn’t on the same level as Lucas or Kershner were. What is an improvement is the action and effects — the monsters and Jabba are expressive, unique, and visually iconic, the final space assault on the Death Star II is breathtaking and holds up today, and the lightsaber duel is the best the original trilogy has to offer with impressive stuntwork and pacing.

Where the film falters a bit is the story department. Aside from the conflict between Luke and Vader that underpins the entire film, the plot just isn’t as interesting as the previous films. The opening breakout of Han sequence is fun, but it’s also convoluted and the various twists the plan takes verge on the ridiculous. It works, but only barely, on the strength of great acting and excellent character moments. The addition of a new Death Star is also something a lot of people take issue with, but I feel the film actually explains the reason for it existing quite well. It makes sense in context, even if it’s a bit lazy. The second act also drags at points, as much of the plot revolves around the threat of the Ewoks, who are frankly not threatening at all. It’s hard to imagine the heroes being at actual risk.

However, the third act is where Return of the Jedi truly thrives. After Empire cut between two separate stories in the finale, Jedi took it to the next level crosscut between three separate stories in the finale — the ground battle on the moon, the dogfight above the moon and the iconic throne room sequence. The Ewok stuff is all well and good, but the final two are masterclasses in suspense, and the throne room sequence is one of the best in the entire series. Everything about it just works: the Emperor is menacing, there is clear and obvious tension between Luke and Vader, and Luke’s temptation is incredibly well presented. The choice of Vader to save his son – a gutsy choice that could easily have gone wrong – is pulled off to perfection.

Overall, Return of the Jedi is a good film. There are more visible flaws and issues than its two predecessors, but it manages to be a fun, entertaining, and thoughtful film still. It’s a good bookend to the trilogy and to Lucas’s original six films. For the saga as a whole, it’s very much a middle-of-the-road film to me. There are many other films in the saga I’d rather watch, but otherwise, it’s a worthy addition.

Of course, one issue remains — the Special Edition release of the film. To be frank, the Special Edition of Return of the Jedi is the worst in the series by a large margin and the only one I refuse to watch. If you want to watch this film, you owe it to yourself to track down an original theatrical version, be it Harmy’s Despecialized or the excellent 4K83 project. Why is this one so bad? It’s simple: the “updated” musical number in Jabba’s Palace is appalling. It’s an ear-grating, distracting, horrendous CGI number that outright kills the mood and distracts from what is otherwise a good film. The Blu-Ray introduces another major flaw by ruining the throne room sequence with a new, unnecessary “noooooo” from Vader. Avoid the Special Editions of Jedi like the plague – they drop the quality of the film a whole letter grade, if not more.

Tags: EwoksReturn of the JediStar Wars