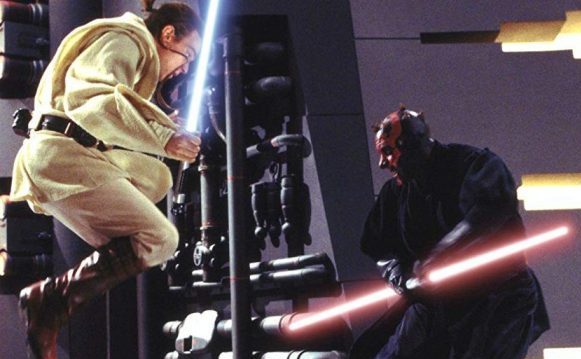 This is the fourth in a series of reviews I am writing for each of the live-action theatrical Star Wars films. I’ll be reviewing the films in release order in order to give the proper historical context for each film. I’ll also be grading and ranking each film as I go. This review will contain spoilers.

Following the release of Return of the Jedi, the announcement of new Star Wars films seemed inevitable. George Lucas never planned on a sequel trilogy, but the idea of prequel trilogy fascinated him and was an idea that never really went away. Even still it took almost a decade for the films to be announced. Lucas had lofty goals for his new trilogy – the films would be technologically cutting-edge and the story would be an epic tragedy, transforming the series from the story of Luke Skywalker to the story of Anakin Skywalker. The series would also answer so many of the questions the original films set up – what the Clone Wars were, how the Republic was transformed into the Empire, and how the Jedi Order were nearly wiped out.

While Lucas decided to write the films, the prospect of Lucas directing them seemed faint – he admittedly doesn’t really like directing films, and shopped the film to, among others, Ron Howard, Robert Zemeckis, and Stephen Spielberg. These three directors were inspired choices: Ron Howard is a consistent and professional filmmaker with some truly phenomenal films, Robert Zemeckis is a technological master intent on expanding the way films are made, and Spielberg is probably the single-greatest blockbuster director of all time. All three of these directors turned Lucas down, however – they felt only Lucas himself could realize his vision.

What is left in the prequel trilogy, then, is in effect the work of a singular artist. Not to play down the work of the amazing practical and digital effects artists, but Lucas wrote and directed every prequel film – this is his trilogy, the way he wanted it to be, and the entire world was ready. After a decade and a half of waiting, George Lucas unveiled the most anticipated film of the century on May 19, 1999 with a reaction almost nobody was expecting.

This review will not focus on the divided fan response to The Phantom Menace, but any review is incomplete without noticing. Critics were generally lukewarm on the film and audiences ate it up, grossing nearly a billion dollars by the end of its theatrical run, but many committed Star Wars fans undoubtably left disappointed or angry, with some calling it one of the worst films ever made. Only now, two decades later, has the backlash to the prequels really subsided as a new generation of Star Wars fans can now voice and defend the films they grew up on.

So how is The Phantom Menace, divorced from expectations and anger? It’s a decent, serviceable, and very uneven film that juggles some great ideas, setpieces, and incredible ambition with some annoying and unsatisfying elements. It’s a film I like, and a film I’ve seen more times than I’d like to admit, but let’s go over the positives first.

I actually really like the pacing of The Phantom Menace. It’s a more deliberate and slower-paced film than any other in the series, but I think it benefits from solid worldbuilding because of it. My favorite section of the film is the middle segment on Tatooine – I genuinely love this part of the film. For all the claims of weak, bland characters, this is where things shine for me. Shmi Skywalker as a character is one of the most underrated in the series, Watto is an effective adversary, and the podracing sequence still stands out as incredibly fun and well-paced.

I also really appreciate the politics. For all the people bemoaning the fact that Star Wars dared look at the “boring” realm of politics, in hindsight this is the one aspect of the prequels that has aged the best. The political situations in the film are well-explained and also incredibly realistic: wars and dictators don’t emerge in a day. They come from the smallest of conflicts, abused and stretched far beyond their usual importance. World War I started with the assassination of a minor member of royalty; the end of the Republic began with the taxation of trade routes. Palpatine is also a great villain – if you didn’t know he was the bad guy, his efforts to “help” his people and end corruption seem heroic. The Senate portion of the film, as an adult with a keen interest in politics, is really excellent. The movie looks and sounds great, despite a few aged CGI effects, which really helps add to the idea of a massive universe with many unique worlds and people.

Finally, I find most of the action to be excellent. The second lightsaber fight is not just the best of the prequel trilogy, it’s one of the best in the series. Far from a weightless, over-choreographed fight, it’s intense, grounded, and entirely satisfying. In fact, it’s such a good fight that it overshadows the rest of the four-way crosscut finale. I also think the brief first lightsaber fight is excellent as well, providing a bit of tension and energy in the middle of the story.

Of course, The Phantom Menace is not perfect. Not even close. The Gungans as a whole don’t really add much aside from a beautiful underwater city, and Jar Jar Binks nearly derails the entire film with his early antics. While these are thankfully toned down as the film goes on, his early appearance is so grating that I can understand why many despise him. Jake Lloyd is not the best choice for Anakin, but he’s not an entirely lost cause – he’s just not that good. Fully half of the four-way finale isn’t really that interesting – the space fight is relentlessly average and the Gungan ground fight really fails to engage, in part due to the inability to take them seriously. The addition of a Chosen One plot is cliched, the dialogue gets a bit stiff at times, and the addition of some juvenile humor is really out of place. Some of the characters are also not really elaborated on enough: Darth Maul only has a handful of lines, the Trade Federation are greedy for the sake of greed, and so on. If you like nitpicking, this is an easy film to nitpick.

On the whole, The Phantom Menace is a decent film. It’s a film can watch, enjoy, and even admire to some extent in spite of its many shortcomings. It’s not a great film, but it’s far from the disaster so many claim it to be.