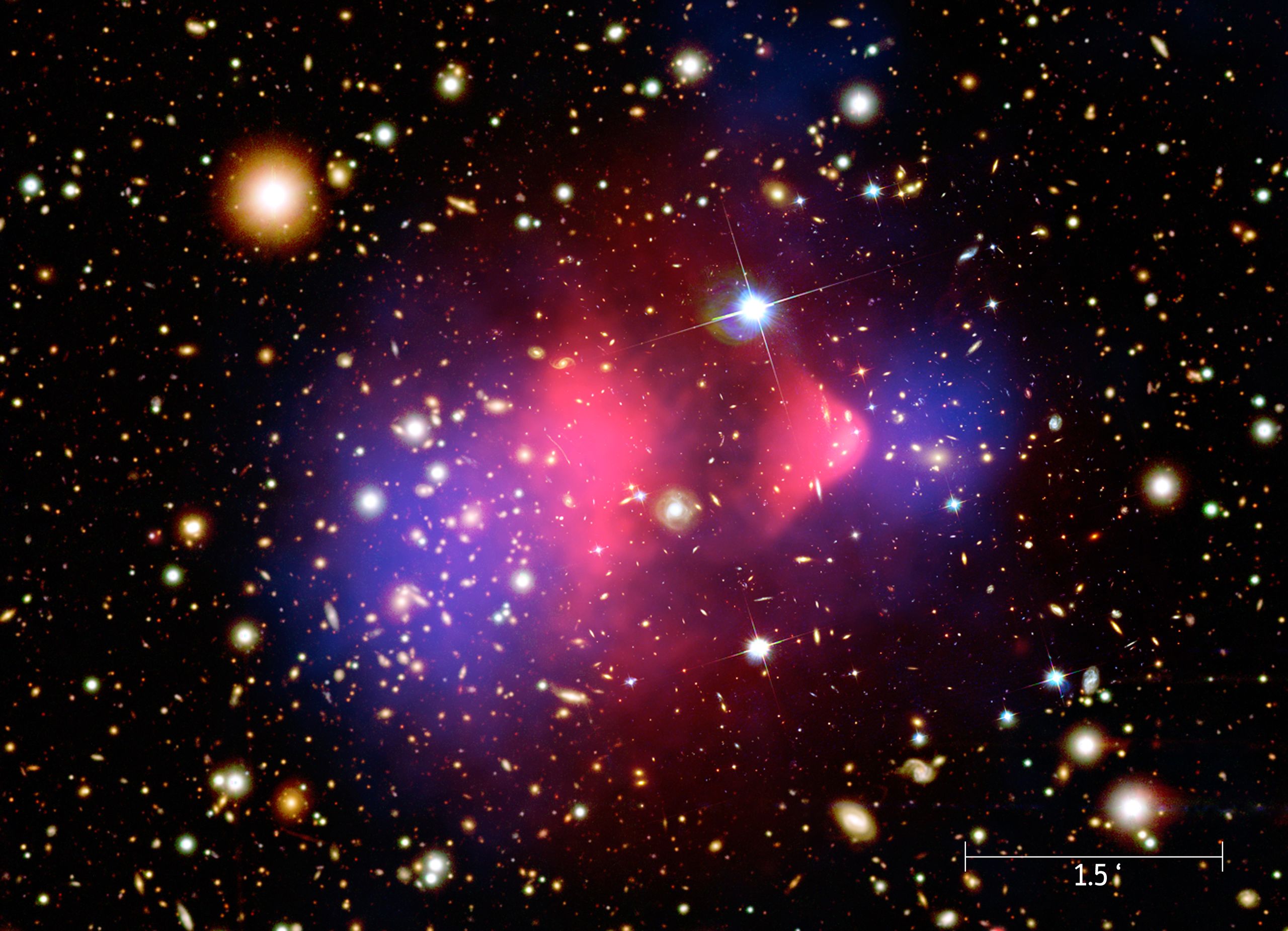 [ThTh1] One of the most mind-shattering discoveries in human history was the reality that the stuff we are made of — the atoms and molecules that make up our world and the things we deal with on a daily basis — represent only a tiny fraction of the universe. Over the last century, we first discovered that the mass of the universe is dominated by something called dark matter — a form of matter that does not give off light but whose presence is revealed by its gravitational influence.1 We have yet to detect dark matter, but the search for it goes on, with the most favored candidate right now being subatomic particles similar to neutrinos.

About 20 years ago, however, a discovery made dark matter seem small by comparison. We discovered that as the universe is expanding it is accelerating due to a force called dark energy. Dark energy, which comprises a whopping 70% of the universe, is something we are only beginning to formulate questions about, let alone understand. In short, 95% of the universe is a mystery to use, only detected by its influence over the vast scales of the cosmos.

The last couple of weeks have seen a bunch of headlines claiming that the existence of dark matter may have been disproven. Instead, these articles claim, the evidence we see is not that of the mysterious influence of dark matter but of a hole in our understanding physics. Modified Gravity or MOND posits that at very low accelerations — too small to be measured in a laboratory but regularly occurring on cosmic scales — Newton’s Laws of motion change. This would explain away most (but not all) of the phenomena that dark matter supposedly explains.

Let’s back up a step.

On those occasions when I teach astronomy or give a public lecture that touches on dark matter, I cite seven pieces of evidence that Dark Matter is real:

I consider the Bullet Cluster the smoking gun for dark matter and it is a frighteningly elegant argument. Below is a picture of this cluster. Two clusters of galaxies are in the process of colliding. A galaxy clusters consists of hundreds or thousands of galaxies like our own Milky Way, a much more massive amount of hot intracluster gas and, theoretically, and even larger amount of dark matter. When the two cluster collide, the galaxies go right through the collision, passing each other like ships in the night, only rarely interacting. You can see them in those clumps of bright points on either side. Eventually, they will circle back and merge into one giant cluster, but we catch them in this moment when they are still in flux. 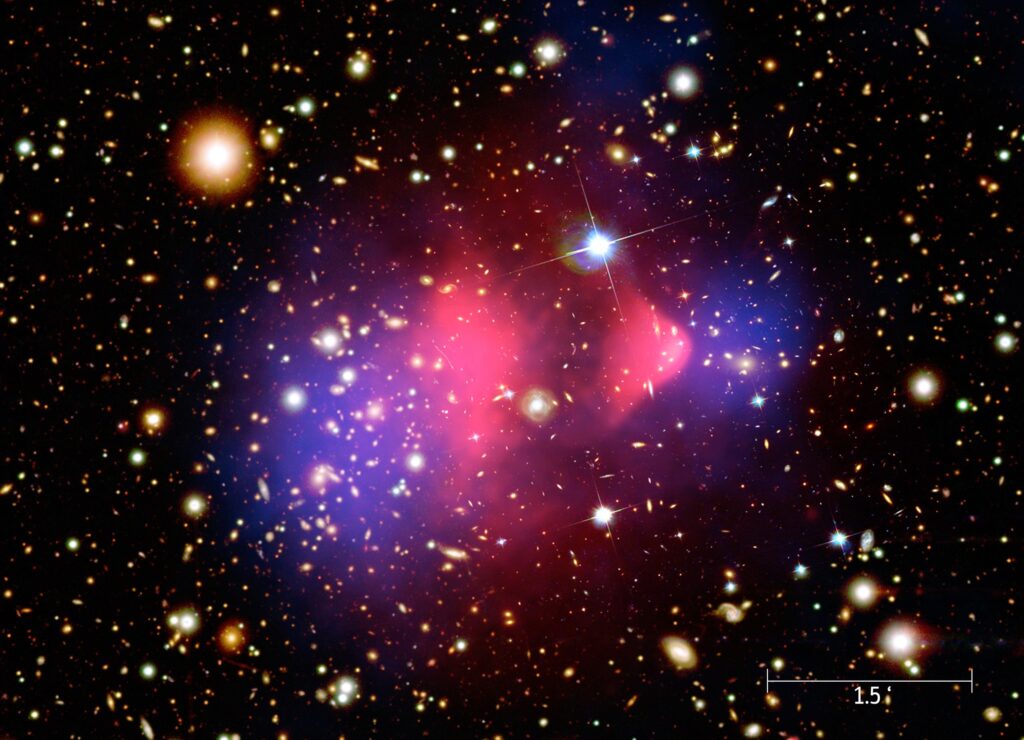 The hot gas, by contrast, is almost like a liquid. The gas from the two clusters smushes together into a giant hot gas cloud that stays at the center of the collision and will form the core of the newly formed cluster. The red light is showing you the X-ray emission from the gas.

If there were no dark matter, we would expect the bulk of the cluster’s mass to be in that soft gooey center where all the gas is, since it massively outweighs the galaxies. But when we look at gravitational lensing (the blue areas), it shows that the cluster’s mass is not where all the light-emitting matter is. No, most of the mass is something moving with the galaxies. What could that be?

In a few hundred million years, this galaxy cluster will settle down. The galaxies and dark matter will move to the center of the collision and it will look … well, like every other galaxy clusters in the universe. But we happened to catch it at this moment in time when the dark matter and the ordinary matter are not in the same place. And this is the best argument yet that dark matter is real and that simply changing the laws of physics won’t make it go away.2

Even the MOND advocates have admitted that there is no way to explain the Bullet without invoking some amount of dark matter. But they argue that MOND has not been completely ruled out. That’s fair. But it’s worth noting that the entire motivation for MOND was to explain away dark matter.

My take on MOND was best exemplified in a comment I heard in a talk long ago: it’s not dead, but it’s never really been alive. It explains a lot of phenomena. But it is a bit ad-hoc. If you make one big assumption, it explains a lot and has made some successful predictions. But there is no MOND cosmological model — that is, a model for how the universe was created and has evolved. The detection of gravitational waves ruled out most MOND theories. And, as I noted, the Bullet Cluster can’t be explained without some amount of dark matter.

So, what is the new result? Well … to be honest, it’s a bit beyond my ken. What they seem to be showing is that the motions of galaxies within a cluster are consistent with the predictions of MOND and inconsistent with those of dark matter. And while this is interesting, it’s worth noting that we have been down this road with MOND before, where MOND successfully predicted something but it turned out that some tweaks to dark matter theory explained them as well.

Ultimately, this will only be resolved by a detection of dark matter particles. While this endeavor is ongoing, it has yet to produce a result. But we’ve had a few tantalizing hints. And I am fairly confident that we will eventually figure out what dark matter is. But until then … MOND shouldn’t be completely dismissed. It’s been shrunk but it has not been disproven. Yet.

[ThTh3] More information continues to trickle out on the COVID variants in the UK and South Africa. The UK variant does indeed appear to be more infectious, which is a much-feared scenario as infections spread exponentially. The South Africa virus is a little more concerning as it is both more infectious and may evade the antibody treatments. But there is no indication yet that either can get past the vaccines or acquired immunity. And the pharma companies have indicated that they should be able to modify the vaccine very rapidly if it becomes necessary, much like they do with the flu vaccine.

What this does, however, is put us into a foot race between how fast we can get the vaccine into people’s arms and how fast the new virus spreads. The more we vaccinate, the more we cut off the virus’s line of spread and the future mutations that would be likely to result.

I’ve said from the beginning that this is a war. The arrival of the vaccine was not V-E day; it was Normandy. We have a weapon, but we also have an enemy that is determined and clever. The most important thing you can do right now is not become a vector. Everyone who will die today will have gotten the virus through a dozen or more hosts. If even one of those had failed to transmit the virus, they would never have been infected and would be alive.

Break the chains of infections. Continue to observe safety precautions, get the vaccine as appropriate and wear a mask. It’s not over yet, as attested by surging caseloads and deaths. But we’re fighting as hard as we can. Now, more than ever, we need everyone to hold the line. We might be glimpsing the dawn, but the long night isn’t over yet.

Fireworks made with ~42 thousand earthquakes from 2020 in 30 seconds! All available for download from our map viewer Skjálftalísa (https://t.co/CAz1jFdaZ8) This year was quite the ride when it comes to natural hazards. Happy New Year! Made with @CARTO with data from @Vedurstofan pic.twitter.com/cnm5flAd05

[ThTh5] Room temperature superconductors would be a technological revolution. We know have them. Buuut … they only work at extreme pressures.

[ThTh7] NASA is reviving talk of a radio observatory on the moon. It’s a good idea even if their model looks like the death star. Putting it on the far side would shield from Earth interference and putting it above our atmosphere would allow exploration of ultra-low frequencies we’ve never looked at.