Memorial Day, From Far Away Lands

America will be celebrating Memorial Day on May 28th, 2018. Along with an extended weekend, folks’ thoughts will turn to the meaning of the holiday: honoring the fallen of American conflicts. But over 216K of them are buried or memorialized as missing in foreign lands. It brings to mind a long held sentiment, expressed well by then Secretary of State Colin Powell in 2003:

We have gone forth from our shores repeatedly over the last hundred years and we’ve done this as recently as the last year in Afghanistan and put wonderful young men and women at risk, many of whom have lost their lives, and we have asked for nothing except enough ground to bury them in, and otherwise we have returned home to seek our own, you know, to seek our own lives in peace, to live our own lives in peace.

The scale of the ground needed to bury them, administrated by the American Battle Monuments Commission,  is perhaps lesser known:

ABMC administers, operates and maintains 26 permanent American military cemeteries and 29 federal memorial, monuments and markers, which are located in 16 foreign countries, the U.S. Commonwealth of the Northern Mariana Islands, and the British Dependency of Gibraltar; three of the memorials are located within the United States. These cemeteries and memorials, most of which commemorate the service and sacrifice of Americans who served in World War I and World War II, are among the most beautiful and meticulously maintained shrines in the world. Visit ABMC Burial and Memorialization Statistics to learn about the number of men and women we honor around the world.

The exact number of dead who remain forever on foreign lands, will probably never be known: 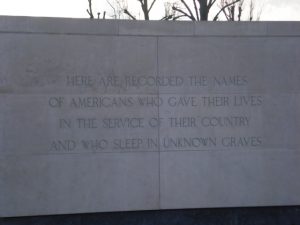 Similarly is Brookwood American Cemetery outside of London. It’s a communal cemetery, meaning non-Americans and non-war dead can be buried there. On a tour with the cemetery’s assistant director, Dickon was shown a wooded area far from the American portion. “He pointed to a bunch of gravestones and he said, ‘There’s a bunch of Americans over there that Americans don’t know about.’” In his research, Dickon found they were mostly Americans who had joined the British Royal Air Force or the Royal Canadian Air Force, but had been buried as Canadians or Brits.

Towards the end of WWI, 200 Americans were killed in Archangel, Russia. The transport ship Lake Daraga made three trips to bring home the dead between 1919, 1929 and 1934, but the records from the original voyage have been lost.

In the nation’s early years, most troops were buried where they fell. For some highly decorated officers, remains could be collected and sent back, but only if the family covered all the costs — which could be steep given they had to buy and ship a lead-lined coffin to meet the military’s requirements.

But the unprecedented scale of WWI meant an increasing number of families were pressing the government to remove that financial burden.

“The U.S. didn’t know how to bring back the fallen when the war ended,” said Tim Nolsal, public affairs director for the American Battle Monument Commission or ABMC.

Opinion, he said, was divided: some felt the bodies should be brought back to the U.S. Others felt it was honorable for soldiers to stay on the battleground. Ultimately, “the government decided to make it a decision for the next of kin,” Nolsal said. The family could have the body repatriated and buried in a national cemetery, or buried overseas in a national cemetery. Either way, the government picked up the costs. Only if the family decided on a private burial would the government only cover the costs of transportation and a headstone.

Across 10 countries, more than 130,000 Americans are buried and another 124,000 missing in action are memorialized by name in one of the 25 cemeteries overseen by the ABMC. They are mostly casualties of the world wars, Nosal says, because the option to be buried overseas ended during the Korean War. The missing in action include the Korean and Vietnam wars.

“Now, we bring everybody back,” Nosal said. 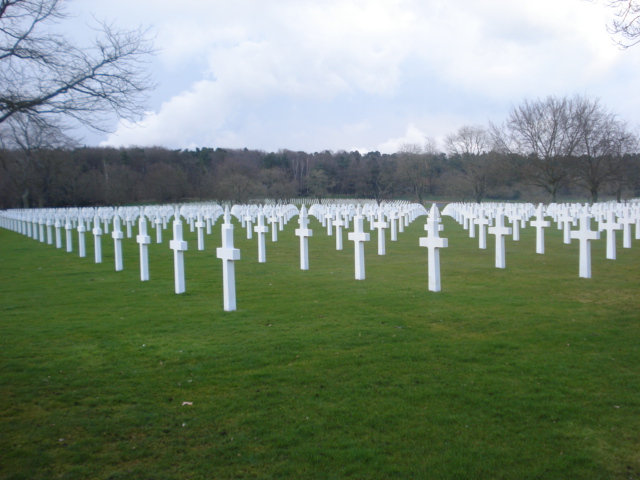