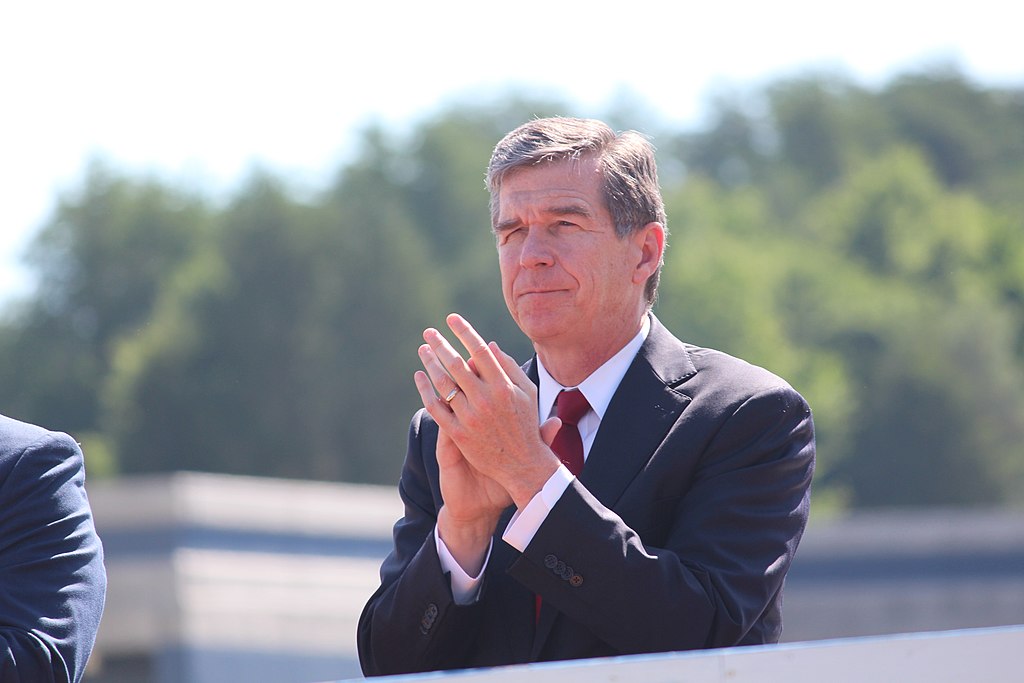 Roy Cooper might be America’s worst Governor. To some, that might come as a surprise. After all, wasn’t he just re-elected by a decisive majority and isn’t he a popular moderate? Well, like a lot of things in North Carolina politics, the truth is more complicated than that. And voters seemingly recognized this.

On election night, Cooper’s victory was effectively the only ray of hope in a grim night for North Carolina Democrats. A party that felt confident of a clean sweep saw almost no gains at all, even with redrawn maps. And Cooper himself may have lost his biggest legacy: his hand-picked Chief Justice on the North Carolina Supreme Court.

The Last of the Good Ol’ Boys

Like most Democrats of his time, Roy Cooper got his start in politics early. Growing up as the son of a lawyer in Nashville, North Carolina – a rural community with historic ties to the Democratic Party – Cooper would go to UNC-Chapel Hill and graduate with a law degree. While at the prestigious college, he became president of the Young Democrats. This enabled him to jump-start his career in politics, being elected to the state house in 1986. He caught a break when he was appointed to a vacant state senate seat in 1991. Quickly rising through the ranks, he would ultimately become the Senate Majority leader by 1997.

By this point, North Carolina had seen nearly 100 years of one-party control. Republicans had managed to wrest away the state house in 1994, but strong gerrymandering ensured a consistent Democratic lean. Cooper’s district was no exception. His seat, the 10th district, seemed surgically drawn to exclude as many black voters as possible, fairly consistent with a Democratic trend at the time. Like a good ol’ boy, Cooper vigorously – and unsuccessfully – defended his party’s gerrymanders in court. However, they were ultimately struck down as unconstitutional racial gerrymanders. Despite this setback, being in the upper echelon of Democratic power had its benefits. For Cooper, this meant a successful run for Attorney General – a possible steppingstone for the governor’s mansion.

You’d be hard-pressed to find Cooper’s accomplishments as Attorney General. His most notable feat was overseeing not one, not two, but three separate rape kit buildups. The late Kay Hagan, then a state senator from Greensboro, investigated in 2002 and found 20,000 rape kits had built up. Cooper faced scrutiny from the press and promised to clean up his act; he promised in 2004 to “never forget” the rape victims who saw their tests lie in wait. But in reality, his SBI adopted a policy of not testing rape kits without a paired suspect. By 2008, Cooper claimed to have fixed the problem, but local media found something even more egregious: rape victims were being charged for testing. In 2010, reports emerged of additional buildups, and these persisted all the way through Cooper’s 2016 bid for governor. Now, current Democratic Attorney General Josh Stein – a possible candidate for governor who just won his re-election bid – insists he’s cleaned the problem up, two decades later.

What was Roy Cooper doing all this time? Waiting to run for Governor. He could have run in 2008, but popular Charlotte Mayor -and Republican – Pat McCrory was seen as a highly credible nominee. The nod that time went to Bev Perdue, who would beat McCrory in a close race only to become the most unpopular governor in the nation. A red wave that ensued in 2010 saw Republicans swept into near supermajorities in both chambers of the legislature. With McCrory gunning for another run and widely favored to win, Cooper again declined to run for governor. This was a wise decision; McCrory won by over 11% while Mitt Romney carried the state by only 2%.

While McCrory campaigned as a moderate, the staunchly conservative legislature shifted him right. This culminated in HB2 – the bathroom bill, one of the stupidest pieces of legislation in the history of North Carolina. In response to Charlotte passing a non-discrimination ordinance, the legislature pre-empted all city-level non-discrimination laws. It also mandated access to all public bathrooms be limited by the biological sex listed on a birth certificate. McCrory signed the bill, and this substantially hurt his image as a pragmatic moderate.

Cooper had already plotted a run for Governor and made HB2 his central issue. Cooper ran a scorched-earth campaign against McCrory, and McCrory responded in kind. HB2 wasn’t the only issue, of course — he also targeted voter ID laws and the lack of Medicaid expansion. But it was almost certainly what let him narrowly win by around 10,000 votes over the incumbent even as Donald Trump and Richard Burr carried the state fairly comfortably. However, he faced a Republican supermajority, meaning he lacked the ability to halt legislation.

After 16 years of waiting, what did Roy Cooper do as Governor? Well, not much. North Carolina has one of the weakest executives in the country. Power is split among nine other executive officers, including a Lieutenant Governor that happened to be of the opposing party. The relatively recent veto power — introduced in the 1990s — doesn’t even apply to congressional and legislative lines. Despite his lack of leverage, it’s not necessarily impossible to make progress. Skilled moderates like Lousiana’s John Bel Edwards, Maryland’s Larry Hogan, and Vermont’s Phil Scott have all worked with heavily skewed legislatures to pass bipartisan bills,

Instead, Cooper adopted a strategy of confrontation. He signed a partial HB2 repeal that many on his side were unhappy with. He tried — and failed — to expand Medicaid by executive order. And he vetoed a record number of bills; for their part, Republicans ignored him where possible and overrode his measures. A great example of this is on school vouchers; while Cooper staunchly opposes them, the legislature has only expanded the practice. In protest, Cooper vetoed every teacher pay raise presented to him as insufficient. The end result wasn’t a compromise on school funding, but rather riled up bases on both sides.

As a result, Cooper has few real accomplishments. This was partially intentional; by doing this, Cooper gained cannon fodder to use to break the Republican supermajorities. On top of that successful effort, redrawn Congressional and legislative lines offered hope for new Democratic majorities. And meanwhile, through a mix of elections and appointments, Democrats were able to gain a 6-1 advantage on the North Carolina Supreme Court. This included the appointment of Cheri Beasley, a liberal justice, as the new Chief Justice.

Going into the 2020 elections, it was assumed that if North Carolina Democrats played their cards right, they could sweep statewide. Gaining one or both houses of the legislature, several hotly-contested statewide offices (like Lt. Governor, Treasurer, Labor Commissioner, and Superintendent of Public Education), and eliminating the last Republican on the court, Associate Justice Paul Newby, were all on the table.

Roy Cooper gained an additional benefit with the COVID-19 crisis. Because of the police powers inherent in the executive, Cooper was able to enact some of the strictest lockdowns in the country. His leadership was generally praised as steady and consistent – if not overbearing. A minority, however, loudly protested his actions. Reopen NC, a group led by anti-maskers, staged protests at the state capitol. Lt. Governor Dan Forest – the Republican candidate for Governor – sided with the protesters in many regards. This allowed Cooper to present the popular Forest as an extremist and public health menace.

On election night, it became clear the attacks had worked. Cooper defeated Forest by a 4.5-point margin – solid, but far from the double-digit landslide the polls projected. However, bad news came as the night rolled on. At the legislative level, Democrats had secured favorable new lines drawn by a Democratic mapmaker and amended mainly by Democrats. These lines were designed to eliminate all urban Republicans, providing the easiest path to a Democratic majority. However, Democrats not only failed to take either chamber of the legislature, but they also actually lost ground in the House, losing a net of four seats. This included losing house races in three of the state’s largest urban counties: Cumberland, Mecklenburg, and Wake.

All of the targeted statewide offices held for Republicans as well, and President Trump and Senator Thom Tillis also both won their races. Most shockingly, Republicans swept all five Court of Appeals races, securing a strong Republican majority. And as of the time of writing, they appear to have won all three Supreme Court races. This includes unseating Beasley by a margin of under 500 votes – pending a recount, of course. This means the vaunted 6-1 court will now be only 4-3, with a Republican Chief Justice. Republicans will also have four opportunities to gain a majority from 2020 to 2026 – two in 2022 alone. This could potentially rob Cooper of any lasting impact on the courts.

After four years of aggressive posturing and confrontation, Roy Cooper is now in no better position than when he started. Republicans still have a majority of statewide offices and in both houses of the legislature. They easily control the Court of Appeals and will likely have the Chief Justice’s office. They have a decisive majority of US House districts as well as both Senate seats. Medicaid still hasn’t been expanded and school vouchers still exist. Even worse, a Biden midterm presents a strong opportunity for Republicans to sweep the major races in 2022. Cooper doesn’t even have an escape valve as newly elected Lieutenant Governor Mark Robinson is a firebrand conservative Republican who would adopt a radically different approach to governance.

When Cooper’s singular focus over the last four years has been to secure a new Democratic majority, it’s hard to see his tenure as anything less than a catastrophic failure. Burning bridges with the legislature offered the potential for a short-term benefit, but in the long run, it’s hurt the state and himself. Now, Cooper is stuck without much real power and with few options to advance his goals. North Carolina is one of the fastest-growing states in the country. It has a diverse population and a need for real, modern leadership. Despite his seeming popularity — most of it based on image rather than policy — Roy Cooper is the perhaps worst Governor North Carolina could have right now. He’s a relic of a bygone age — not committed to any real ideological agenda beyond his party’s wants. One can only hope North Carolina’s next Governor can provide the leadership the Tar Heel State desperately needs.