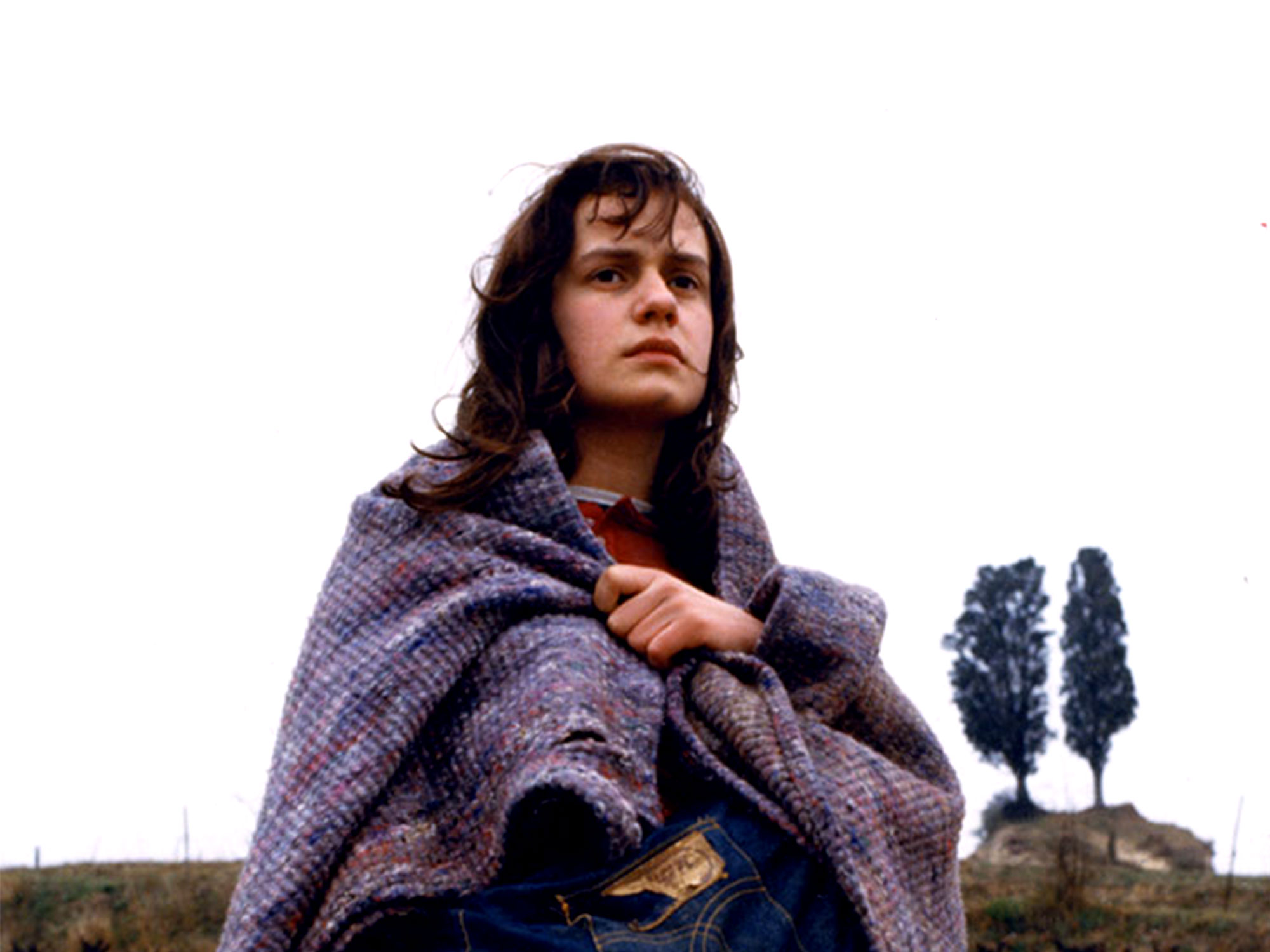 We are under no ethical obligation to assent to or condemn the behavior of fictional characters in works of art. Sometimes it’s very hard to remember that. And I think it’s hard for artists as well; they find ways to make us “identify” with their characters, to decide we like them or dislike them. They raise ethical questions in Act 1 and resolve them in Act 3. And having told a few stories, it really is hard not to give the audience the resolution you think they want, be it catharsis or closure or sweet revenge. We all know that life is messier than that, especially at its edges. But taking part in life is difficult enough; we want art to be easy.

Perhaps this is why Agnès Varda gives us the resolution of her masterpiece Vagabond* at the beginning of the film and then proceeds to take it away from us throughout the rest of the story. We start with a rather desolate vineyard in rural France in winter; an immigrant worker is making his morning rounds when he comes across the frozen body of a young female drifter lying in a ditch. The police come and retrieve her rigid corpse to dispose of it in a potter’s field. Varda’s voice comes on in a voice-over to tell us she always wondered about this vagabond, whose name was Mona, who Varda liked to imagine came out of the sea. And then we see her, when she was alive, walking nude from the ocean. The story is thereby set up like a murder mystery, except instead of wondering who killed Mona and why, we wonder who failed to save her and how.

Of course, homeless people die all the time, and if you’ve ever lived in even a small city, you’ve probably come across the dead bodies of one or two. Often, in this situation, we play amateur forensic pathologists, assigning various causes of death: drugs, mental illness, societal breakdown, bad parenting, or maybe they just “didn’t want to work.” Just tonight my friends and I were discussing how much more prevalent the homeless have become over the last few years in our “revitalized” city. And like most multicausal problems, no one seems to have a good solution. Most North American cities treat them like an invasive species they hope to push out. There are probably rational solutions, but people behave like the existence of the homeless is an ethical question they have to work out first.

One of the strengths of Varda’s film, which is shot in a pseudo-documentary style in which the non-professional actors speak directly to the camera, is that the director withholds any real explanation: all of the rural folk who have interacted with Mona speculate about her but she never addresses the camera herself, and she offers little information to anyone else. At one point, after hitching a ride, she even admits to the driver that she usually makes up details of her life for people who offer her rides. Varda knows that we want an easy explanation. But Mona doesn’t do drugs, aside from a fondness for pot and wine. She’s not mentally ill, although she seems to carry a mysterious eternal flame of anger. Of her background, we know only that she was once a secretary, didn’t like it, and quit, and now she wanders around.

We saw the same thing in Barbara Loden’s great film Wanda: there is something utterly compelling and subversive about a female character who is not particularly good nor bad, but simply interesting. The film plays on our curiosity and complicates our moral judgments. As Mona wanders around, the camera wanders too in long tracking shots- nearly always panning from right to left- that often continue past the character to some random point, as restless as a vagabond.

Mona gets a ride from a trucker who kicks her out when she doesn’t respond to his overtures; she sleeps in a tent in a cemetery; she tries to eat an inedible baguette; she gets a job washing cars and has sex with the boss, who then fires her; she lives briefly with a couple of hippie shepherds who resent her indolence- the pompous husband tells the camera: “By proving she’s useless she helps a system she rejects”- she seems to fall for a Tunisian migrant farmworker, but the other workers don’t want her on the crew; she “takes root” in the car of an academic who specializes in a disease killing plane trees, who then abandons her by the side of the road; a put-upon caretaker of a rich older woman puts her up until she seems attracted to the woman’s no-good boyfriend. Nothing ever seems to work out for Mona, and it’s never really clear that she wants anything to work out, or if she’d rather keep wandering.

And we see Mona, always, through other people’s eyes. Everyone is affected by her presence, most often troubled. The put-upon caretaker wishes her own boyfriend “would dream with me” like Mona and her lover of the moment. That lover imagined “she was a homebody, the staying kind.” The hippie goatherd muses “Maybe you’re freer than I am. Good for you.” A truly annoying grad student is assigned to recover her to assuage the academic’s guilt, but finds he is truly disgusted by her filth and her freedom. This is a theme in the film. Usually, we talk about “freedom” all the time, make it the advertising slogan for our products and politics, but we never truly accomplish it. An observer tells Mona: “You chose total freedom. You got total loneliness.” Another, who shares a bottle of champagne with her, asks:

“Champagne on the road’s better,” she responds.

The film is always watching Mona, always curious, but never comes to any real conclusions. If she has “chosen total freedom,” and it’s never fully clear, we know from the start that she will die for that choice. Varda doesn’t present this as her just deserts, but she realizes it is always a possibility.

Above all, Agnès Varda was a supremely curious filmmaker. As I’ve shared here before, I didn’t “discover” her; she discovered me, standing on a street corner by her shop in Paris. Mme Varda walked up and asked me, in cheerful French: “Have you discovered something?” Indeed, I had. I soon realized she was the great explorer of the French New Wave. And she is certain to be rediscovered by a whole new generation of English-speakers as the Criterion Collection is releasing a deluxe box set of her many films. Since the Criterion Channel streaming service launched a little over a year ago, I have been introduced to a few hundred new movies. Vagabond was the best.

Maybe it’s because it’s the most humane. Varda just observes these people, slowly revealing that they are more connected than they realize, as they try to care for this lost and lonely woman, and all fail. It’s not that they can’t love, but they don’t know how. And, we notice they are all about one step away from homelessness themselves. It’s not that there’s a “system” that limits their freedom exactly; they’re just trying to get by. In the end, the outcome is the same: we all make compromises because we know what the outcome could be.

All of these thoughts occur later, long after watching the film. Vagabond is masterful because the thoughts it evokes don’t come from ideology or didacticism, but from the filmmaker’s simple observational brilliance. We feel as if we’ve spent time with a desperate person who we could not help, although it’s never quite clear why not. And we realize how hard it is to reach another person or even know them. But, if a society is formed organically from the responsibilities we have to one another, why do we so often fail to meet them?

{* The French title: Sans toit ni loi (“With neither shelter nor law”) is a play on the common “Sans foi ni loi”/ Without faith nor law.}

So, what are YOU reading, watching, pondering, playing, or otherwise wrestling with this weekend?