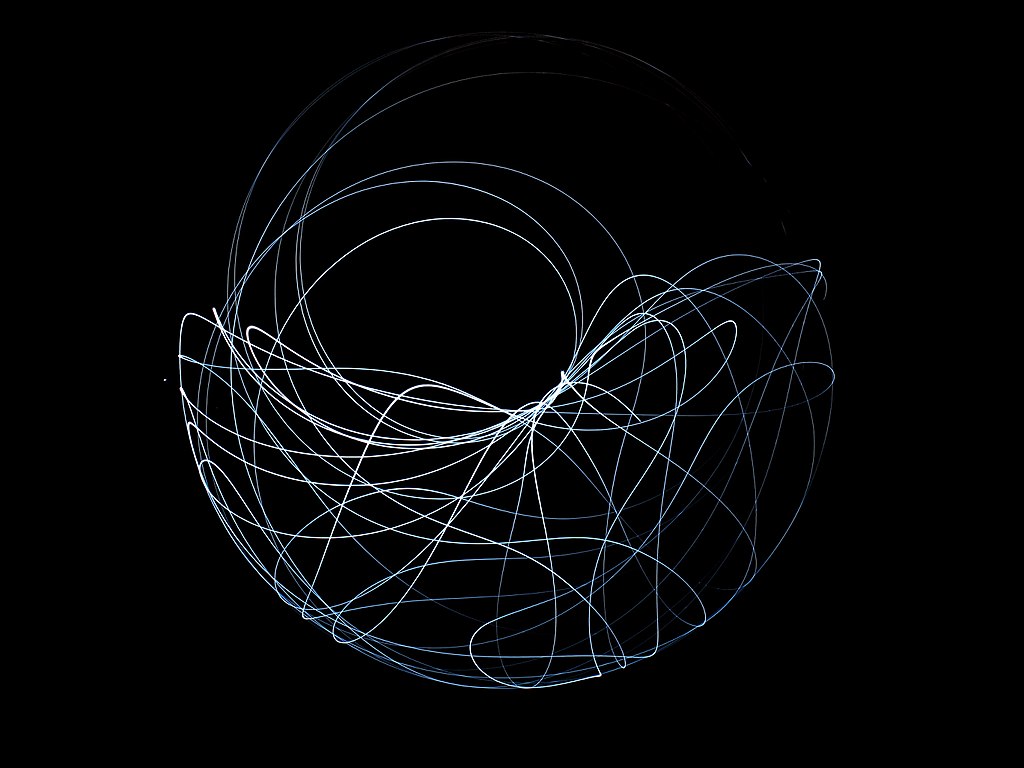 The butterfly effect is illustrated using a light source attached at the free end of double pendulum. This set of long exposure pictures shows the sensitive dependence on initial conditions in which a small change in one state can result in large differences in a later state, i.e. “small causes can have larger effects”. As can be observed, each light trace pattern (each picture) is unique. Picture by Cristian V. via Wikimedia Commons

Twitter is pure chaos. Curated chaos, but chaos nonetheless. It is a glorious example of spontaneous order. This is an economic philosophy concept first elucidated by F. A. Hayek. It is the order of chaos, essentially. It is how he described the price system in a capitalistic economy. How we all decide to engage in commerce at a level comfortable to us and how those billions and trillions of consumer decisions create the established price at any point in time for all goods sold in said capitalistic economy. Voluntary transactions are a two-way street. Both sides have to agree for a deal to be done. Yes, one side may be getting more out of the deal, but both sides still have a choice to walk away. It’s why I scoff at the morons who say Google, Apple, and Facebook are monopolies. No one is forcing you to use them, brophalom.

I consider myself an agent of chaotic good. My avenue of chaos? Information. When I share something with someone or the world at large (as in, through my Twitter feed,) I am sharing something I deemed interesting for whatever reason. New information is the coin of the realm to me. Will it be interesting to anyone else? Who cares? It’s out there now. Twitter is my avenue for looking over curated information through the people I follow. As I always say: “More information is more better.” (Yes, that doesn’t make grammatical sense on purpose.) That’s why I follow 5,000 people or so, although I’m at my following limit due to my less than 2,000 follower count. (Check out my bio for a link and give me a follow if you are so inclined.) If something is going on in the world, my feed is almost surely talking about it. Be it the death of a beloved character actor or some next level insanity in some far off country (or in the White House.) My feed is leagues better than the trending page and it always will be. Just like my 3,000+ song curated shuffle playlist will always be better than any radio station or DJ. Constant improvement and refinement.

Lots of people hate chaos. These mostly small-minded people (but I digress) are usually stuck in their ways such that they tend to recoil at any new information that challenges virtually anything they believe to be true and good. These people are usually the first to get nasty or defensive when you prove them wrong. “You don’t know everything!” Yes, but I certainly know more than you about this specific topic, brophalom. I delight in proving people wrong. Usually, this happens when I spout a provable fact that they disagree with for some foolish reason. It’s not like the fact can’t be checked in about three seconds on Google Search or Wikipedia. Like Chevy Chase being the Pete Best of Steely Dan or the rules surrounding Fair Use parody. Just totally random examples that I plucked out of nowhere…

But I am at my best when I am sowing chaos, for good. Information is the best avenue for this, be it sharing a cool new song I just discovered or some weighty philosophical current events article. Informing the world on anything and everything is just a side benefit of my pursuit of knowledge. My Twitter feed is basically my brain at any snapshot in time. It’s really fun. That reminds me, while I have you here, check out Ninja Sex Party. It’s an awesome comedy band that typifies the best of ‘80s power ballads.

You can trust me.