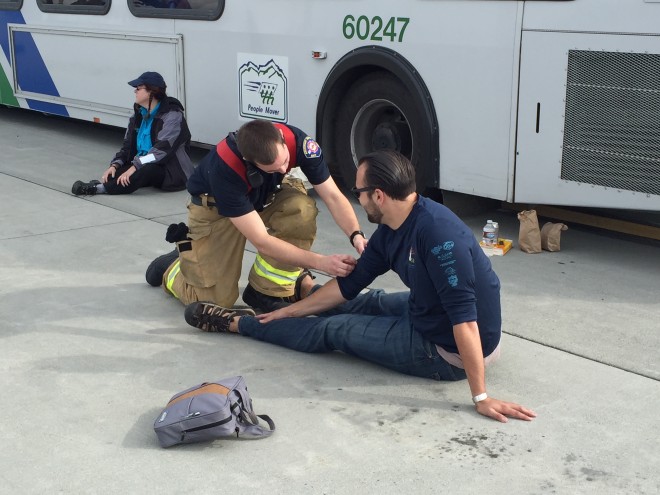 For many years I had to be CPR/First Aide certified for my job. I took the class every year.

There is always a part where the instructor partners up the whole class, where one person in each pair is the victim and the other is the rescuer. There is only enough time in the class to do the exercise once, so most of the time the partnership will not switch from victim to rescuer and vise versa. Because I took the class every year, I knew this was coming and anticipated it. I did this because one of my favorite things to do is pretend to be a victim with a stranger who is trying to do CPR and must flip my body over, or drag me correctly out of a “burning building.” Most people who play the CPR victim will help out; they’ll kind of flip themselves over rather than having a stranger really touch them. But I commit to being 100% dead weight. I love doing this, and secretly enjoy my front row seat to their surprise at me not helping as they struggle to move my 250-pound body.

I got to experience this enjoyment to its full extent recently when I visited my friend in Alaska.  We were talking over the phone about my upcoming visit and she said, “Oh, by the way, I went ahead and signed us up to volunteer to be pretend victims in a mass plane crash simulation at Ted Stevens International Airport. Are you down?”

I replied, “There is a reason that we are such good friends and the reason is that you had the instinct to sign me up for this. Thank you.” I was so ready to be on Oceanic flight 815. 1

Then before I know it, I’m in Alaska and we’re at the airport, and right from the start it is a dream come true. As we arrive, we are given badges with what our role is.  Some people are to be the walking wounded; some are to be dead; some just unconscious. I have the pleasure of being assigned a broken left tarsal.  The people in charge also explain that we are not to speak or respond to English. They want to simulate a plane crash from another country’s airline, one where the victims would not speak or understand the language of the rescuers.

To make sure we understand the rules, a trainer quickly yells “LOOK OVER THERE!” while pointing to his left; all of us volunteers look. The trainer says, “You have all failed. When we do the simulation, as best you can, pretend to not understand English. Act the part and take it seriously.” This is all to better train emergency responders of the city of Anchorage. It is also music to my ears. They are preaching to the choir and do not need to tell me twice.

We head out and get into position, which is on the tarmac in between active runways.  Planes are landing and taking off all around us, and God only knows what the people on those planes think is happening.  There are lifeless-looking bodies scattered around the ground, aimless survivors limping around, and a big old piece of airplane is on fire — sort of. Instead of a plane, they have two city buses on the tarmac to represent the crashed plane. In Anchorage they call city buses People Movers, which somehow seems demeaning to me. I am initially assigned to be a victim on the People Mover, but I decide my talents would be better suited outside the plane amongst the fake wounded and dead and the real lost-and-found luggage.

They blow the whistle and someone yells, “Start acting, the simulation is beginning!”  Most of volunteers aren’t really acting like they were in a fucking plane crash.  Their lack of enthusiasm really pisses me off, but it does not stop the Jay Train.

Before any of the rescue workers can get to us, they take a full ten minutes putting out the fake fire. And then halfway through that, they just turn around and leave.  Apparently, there is a real emergency and they have to go save the day somewhere else in Anchorage. So, we sit and wait. An hour later, they blow the whistle and say, “They are coming back, start acting.”  Game on.

After putting out the fake fire, it is the professional firefighters who come on the scene to save the people, while the police stay in the safe zone helping victims and getting I.D.’s from people. The cops are really into this exercise, taking it seriously. The firefighters are not. The firefighters slump onto the crash site and break character and the fourth wall. They are not really participating. They are mean to the volunteers, making fun of us and in general just being jerks the way most firefighters are. You can tell that they are only doing this because they had to, and are pouting their way through it. 2

The victims are ordered to stop acting like victims by the firefighters. Near me is one guy who is supposed to be unconscious and needing to be taken via a gurney to the safe zone.  The firefighters bring the gurney over and tell him that this is only a simulation and there is no way they are going to pick him up.  Out of the corner of his conflicted mouth, I hear him say, “but I am unconscious…” They bark a harsh laugh back at him.

It takes two firefighters to pick my ass up and carry me to the safety zone. I scream in pain the whole way.

They mock me the entire time, asking if I am going to milk this all the way to the end.  Luckily none of those words hurt my feelings, because I don’t speak English. In my mind I am a Korean person and I speak only Korean. I am Jin-Soo Kwon from Lost. Their words slip off of me, like water off a Korean duck’s back.

In closing: The firefighters lived up to every negative stereotype and prejudice I harbor against them. They are not heroes, and no, I didn’t forget 9-1-1.

Also: This time the victims won! Here is to the underdog!

Also, too: If you are going to get into a mass plane crash, do not do it in Anchorage, Alaska. 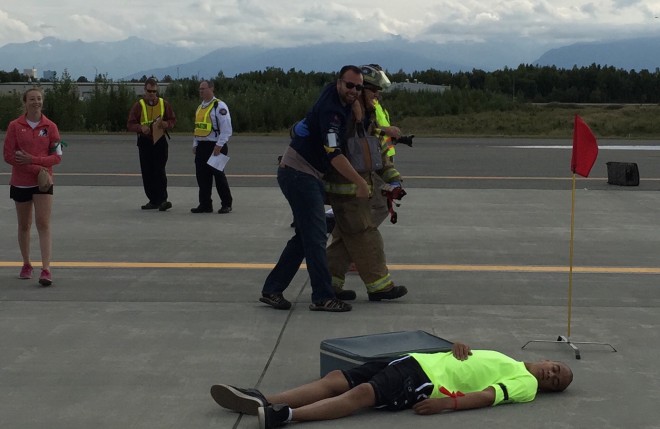 Jay Flewelling is a comedian and an independent film maker. He is a regular cast member of Curious Comedy Theatre and a founding member of the J Names improv group; he also produces the comedy show Friday Night Fights, Recently, his short film won the Best Humor award at Dan Savages’ HUMP! Film Festival. Jay’s work has been featured on NPR’s Live Wire, The Moth, Portland Center Stage, and Mortified.

[Images: Alaskan Airport Crash Simulation, and The Author Tended by a Dick Firefighter. Both images supplied by author.]