The Eagle Has Encountered Customs 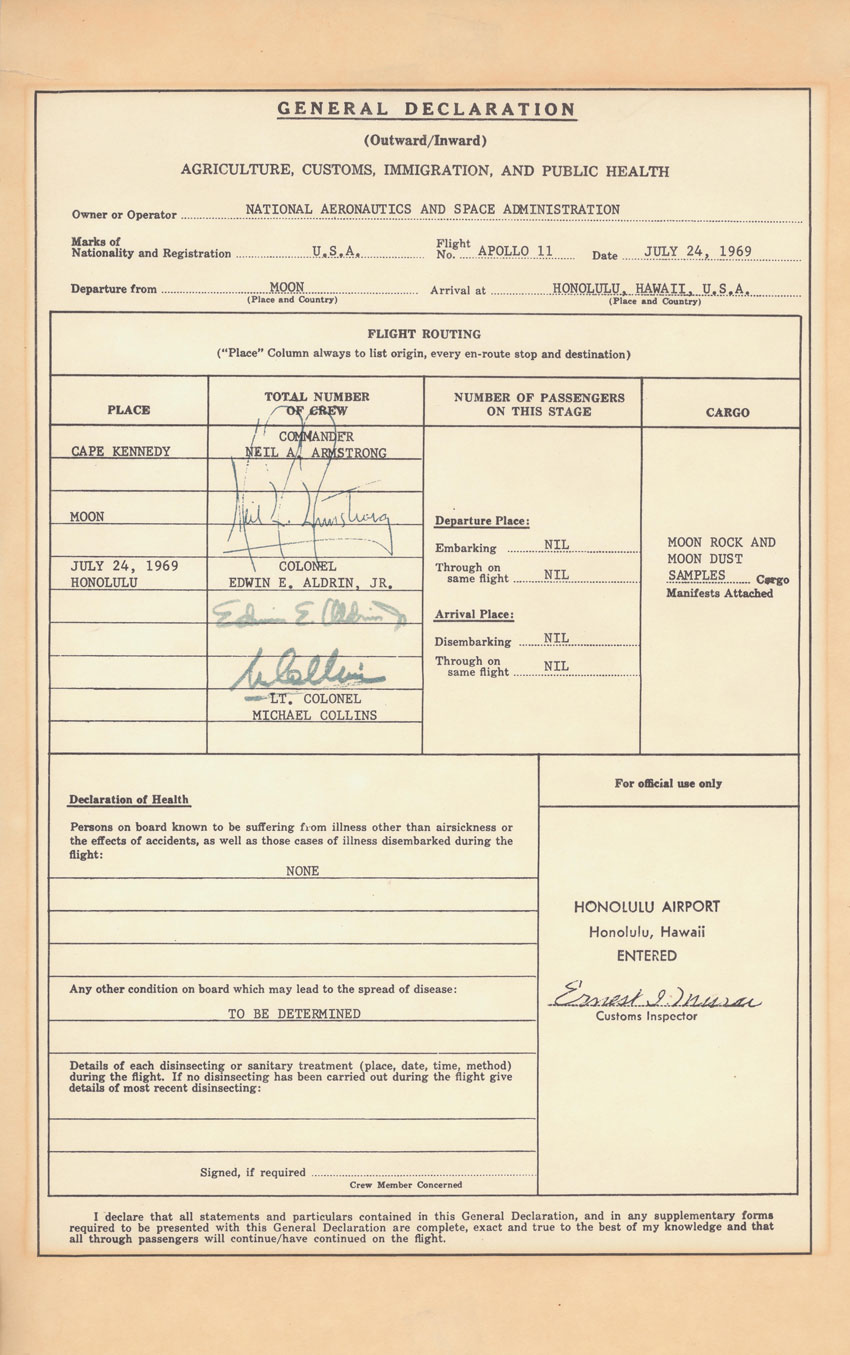 After returning from the very first Moon landing, astronauts Neil Armstrong, Buzz Aldrin and Michael Collins jokingly filled out this customs-and-immigration form. The form was posted on the official website of the United States Border Patrol in 2009, in honor of the 40th anniversary of the Moon landing [Public Domain]

The following story is meant to be humorous, and is not intended to represent the real-life Apollo 11 astronauts. Though they did have to fill out customs declarations, they did not, as far as we know, have a Duty Free catalog in the Command Module.

“Anything to declare?” The sing-song voice of the pimple-faced customs agent fell flat in the long, sterile hallway. A fluorescent light flickered above him.

Neil Armstrong, recently returned to earth, noticed something odd about the agent. He looked around the podium.

“Are you wearing plus fours?” he asked.

Armstrong handed over his declaration card absentmindedly. He has the distinct feeling that this conversion was going to be even more of a hassle.

“Look,” Armstrong said, dryly. “Let’s make this quick. I’ve got a lot of glad-handing and American Hero-ing to do over the next couple of weeks and I need some shut-eye.”

“This shouldn’t take longer than fifteen or twenty minutes,” the agent said.

Armstrong calmed himself with a deep breath. The man who landed in the Sea of Tranquility with less than twenty-five seconds of fuel remaining would not be foiled by a flunky.

“Rocks and moondust,” he said gruffly.

Armstrong steadied his eyes on the agent with a raised eyebrow.

“We can’t just leave the line blank, you know?”

“Look, this is literally the only moon dust on Earth,” Armstrong said.

The agent fell back, folding his arms.

Neil grunted. This was absurd.

The agent cleared his throat and turned to the next page of his script.

“Any plants or seeds?” he asked.

“From the moon,” Armstrong said.

“From the moon,” the agent repeated.

Armstrong fixed his steely eyes on the agent, who merely blinked at him.

“Moon currency,” Armstrong said, his eye beginning to twitch. He wondered if he still had his biometric sensors on and, if so, if Houston might swoop into his rescue. He remembered taking them off. “No.”

“Any plants or insects?” the agent chimed.

“Is the manifest notarized?”

“Wait,” Armstrong was taken aback. “They let you be a notary?”

The agent stepped back in mock offence.

“Maybe they should have you astronauts take one up next time.”

“I’ll mention it to Deke.” This guy stank of Coastie.

The agent wafted the air in expectation.

“No moon plants or moon insects,” Armstrong said, considering the possibility that he had, perhaps, died on reentry and that this was Hell.

“What?” Armstrong was taken aback. “No.”

“Oh, that was most unwise, sir,” the agent said, clicking his tongue. “To be in a location with a Federal Travel Restriction without—”

“A Federal Travel Restriction. For the moon.”

“Anywho! Without a passport there could be delays were trouble to arise and you found yourself in need of shelter in an Embassy or Consulate.”

“—on the moon. Look, hombre, I just spent a little over a week in a tin can the size of a Buick with two other guys on a mission to land on the moon.”

“And did you,” the agent said, with renewed interest. “Get out of this ‘Buick’?”

“You been under a rock for the last few weeks, Junior?”

The agent was getting unsettled himself now.

“Did anyone there ask, suggest or otherwise intimate that you should bear luggage for them?”

“You can’t possibly be serious.”

Neil Armstrong and Michael Collins stood before the baggage claim. The conveyor snaked before them, empty. Collins, an experienced Astronaut at the time, piloted the Command Module Columbia.

“An hour, Collins!” Armstrong fumed. “An hour that twerp kept me in customs. We didn’t travel from the Earth to walk about and study the moon just to be interrogated by some dope who passed the civil service exam by the skin of his teeth, did we, Collins?”

“Well,” Collins said, clearing his throat. “Some of us didn’t exactly get to, you know, walk—”

There was an uncomfortable silence.

“Did you bring up a deck of cards like I said?”

“Most of the hearts are behind the instrument panel,” Collins said, with a laugh.

Deke Slayton—Director of Flight Crew Operations; haircut you could set a watch by—strode toward them.

“Deke,” Armstrong said. “Where the Hell is our luggage.”

“Couple pair of underwear and some t-shirts,” Armstrong said.

“I had some dehydrated ice cream to take home to the kids!” Collins chimed in.

“I’ll look into it,” Deke said. “In the meantime, where the hell is Aldrin?”

“Probably stuck with that numbnuts coastie in customs,” Armstrong said with a rueful laugh.

Armstrong raised his eyes to study the lighting.

Just as Deke was about to tear into Armstrong, Buzz Aldrin saved the day by arriving on the scene, flushed and harried.

“That dink in Customs screwed up my Duty Free order,” he said.

“—Duty Free? The hell are you talking about, Buzz?” Armstrong cut in.

“The magazine,” Buzz said. “It was right there in the seatback pocket with the puke bags.”

“Seriously,” Collins said. “It was the only reading material I had when you guys were on the surface. The whiskey prices were out of this world!”

“You know, Collins,” Buzz said. “I am a little bummed I didn’t get the plastic novelty pilot’s wings.”

“Gentleman,” Deke pleaded. “You’re all pilots! You’ve all been to the moon!”

“Or, you know, thereabouts.”

Their luggage came creeping along the conveyor.

“Let’s get out of here,” Armstrong said.

They grabbed the luggage, said their farewells to Deke and promised to meet up with him back in Houston.

The three Astronauts walked down the concourse toward the exit.

“Collins,” Armstrong said. “I recall putting you in charge of ground transportation.”

They turned a corner and there it was, parked outside the double doors: a station wagon with wooden side panels, bright cherry red and gleaming in the sun.

“Michael Collins,” Armstrong said with barely suppressed rage. “We went from the Earth to the moon and back and you book us a ‘62 Country Squire to get home in?”

“Dibs on the way-back!” Aldrin shouted, running to the idling station wagon.