An American Exercise In Washing Our Hands of Afghanistan 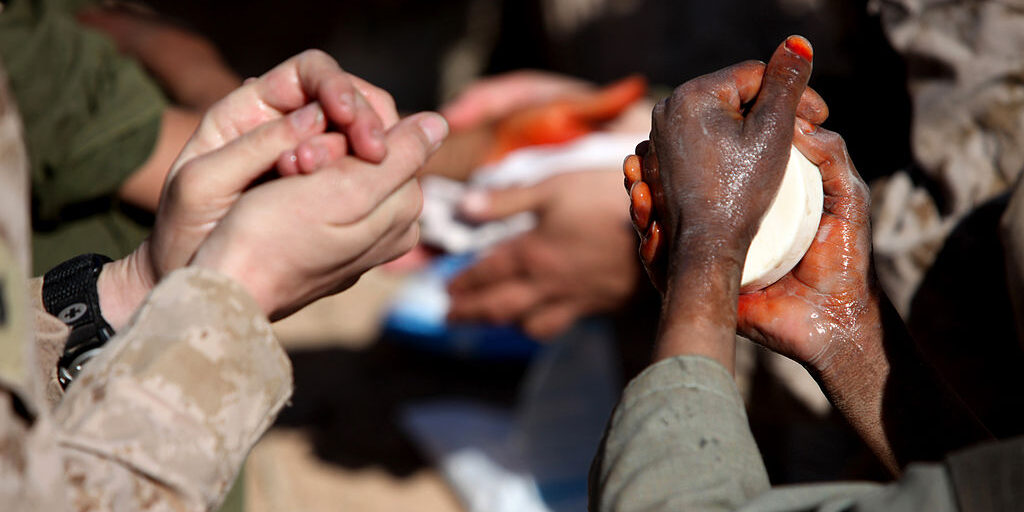 A female U.S. Marine, left, who is assigned to the female engagement team teaches an Afghan child to wash his hands during a hygiene class for the children at a village medical outreach in Boldak, Afghanistan, Nov. 22, 2010. Photo by Lance Cpl. Marionne T. Mangrum, Public domain, via Wikimedia Commons

With the last American troops, but not all Americans, out of Afghanistan most Americans can now go back to their default positions on Afghanistan that preceded the Taliban taking the country over the last few weeks: indifference.

There are lots of words flying around about America’s 20 years encamped at the crossroads of Central and South Asia, but the actions during that period of time speak far louder. From the deal struck between then-President Trump’s administration and the Taliban in February 2020 until that bomb went off at the Abbey Gate last week, America had not had a casualty in Afghanistan. The Taliban keeping their powder dry with a firm date of US withdraw combined with the lack of bleed for our news networks to lead with meant media coverage, and by extension America’s attention, waned. And the numbers — or actions and words, if you will — as covered here by Responsible Statecraft, prove it:

Out of a combined 14,000-plus minutes of the national evening news broadcast on CBS, ABC, and NBC last year, a grand total of five minutes were devoted to Afghanistan, according to Andrew Tyndall, editor of the authoritative Tyndall Report, which has monitored and coded the networks’ nightly news each weekday since 1988.

Those five minutes, which covered the February 2020 Doha agreement between the United States and the Taliban, marked a 19-year low for Afghanistan coverage on the three networks’ newscasts. They compared to a high of 940 minutes the networks devoted to Afghanistan in 2001, all of it following 9/11 and the subsequent U.S. intervention…While the pathetic amount of coverage of the conflict last year can be partially explained by the virtually total dominance of the news agenda by the COVID-19 pandemic, the three networks devoted a total of only 362 minutes to Afghanistan in the preceding five years, or just two hours of coverage per network, or an average of only 24 minutes per network per year.

“The network nightly newscasts have not been on a war footing in their coverage of Afghanistan since 2014,” Tyndall wrote on his blog Thursday, referring to the last year of the surge of troops initiated by Obama in his first term). “For the last seven years they have treated the role of the military there as an afterthought, essentially a routine exercise in training and support, generating little excitement, no noticeable jeopardy and few headlines.”

If World War I was the Great War, and World War II the Greatest Generation, Korea the Forgotten War, and Vietnam America’s first lost war, Afghanistan has been treated by the American consciousness like something of a potted plant: Occasionally watered and tended too, sometimes earning passing glances, mostly ignored unless something hits it hard enough to make a mess needing cleaned up. With only one percent of the population of the United States on active military duty at any given time, and only ten percent of the population having a direct link to that military, the longest American war was borne by an easy-to-ignore fraction of Americans. Those one and ten percent, respectively, aren’t good demos for the networks to target, you understand. Neither are the veterans. Although it takes the largest integrated medical system in America to care for that fraction for decades after their years of service are done, they are still mostly out of sight, out of mind, except as a government budget line item, holidays, and when sports figures need publicly reprimanded on social media.

As for the occasional mess that demands attention, there apparently wasn’t enough of a mess to warrant much attention, according to our media and collective consciousness. The 2400 uniformed US personnel killed and tens of thousands wounded, another 3800 US contractors also killed along with various aid workers, journalists, and civilians in the wrong place at the wrong time ,wasn’t enough. Not to mention 1100-odd allied and NATO members killed, the 66k Afghani military and police killed, and unknown number of Taliban and other fighters killed. But American media and populace can’t even be bothered with domestic casualty stats, let alone “them over there” numbers of people that aren’t “ours”. The bloody Abbey Gate attack that took 13 US military members, wounded dozens of others, killed scores of civilians, and proved to be the last of American’s flag draped transfer cases from over there broke through the media din for a moment. The worst day for the US military in a decade, and worst non-aircraft downing casualty day of the Afghanistan War, made a good three- or four-day news cycle run, impressive for these modern times. The notion that because they are the last casualties it also means the socio-political discussion will no longer need to use them to further agendas and narratives is something folks with integrity would soul search about.

Our elected leaders aren’t much better. President Biden is the fourth president to preside over America’s war in Afghanistan, two Commanders-in-Chief a piece for each political party. He will get the credit and blame for ending the war as the postmortems on the last few weeks are written and debated by the few voices that care about such things. The Biden Administration will point at the Trump Administration for setting them up for any failures that occurred. The Trump camp will point to the Biden Administration that followed them for making a hash of it while also blaming the Obama Administration that preceded them. Which sets up the Obama alums to point to the Bush Administration that got us there in the first place while blaming the Trump team for dropping the ball, and on, and on, and on it goes.

Our congress has stats as well, plus actions and words over the last 20 years. From the AP:

Number of times U.S. lawmakers have voted to declare war in Afghanistan: 0.

Number of times lawmakers in same subcommittee have mentioned costs of Afghanistan and Iraq wars, through mid-summer 2021: 5.

Number of times lawmakers on Senate Finance Committee have mentioned costs of Afghanistan and Iraq wars since Sept. 11, 2001, through mid-summer 2021: 1.

You would think America’s most expensive and longest war would merit at least a little bit of discussion in a congress that constantly beats its chest about constitutionally designated oversight authority and power of the purse, but apparently, they were busy. For twenty years.

The actions, not the words, of the last twenty years, amplified by the events of the last few weeks, speak volumes. But like that potted plant, like the knowledge held in a row of books on a neglected shelf, what is being spoken will largely be ignored. Walked past with a sideways glance and a thought that yeah, there is probably something to learn there, but we have other places to go and things to do. Besides, that information is all nice and neat and contained on that shelf right where it is, out of the way, not bothering anybody. Now that it is done, our leaders, and media, and the discourse will rapidly move on to something else. The military retreated, America’s policy failed, the people involved will have to live with it and that’s a darn shame. But to most Americans, they get what they really wanted: to wash their hands of it. To be done with it. Just make it end and go away, our actions say, while the right words about “sacred obligations” and “America’s role” roll off our lips and scroll down our screens.

It is a joke to think there will be any accountability coming. Hell, America’s so privileged right now we are about to collectively pretend, or at least rationalize, a twenty year war never happened at all just so our government, media, and citizens don’t have confront their own roles in the debacle. Decades of unaccountable government is what incubated the environment to allow the systemic American failure that cascaded into Afghanistan and had to be airlifted out of Kabul in the first place.

That’s too heavy a topic for the American socio-political discourse in the Year of Our Lord 2021, though. We so desperately want to get back to our politics and culture as spectator sport where the consequences are practically nothing and the emotional highs are invigorating. But thankfully for the folks that don’t want to talk about it anymore, the last C-17 has left Kabul so that the linear thinking narrative hounds have their optically clear ending to segue back to the usually search engine optimized topics and feel they duly covered it. The last American military death, for now, is logged in the stats. The media coverage will swiftly move to the next thing. The social media debates will trend back to what we want to talk about, as opposed to what we must talk about.

We washed our hands of it. Just don’t kid yourself they are clean.