Whereas It is Fitting: Veterans Day in America 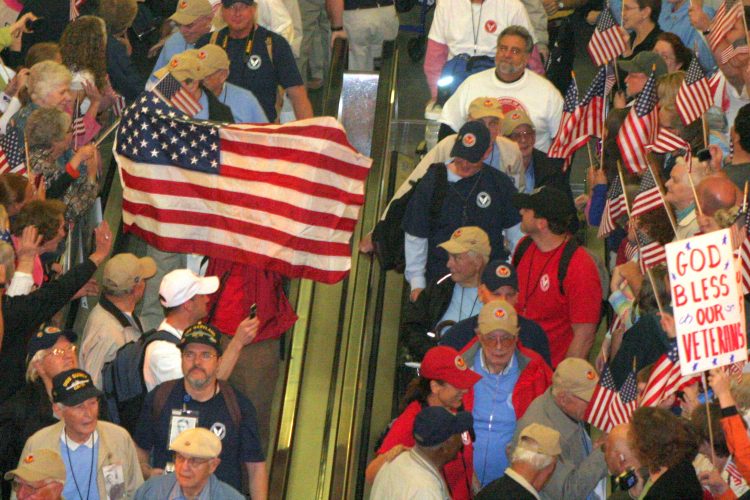 Flight of Honor participants in Raleigh, NC are welcomed back by crowds. Photo by Rtphokie via Wikimedia Commons

Veterans Day as we know it came into being when Congress passed the following into law in 1926:

Whereas the 11th of November 1918, marked the cessation of the most destructive, sanguinary, and far reaching war in human annals and the resumption by the people of the United States of peaceful relations with other nations, which we hope may never again be severed, and

Whereas it is fitting that the recurring anniversary of this date should be commemorated with thanksgiving and prayer and exercises designed to perpetuate peace through good will and mutual understanding between nations; and

Whereas the legislatures of twenty-seven of our States have already declared November 11 to be a legal holiday: Therefore be it Resolved by the Senate (the House of Representatives concurring), that the President of the United States is requested to issue a proclamation calling upon the officials to display the flag of the United States on all Government buildings on November 11 and inviting the people of the United States to observe the day in schools and churches, or other suitable places, with appropriate ceremonies of friendly relations with all other peoples.

“Armistice Day” would be replaced with “Veteran’s Day” in 1938, and President Eisenhower signed into law that November 11th would henceforth be Veterans Day in America in 1954. Ever since, with a few alterations, it has been a national holiday and a day of remembering, honoring, and thanking the millions of veterans our country has.

Or at least, that is what is should be.

Armistice Day was envisioned not just to remember the troops but to harbor the idea of world peace and prevention of such a war occuring again. The brutality of The Great War, as they called it, was dubbed “the war to end all wars” and reflecting on it would surely bring the understand to never want something so horrible to ever happen again. We, of course, know it as World War I, and with the benefit of historical hindsight know that the seeds for an ever larger, more destructive conflict had already been planted and were well germinated by the time holidays were enacted. The generation who had lost so many of their own in World War I could not have conceived the next generation would be witness to a greater cataclysm that would lead many to consider their Great War the more forgotten of the two.

By the time President Eisenhower, one of the architects of Allied victory in World War 2, signed Veterans Day into law in 1954 there had already been another war — this time in Korea — and another generation of veterans that overlapped with the Greatest Generation. 16 million served during World War 2, 6 million in Korea, and 9 million were on active duty during the Vietnam era. With American’s war in Afghanistan now old enough to vote, the post-9/11 generation of veterans will soon give way to the next, and whatever conflicts and challenges the world throws at them.

We should be circumspect as to what those challenges could be. We, having the benefit of history at our fingertips, should follow the example of those who founded this holiday of reflection but also learn from them; They did not know what was to come, and neither do we. They could not envision a Hitler, already living among them as they endeavoured to prevent all further war, rising from the lowest of ranks of WW1 veterans to enslave Europe, massacre the Jews, and threaten the world in a way few ever had. Few of that generation who put down the Nazi threat could have foresaw the far-reaching consequences of the victorious and one-time allies turned Cold War adversaries and how that would shape the world that followed. The cold warriors would marvel that the Berlin Wall has been down now longer than it was up, yet despite that victory for freedom the world is as much on the brink of chaos as it ever was.

It is well and good to long for peace, to decry the horrors of war, condemn and recoil at the ability of humans to destroy each other. At the same time we should understand that in our imperfect and fallen world such things will come whether we wish them or not. Evil and wickedness are well incubated in the hearts of the unworthy men Roosevelt spoke of at the end of his D-Day prayer to the nation as the Greatest Generation were still gathering their wounded and dead on the beaches of Normandy. The lasting peace he prayed for that day, and all the people of the world hope for throughout history, always seems within reach, only to disappear in the latest conflict or machination of some tyrant somewhere. Then that generation rises up, faces that challenge with the hope that it will be the last time, that their sacrifice will mean their children will not have to do the same, and thus it would be worth it.

But that isn’t how it works. The veterans who are to be thanked and recognized on this day of remembrance served knowing the good and the bad of our imperfect history, knowing what those who went before did, knowing there will be others after them. Knowing they are not on a pedestal of history but living links in a chain that stretches back to before we even had a country, and would not have one without such service. Knowing that if not for them, there may well not be any other to serve in their place. While the historians and politicos can argue the good and the bad of various policies and occurrences, those debates only happen at all because of the freedom those who served to maintain provided the country in the first place.

Veterans Day should be observed with cleared-eyed understanding of what has been, will be, and currently is occurring. Time does not stop, nor does human nature change. As long as this great experiment in a free people self governing is to continue, it is good and proper to reflect on those Americans who carried the load when it mattered the most and those actively doing so, and to prepare the next generation for when it will be their turn. Which will happen, like it did for the last generation, all too soon.