I have a Saturday Night Gaming Group. We get together every other Saturday and share a meal and play a game and say “holy cow, is it 9:30 already?”

The current situation makes that difficult. So we’re figuring out workarounds. Discord allows for voice chat for a group of people. So if your D&D game has more “Theater Of The Mind” going on than “moving pieces around on a map” going on, you can talk your way through your game. (I’ve found that while I don’t really miss counting the squares on a map to see whether or not I can hit a goblin archer next turn, I do very much miss having a map that can tell me where I am, more or less, in the building that contains said goblin archers. So we’re working on ways to distribute a map that doesn’t give away rooms that we haven’t been in yet (or hidden doors or stuff like that).

I don’t want to be limited to Theater Of The Mind D&D, though. I mean, I love playing D&D (and Fate and Heroes) with my gaming group, but I also really like playing board games. So I figured I’d take one for the team and get Tabletop Simulator and test it for the group.

So if you wrap your head around that, you’ll be able to dig what it actually is. This is a way for you and your friends to play more or less any board game in existence. Does it involve cards? You can shuffle the cards and deal them out. Does it involve dice? You can roll the dice. Are you limited to 6-sided dice? No! You can have 20 siders! 10 siders! 4 siders! Flip a coin!

But YOU have to do that. Here, lemme show you some of what I’m talking about. Here’s their version of “Reversi” (Othello, as I know it). 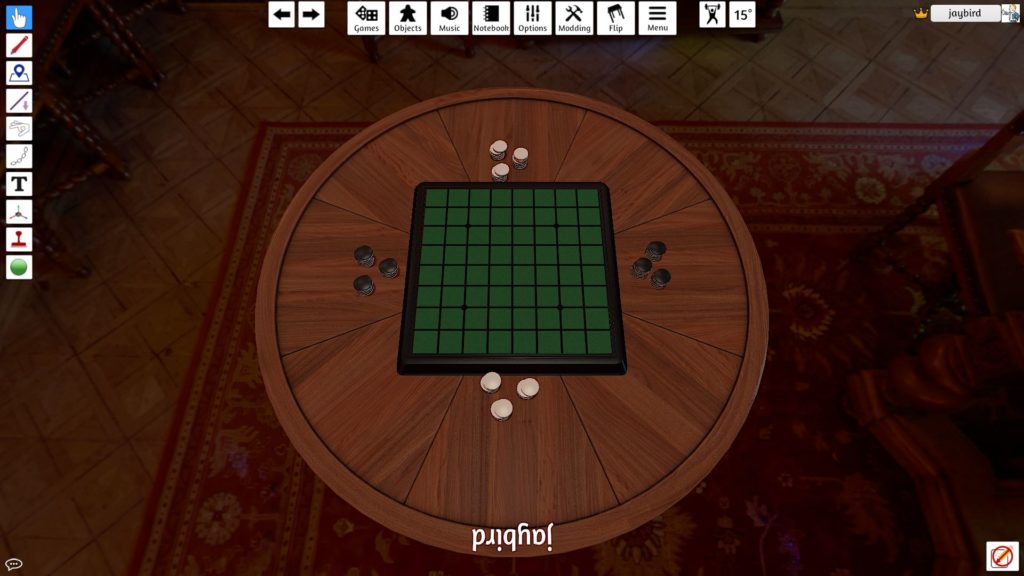 There. that’s how they set it up for you. They don’t put the four pieces in the middle for you. You have to put those there yourself. What the sim does do is make sure that you can’t mess up and put a piece on one of the “illegal” places. So if you want to drop a piece on one of the lines? You can’t. Other than that, you can put the pieces wherever you want. There is no AI. The game won’t tell you that you can’t put a piece there. So if you want to pick up one of the white pieces and drop it on the board? You can. 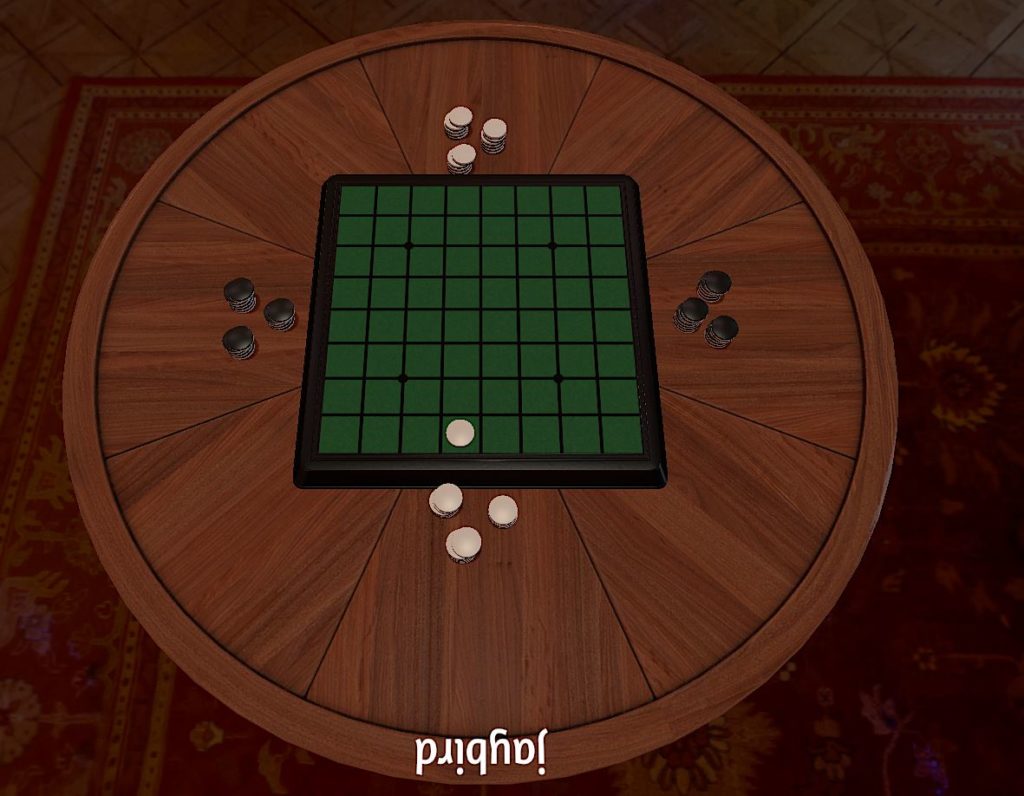 So let’s set up the game for real. Here. Starting position. I’ll go first. I’ll pick up one of my pieces and drop it on the board. 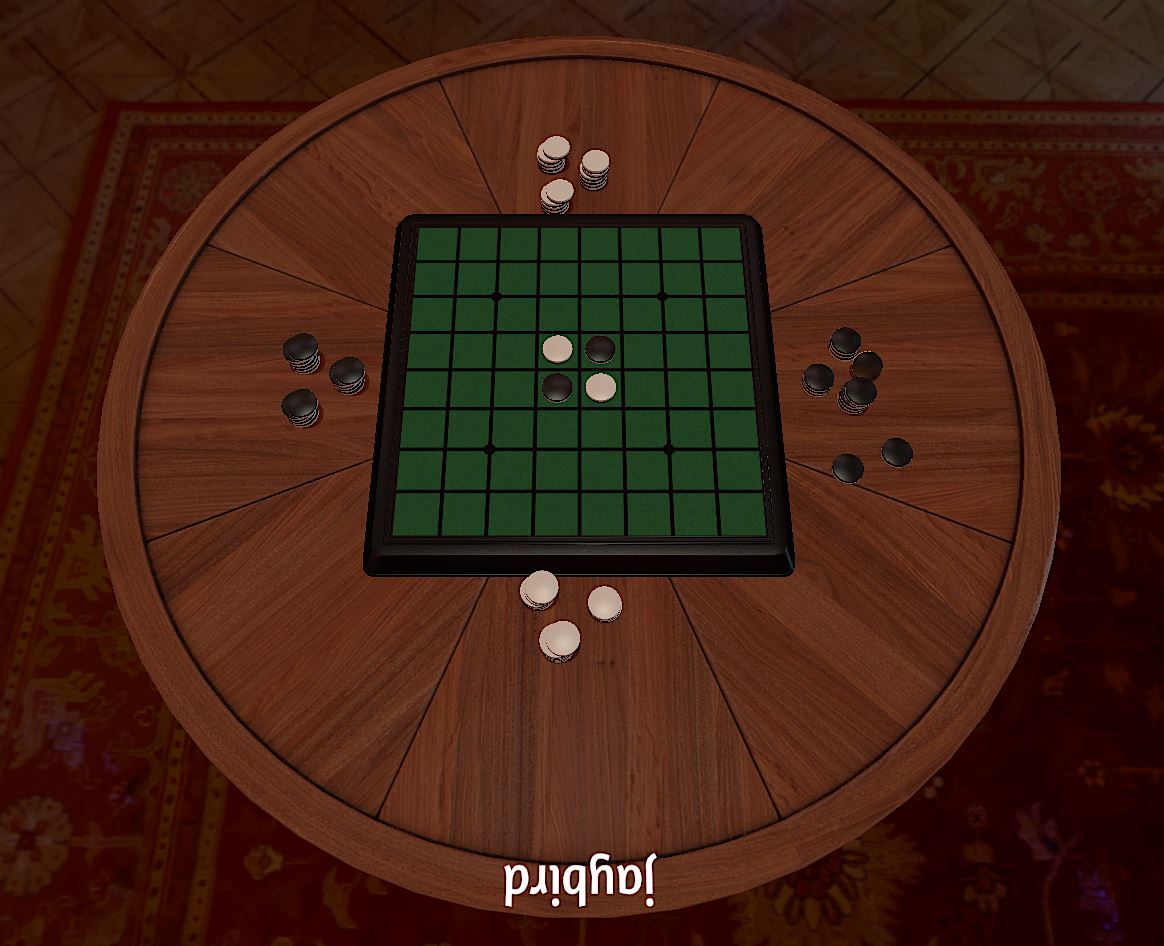 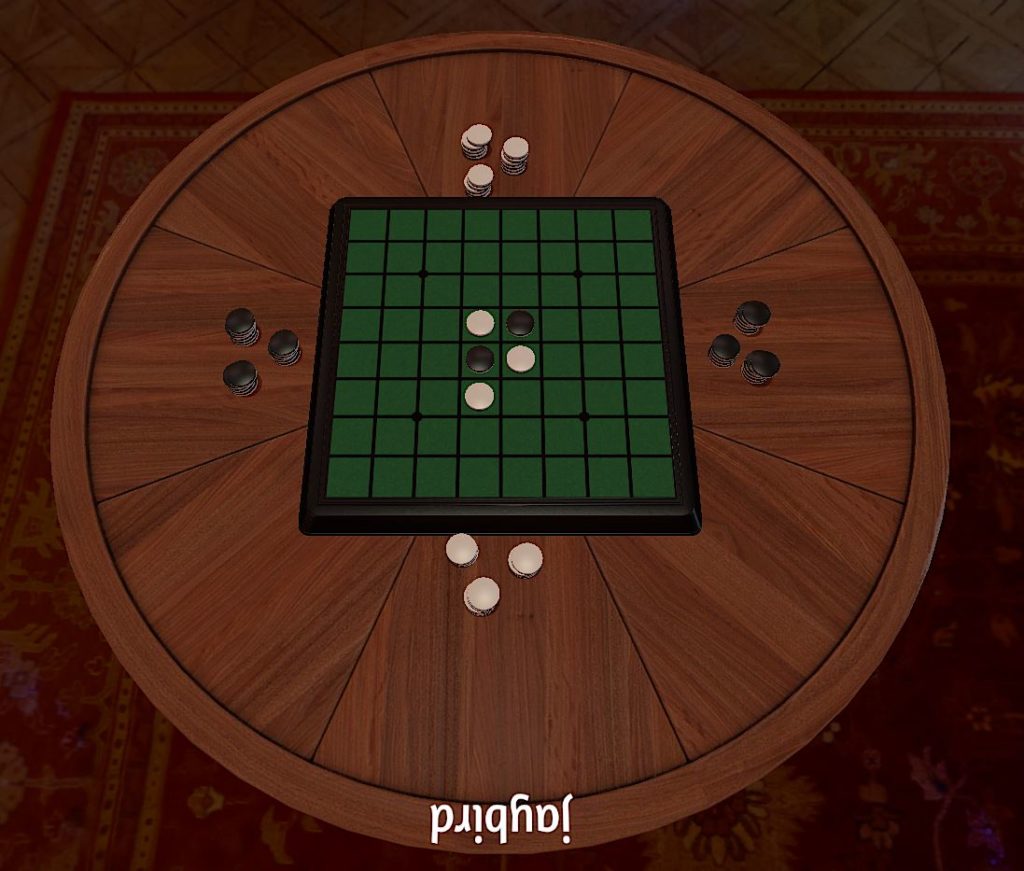 There. You’ll notice that the board doesn’t do anything. Why? Because there is no AI. The game doesn’t know that the “rule” is to flip that black piece there. I have to do that myself by clicking on the piece and pressing “F” and dropping it again. You know. Just like when you sit down at the table with the board and the pieces in real life. 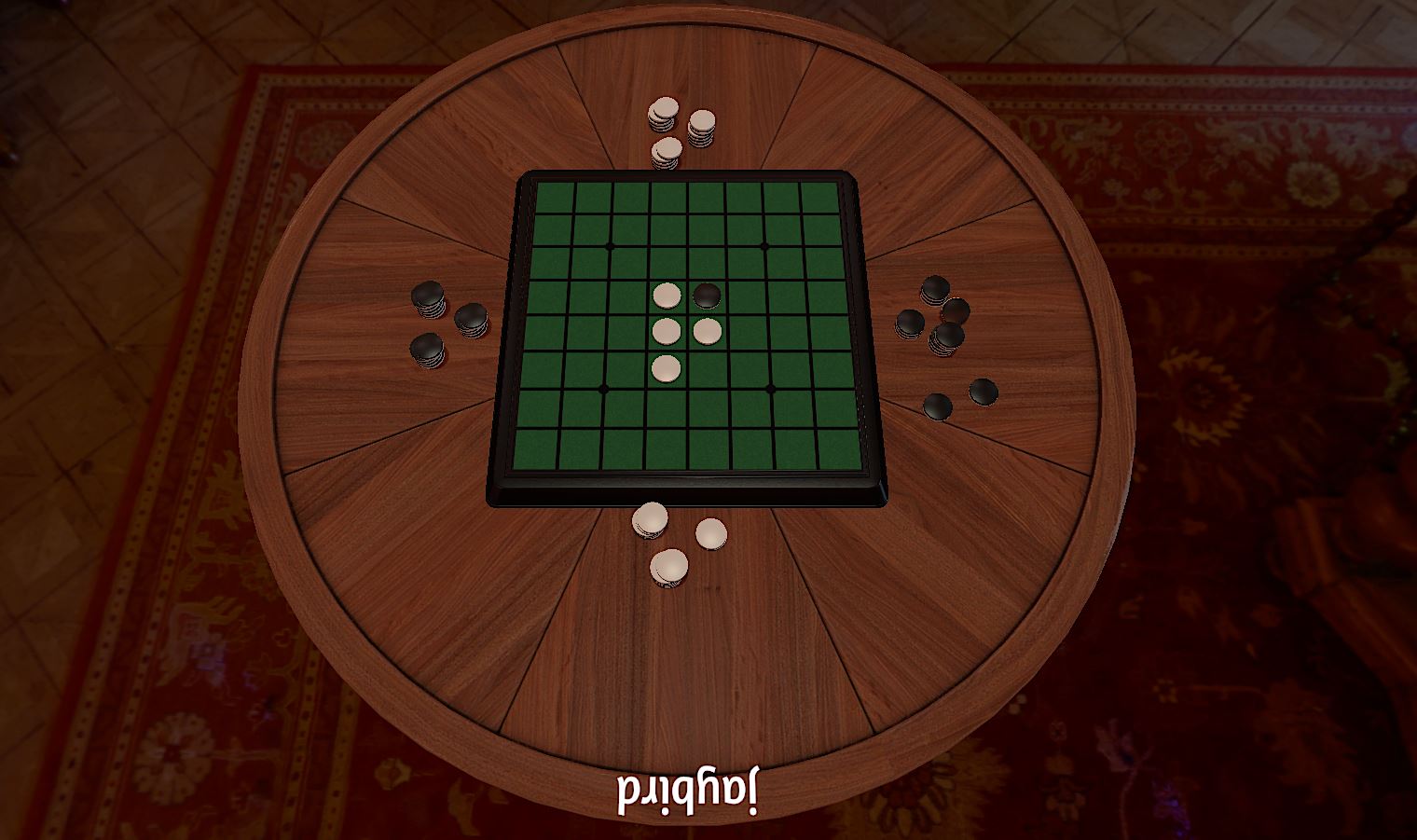 So what does the game come with? Everything you see here: 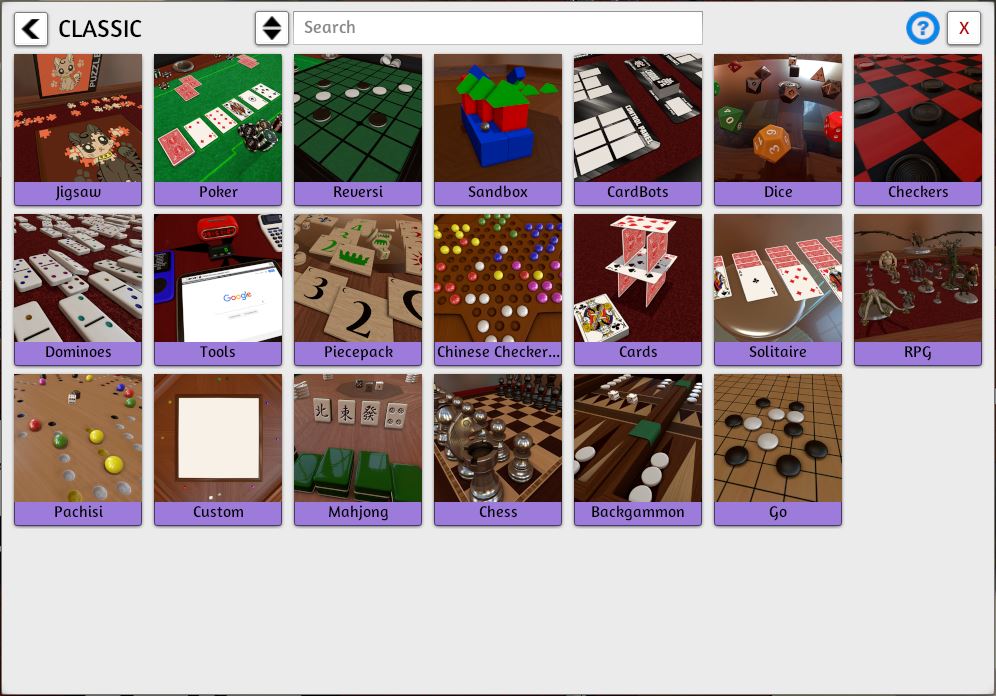 If you want to play with a deck of cards? That’s an option.

If you want to play with a jigsaw puzzle of a picture you happen to have on your hard drive, you can do that. 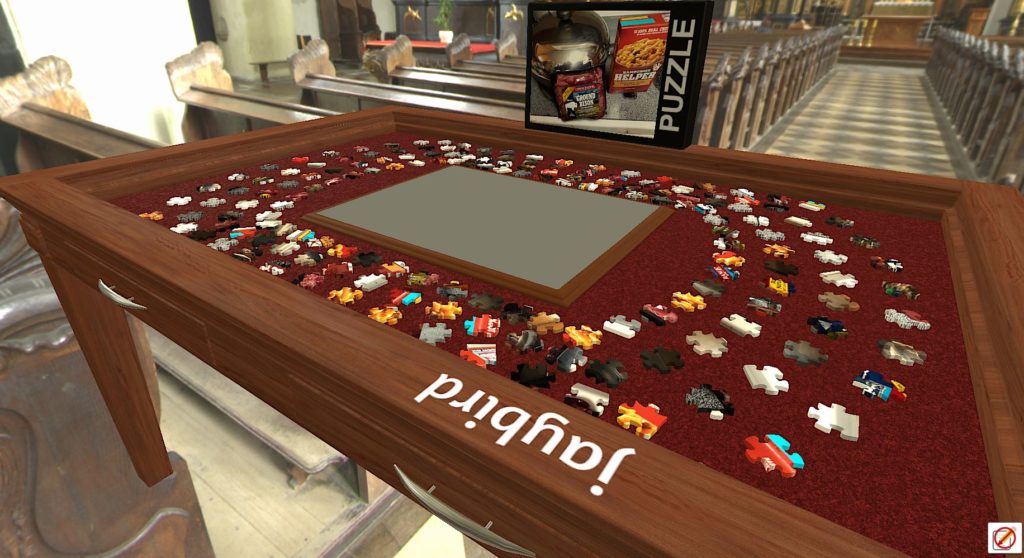 If you want to play D&D, you can do that too. 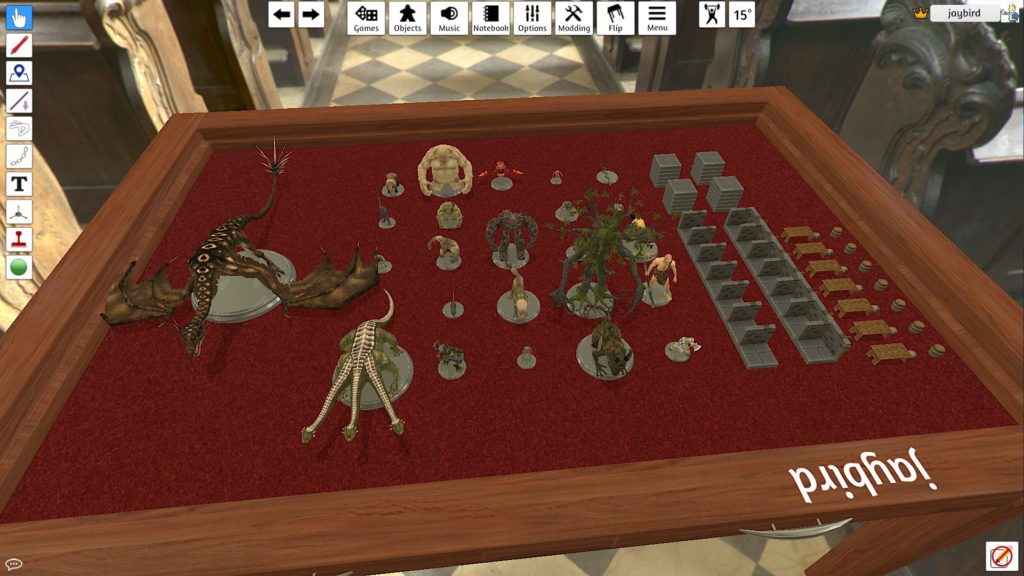 The only issue, and I’m going to say this again, is that there is no AI. You move these pieces around yourself. (That said, there are some small touches they’ve added. The D&D figurines are a little bit animated. You can make them have an attack animation or a death animation.) 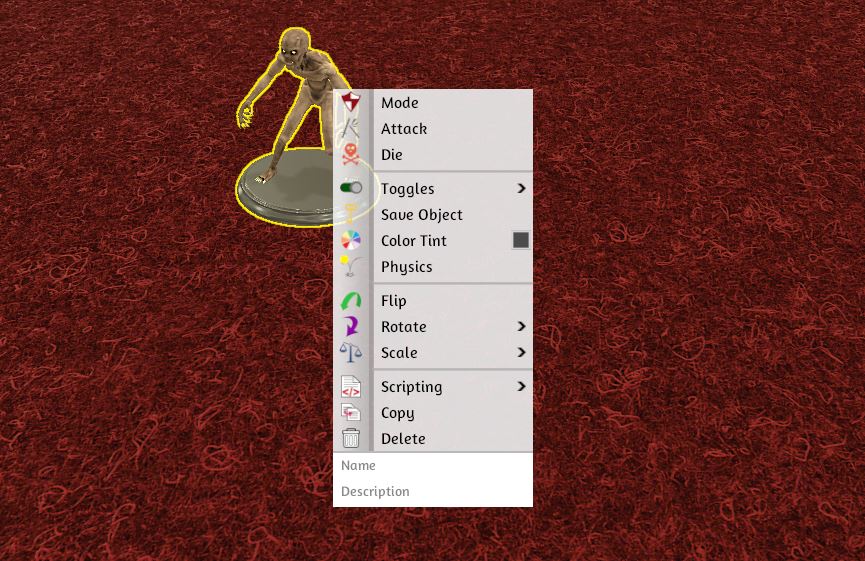 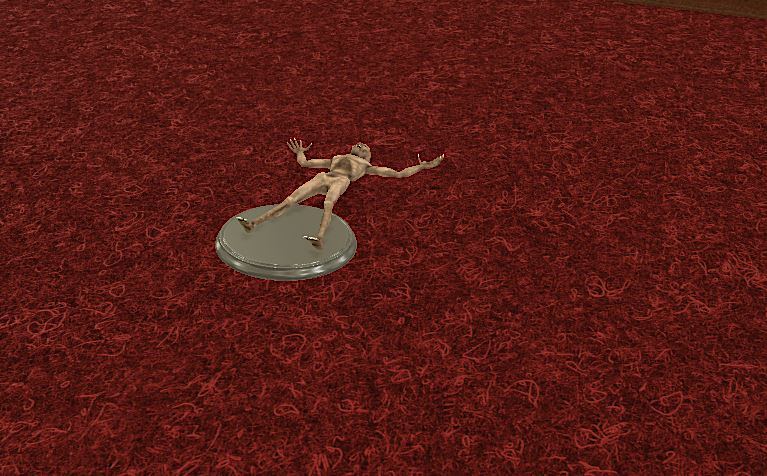 There is also DLC available. There are a number of board games available for purchase (most of them between five and ten bucks) and you can play stuff like Zombicide or Cosmic Encounter or… well, a lot of board games are available.

All in all, this tool is exceptionally powerful… but it’s not particularly intuitive (I’ve had to use a number of tutorials so far). So if you’re going to get this for your gaming group, just know that, much like with any new game, you’re going to need a guy on the team who is willing to sit down and figure out how to play it before you can really get down and play the game.

But if you have that guy on your team? This’ll be AWESOME.

(All screenshots taken by the author.)