Along Colorado’s Front Range, bicycling’s status falls somewhere between cult and minor religion. The Bicycle God is a demanding sort. Not only are adherents supposed to spend extravagantly on idols representing the unobtainable perfection of the ultimate bike — it’s not particularly unusual for the $500 car stopped at the traffic light next to you to have a $5,000 bicycle strapped to the roof — but hours spinning the “prayer wheels” are required. Here are snapshots from a recent Tuesday morning spent in service, with comments. 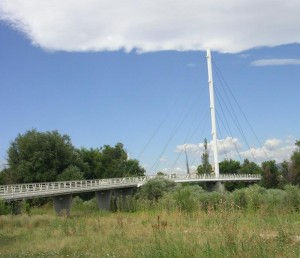 At the urging of the cultists, the western suburbs of Denver have built a very extensive network of bicycle lanes, paved trails, and unpaved trails. Some of that infrastructure is expensive. This 400-foot-long $5M suspension bridge crosses Clear Creek and joins two major pieces of the paved trail network. Historical note: the bridge is built at the confluence of Clear Creek and Ralston Creek, the site of the first gold strike in Colorado in 1850. Not that you could tell unless you already knew — all that’s there is a modest marker and a gravel parking lot, frequented only by bicyclists using it as a starting point. 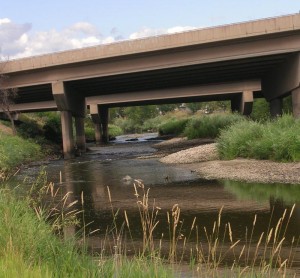 Large stretches of the trail system are de facto wildlife preserves with deer, coyotes, foxes, raccoons, skunks, a wide variety of small rodents, and the occasional beaver, black bear, and mountain lion. Also the occasional fly fisherman: this stretch of Clear Creek supports a reasonable number of small trout if you know where to look for them. Most people passing over the bridges have no idea what’s underneath. I don’t know exactly how long the Clear Creek bicycle trail has been here — parts of it looked old when I moved to Colorado 27 years ago. 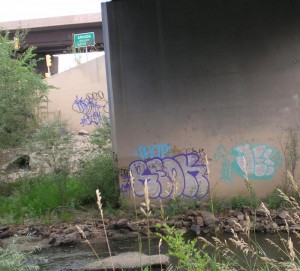 I’ve always been perplexed that so many of the bridge piers are covered in graffiti. Is there some unwritten rule that every vertical concrete surface must carry a message? Seriously, who’s going to wade through parts of an icy-cold stream — largely filtered snow melt except when it rains hard — in order to paint something that only the bicyclists see? While I was stopped to take this snapshot, I flipped the bike upside down to adjust a derailleur that had been giving me trouble. Two different cyclists stopped to ask if I had all the tools I needed to fix my problem. The bicycle cult looks after its own. 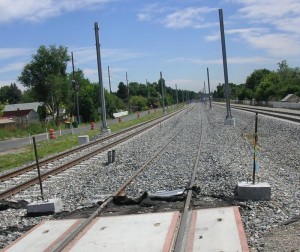 As I mentioned here (probably too) frequently, Denver’s suburbs are building a light rail public transit system. This is part of the line that will open in my suburb sometime next year. Every train is supposed to include space where cultists can stand with their bicycles (the RTD buses are all equipped with bike racks on the front). The two sets of rails to the left will carry passengers; they share right-of-way with the set to the right whose main purpose is to deliver grain and other materials to the Coors brewery several miles farther west. The Clear Creek trail passes that facility, still the largest single-site brewery in the world. I don’t bike out that far very often because, well, old knees and a 30-mile round trip. 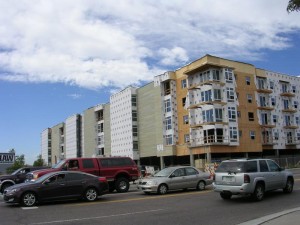 The light rail system is causing substantial changes near the rail stations in the suburbs it reaches. These new luxury apartments are under construction about three blocks from what will be “my” train station. Another 700 or so apartments, condos, and townhouses are already loosely committed for the area within a half-mile of the station, and will displace mostly marginal retail locations. The bicycle cult will no doubt be well represented amongst the new people. I expect to see handlebars peeking over the balcony railings in two out of three of all the apartments once they’re filled.

Image credits, and explanations: All by the author, August 4, 2015, hereby placed in the public domain. You may have asked yourself, “Why is everything leaning to the left?” The view finder in the beat-up little digital camera I carry on the bike is improperly aligned, and I always forget that until I upload the pictures to my Mac. Posted as “private” for the first several hours, so visible only by the editors, while I learned what kinds of HTML the site’s post creation tools would break for some browsers.

The remarks by President Biden calling on congress to enact "commonsense gun law reforms" made news. Read them here for yourself.

Introducing the Republic of Indian Stream