An Evening with Batman and Robin 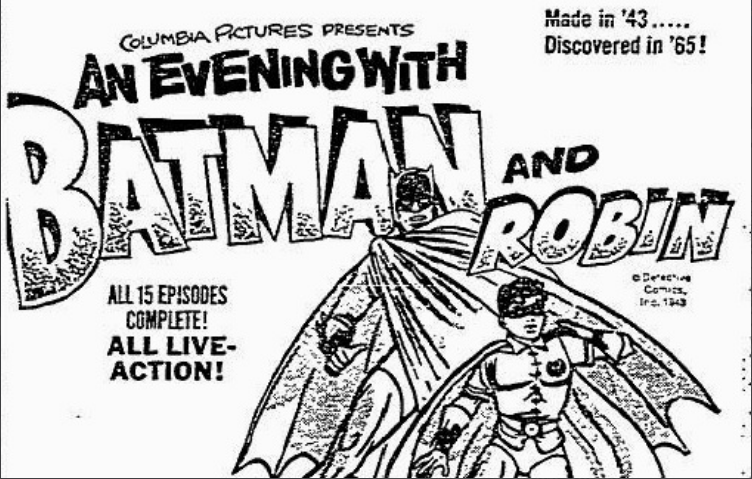 Batman has never been to the Playboy Mansion. Despite what you may have heard.

As legend has it, the idea for the 1966 “Batman” TV show was sprung at a Playboy party—either at Hugh Hefner’s mansion or one of the numerous clubs—where a television executive joined other revelers in watching the 1940s Batman movie serials as a lark. The image of suave, libertine gentlemen and scantily clad Bunnies guffawing at the Caped Crusader and Boy Wonder in between slurps of Manhattans has entered the Batman lore, passed on from comic-con to comic-con.

Except it probably never happened. It’s a myth—but with a grain of truth. And the true story is actually more interesting. Like so many others, Batman went to college in the 60s, and got a little crazy. And then nothing was ever the same. 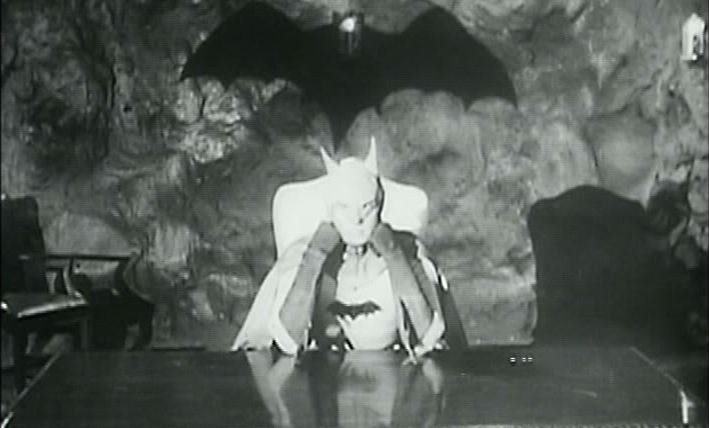 It wasn’t the Playboy Mansion, or the Playboy Club, but the Playboy Theater in Chicago where the 15 chapters of the 1943 serials were played over the summer 1965. Despite the name, the Playboy Theater was an ordinary theater—albeit with adult and offbeat showings—open to anyone willing to purchase a ticket, no passcode or key required. The four-hour show was a surprise hit. Columbia soon began marketing “An Evening With Batman and Robin” in New York, San Francisco, and other arthouse quarters and college towns across the country. According to the ads, it was the “in-tertainment” hit of the year. Folks flocked to repeat viewings, sometimes in costume. College students threw Batman parties. The craze was covered in newspapers coast-to-coast.

Those serials aren’t fondly recalled by present-day Batman fans, if they’re recalled at all. They’re mostly notable for, maybe, introducing the character of Alfred, for featuring the first on-screen Batman, and for the racist wartime depiction of the villainous Japanese “Dr. Daka.” It’s embarrassing to watch today and couldn’t have been all that compelling at the time.

So, as you might expect, fans of the 1965 show weren’t watching the Dark Knight the reverence he normally earns today. Audiences cheered and booed during the shows—not at the right moments, from Batman’s perspective—but mostly they laughed.

“Those ears of his, they’re hysterical,” a theatergoer in Philadelphia told an Associated Press reporter. “And those leotards he wears. There’s a hole in the knee.”

A Clevelander called Batman “the most incompetent hero the films ever saw.” A critic with the Louisville Journal-Courier said the series was “unbelievably bad and unbelievably funny.”

But unlike the cultists who would watch and rewatch “The Room” and “Troll 2” for laughs decades later, these Batfans believed they were experiencing a form of high—if unintentional—art. The show was a “new wave Avant-guard pop art classic,” as New York Times critic Seymour Krim put it.

“It’s actually a commentary on these, our troubled times,” said a Chicago student in the Chicago Tribune. “People in our society have become so alienated. This Batman bag is merely a celluloidic visual manifestation of everything surrounding us. Vietnam. Santo Domingo. High School dropouts. Bull Connor. The New York Water shortage. And, I need to add, the Bomb.”

It was only a year after Susan Sontag had helped to define the concept of bad taste as sophistication in her landmark essay “Notes on Camp.” Campiness is apolitical, Sontag said, a celebration of the artificial over the sincere, style over substance. A subversion of society’s principles and mores by lambasting all principles and mores.

Not that viewers didn’t appreciate the show’s innocence, as well.

“Batman represents a simplified existence. Seeing these films takes us back to simpler times when life was merely a battle between good and evil,” said a University of Pennsylvania student in the AP story. “Everything is much more complex now. But after four hours of Batman serials…you can begin to see things through the eyes of Batman. You’re a changed person, for a while anyways.”

Laughing at Batman was a way to stick it to the reviled system, without needing to advocate a philosophy of your own, while secretly pining for a simpler time when such protests weren’t necessary.

And it was nostalgia entertainment, something we know full well today. Many theatergoers had seen the serials as children and just wanted to experience them again. These new forms of media were allowing viewers to pluck pop culture items out of the past and experience them with unprecedented immediacy. It was the beginning of an age where everything old could be new again, whenever you want and for whatever reason.

It’s fascinating to consider that just over a decade later, the tropes of serials would become dominant in pop culture through Star Wars and Indiana Jones.

Because they happened within months of each other, many naturally assumed that “An Evening with Batman and Robin” led to the ABC show, which premiered in January 1966. But all indications are that there was no connection. The series had been in the works for years. ABC was keen on doing a hero show following James Bond’s success, and nabbed Batman after failing to get Dick Tracy. None of the executives or writers involved in the show have ever mentioned the 1943 serials as inspiration. 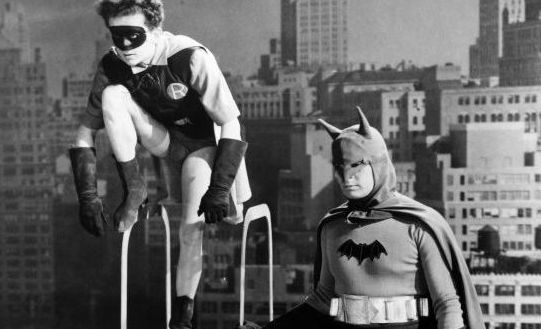 Even if they did, the similarity in tone would have mostly been a coincidence, or maybe a sign of the times. Both producer William Dozier and writer Lorenzo Semple claimed that after reading a sampling of Batman comics, they decided their only option was to do it silly. Neither had ever been comics fans, and they didn’t see any hidden brilliance in between the panels.

Their strategy was to avoid hamming it up with too much winking at the camera or obvious jokes. Semple didn’t really want to do “jokes” at all, but to transcribe the Batman comics so literally and so preposterously seriously that kids would find it enthralling while adults would find it hilarious.

“THE ONLY LEVEL YOU SHOULD WRITE ON IS A GOOD FLAT TABLE!” Semple wrote in one memo.

If Bob Kane was displeased at seeing his beloved creation become an object of mockery, he sure didn’t show it. Especially not in his effusive letters to the studio, where he seemed thrilled that Batman was getting a new spotlight. (He even complained that his screen credit was too small.)

“Although it is not the mysterioso and grim Batman that I have lived with all these years, I realize that your version is an updated ‘camp style’ that is in keeping with today’s T.V. market,” Kane wrote in a letter to Dozier before the show’s premiere.

In the publicity run-up to the release, he even implied this was the idea all along, claiming that Batman’s gadgets “are a marvelous satirical spoof of our so-called mechanized material society.”

Of course, even as the series was a critical and commercial hit, not everyone was as good a sport as Kane. Batman comics writer Chuck Dixon recalled, in Glen Weldon’s “The Caped Crusade,” getting into a fight with a friend in grade school over the show, convinced it was making fun of “his” Batman. He was hardly the only one. So painful was the memory of the Camp Crusader to Batman’s most ardent fans, they threw a fit decades later when Warner Brothers announced that Michael Keaton, then mostly known for “Beetlejuice,” would be donning the cape.

What to make of the camp years today? I appreciate it as a weird and charming part of Batman’s history — but it’s easy enough for me to say that, knowing full well that he’d return to dark gravitas soon enough, and stay there for decades.

But even the dark, serious Batman has a certain ironic, subversive edge to him. Today’s Caped Crusader incorporates all of the eras and variations of his history and then stands aside a bit to smirk at it all. Without that bit of distance and levity the Dark Knight’s weighty, somber tone would probably have sunk him years ago.

Amazon Prime’s hit superhero satire “The Boys” savagely skewers DC archetypes like Superman, Wonder Woman and The Flash, but leaves Batman more or less off the hook — what is there to say about Batman that he hasn’t already said about himself?

The Adam West Batman show makes the most sense to me as part of the wave of anti-authoritarianism that swept the late 60s. In this Gotham the police are all helpless and their savior is a ridiculous pompous bore, while their enemies are a ragtag bunch of clowns impossible to take seriously.

No one seems worthy of control over Gotham, which is something you could have said for that time’s real leaders as well. Given the complicated feelings on authority that the Dark Knight evokes, as a law-enforcing lawbreaker, from this angle the show starts to feel like a more natural part of the Batman lore.

Alex Parker is a policy writer in Washington, D.C. with 15 years of journalism experience.