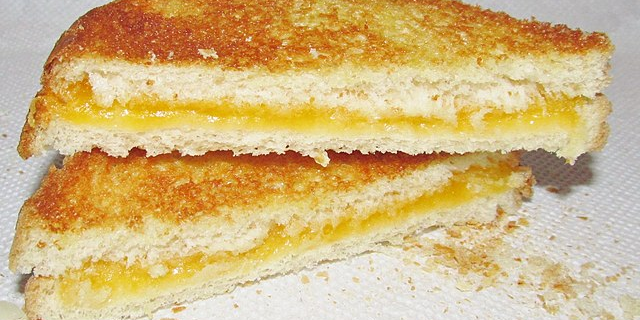 “The past few years have been brutal and full of chaos,” begins an article I recently read. The article was about making a grilled cheese sandwich.

Ennui rules us. What laden and barren times we live in. I recognize the tribulations of the pandemic fear and the mongering that followed but that has consequences for the complex things in life. The simple remains the simple. This was about pressing a button to heat a buttered and cheese filled sandwich.

The author didn’t even use a pan. She used the modern convenience popular among the denizens of our brutal and chaotic times called an air fryer. To be fair there is the added culinary instruction to flip it at the half-cooked mark which makes no sense in an oven designed to circulate heat.

I wrote a recipe for a grilled cheese sandwich. The year was 2014. ISIS had been dubbed the JV team by our president despite obvious provocations and burnt corpses. Michael Brown made the news. We were told not to worry about ebola. The Crimea went to Putin’s criminal state. My health insurance costs tripled as I kept my doctor but had to jettison my health plan. Auburn damn near won the national championship. We gave up five terrorists in exchange for a deserter.

The year before our government defended extrajudicially killing sixteen-year-old citizens via drones, we got evidence of what we already knew regarding the NSA spying on us, a chick in sneakers told us over the course of eleven hours that we needed to stop talking and do what she wanted regarding abortion. We learned about purple drank (some of us already knew,) and Anthony Wiener defied satire.

How much of this made it into my grilled cheese recipe article?

None. Not a bit, because mine was an article about a damn grilled cheese sandwich.

I’m not averse to tangential writing. In fact, I love it. Watching someone hop around subjects while holding a string is a wonderful thing to behold. I’ve had success doing it. I’ve had failure doing it. But it’s a fun and entertaining way to approach an essay.

In 2014 I started writing for a sports site about tailgating food, a position I held until last November. I knew from the beginning that very few people came to a site specializing in covering Crimson Tide sports to learn how to make a bechamel, so I went off on tangents like a mad beast. The first four to six hundred words of each article were a hopefully humorous hook meant to draw in readers. It was a slow build, but it worked. I wrote about Vaclav Havel as relating to cupcake games, Ricky Gervais, I think I included the time Bea Arthur grabbed my ass but I can’t find it immediately, and crazy Irish bus drivers trying to kill me on The Ring of Kerry. It was kind of insane and I was given a lot of leeway, but it worked.

I’m not against tangents in writing as long as they get fleshed out and tied into the thrust. I like quick funny throw-away lines so as long as they hold even a tenuous relationship to the subject matter. They can be but needn’t be topical. I’m sure I threw an Weiner joke out there but I didn’t throw doom and gloom around as filler.

Ancient Greece was pretty illiterate. Brilliant strides were made in the arts, but few could read. There was a scene in Cinema Paradiso where one man sat in the middle of a café and read the paper to an assembly of non-readers. I imagine that that was what a neighborhood square was like a few thousand and change ago in Greece when a Homeric bard passed though. The Iliad and the Odyssey and doubtless other epic poems by lost authors were recited without a written script by the bards who memorized the poems and spent hours entertaining the assembled.

The bards had several pat phrases that could be introduced at various places in the text if they had a lapse of memory and needed a second to recall what comes next. The phrases didn’t move the story forward but they didn’t interrupt either. They gave a moment for the bard to collect himself.

One of those phrases was “Polymetis Odysseus,” meaning clever minded or multitalented Odysseus. Different bards had different lines that they might use with polymetis to buy time and the phrase is one of hundreds, surely, used variously by wells or in agoras.

When I read phrases like “The past few years have been brutal and full of chaos,” pressed into service in an article about a cheese sandwich I think “Polymetis Odysseus.” The author is filling space with a much used cliché and daring people like me to say “Oh, Please.”

I see this as an offshoot of an oddity in our cultural ethos. Achievements are not good enough unless the achiever or achievers were, at least briefly, an underdog. You don’t see many anniversary announcements without a variation of “we made it through some tough times.” Take the word “adversity” away from sports commenters (do not get me started on the silliness of the word “commentator”- you think I’m a curmudgeon now,) and you will get airwave silence. The Olympics are a soap opera.

Empathy is a binder. So is suffering. We’ve been told over the past two years that “We’re all in this together,” as we are told to stay apart.

I’m sure I have been guilty of using such phrases and likely will at some point in the future, but deployment should be relative to circumstance. A damn grilled cheese sandwich cooked in an air fryer?