Sunday Morning! The Man Who Lived Underground by Richard Wright 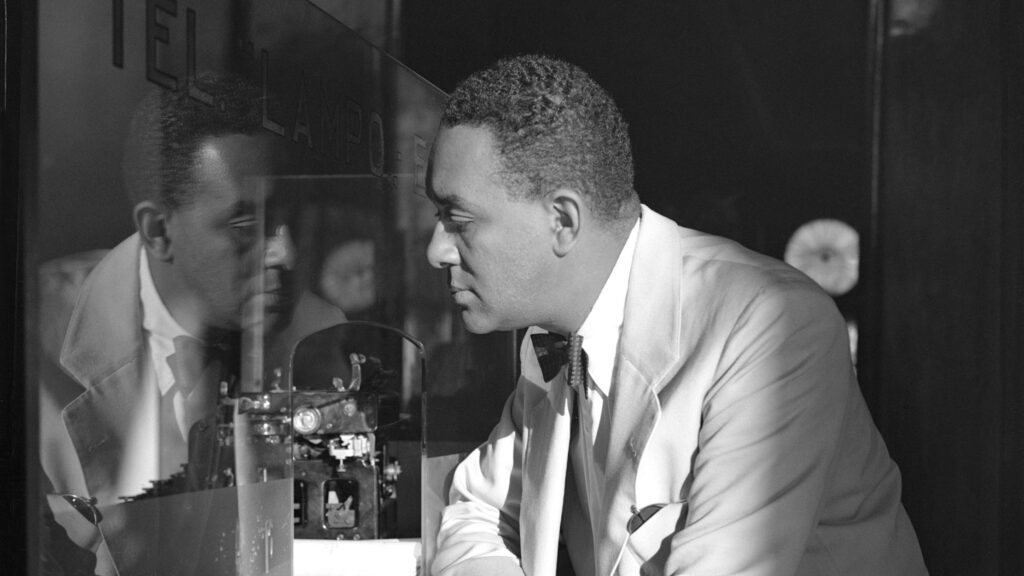 It is the classic nightmare story: accused of a crime you didn’t commit, snatched off the street by the police, tortured, beaten, and coerced: All you have to do is sign this piece of paper and you can go home. All of this will be over. Look, we know you’re guilty, or we wouldn’t have pulled you off the street in the first place. After hours and hours of this, you start to think Maybe they’re right. Maybe I am guilty. Maybe we all are.

It’s the stuff of nightmares and life in totalitarian countries. It’s also the fate of Fred Daniels, the main character in Richard Wright’s just-published novel, The Man Who Lived Underground, a laboring Black man in a nameless American city who is stopped by the police on his walk home from work on the second page and pulled in for questioning. He works for a white woman, next door to a white couple who have been murdered; the police need a culprit and they’ve chosen Fred. The next fifty pages move at the speed of a plunge off a tall building. Being a Black man in Jim Crow America was not really so different from living in a totalitarian country or waking nightmare after all.

And, in one sense, the novel was quickly memory-holed- not unlike its hero. Richard Wright wrote the book between 1941 and 1942, after the success of his novel Native Son and before Black Boy; his publishers were looking for another hit, but were put off by the “unbearable” early scenes of police brutality and rejected it. Readers might be more ready to accept these scenes today, when we’ve seen too many cell phone videos of worse brutality, than they were in the years of the Second World War; if anything, for moderns, it’s probably a shock that Daniels isn’t dead by page three.

Instead, he signs the “confession” that he’s too broken to read and is taken for one last visit to his pregnant wife Rachel, who somewhat improbably goes into labor once he arrives, necessitating a police escort to the hospital- where Fred escapes in a driving rainstorm, fleeing down a manhole and into the sewers. He will spend most of the story here, under the white world, but not of that world, observing from betwixt and between, like Welles’s “Invisible Man” or Ralph Ellison’s, who also hid in an underground room, living off stolen power, and both of them spiritual kin to Dostoyevsky’s Underground man. Of course, going underground has a different, deeper meaning in the Black American experience. This underground railroad might mean freedom, removal, or banishment; life or death. 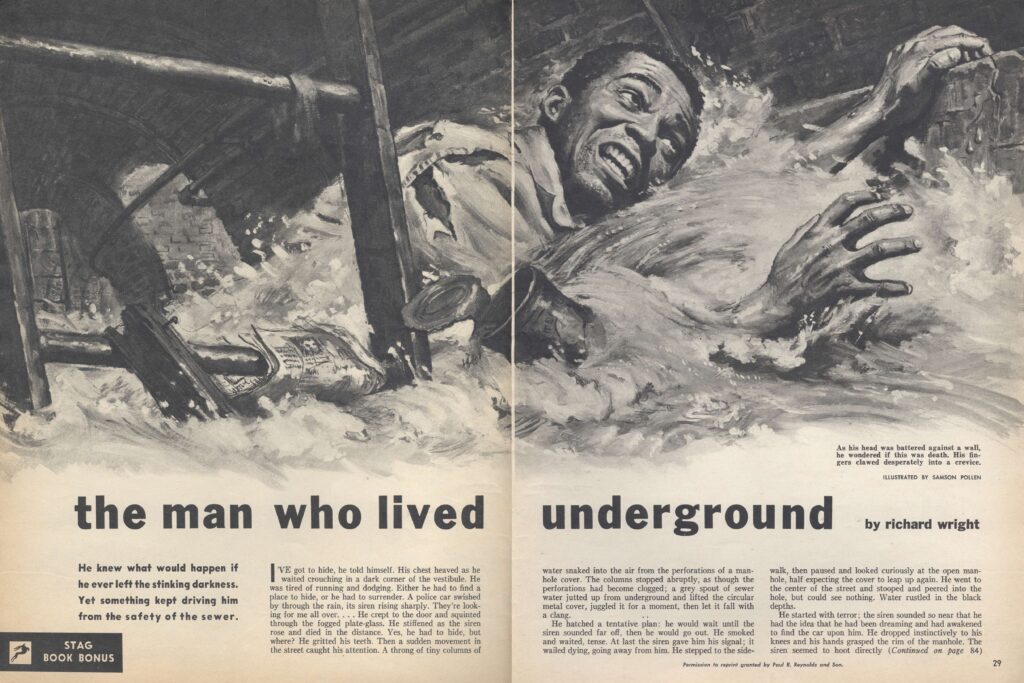 Richard Wright based the story on a true account he’d read of a white criminal living beneath Hollywood, California, and its tone is both gritty and surreal, sliding between a pulp story and a dream, as if his character is descending into the subconscious of his society and coming back up with new knowledge. Fred soon finds that he can spy into various establishments from behind their walls and under their floors: a Black church, an Undertaker’s, a Real Estate office, a Butcher’s shop, a Jewlery store. He watches men living “within the narrow grooves of habit,” the world above him now seems like “a wild forest filled with death, stalked by wild animals.” Pulled out of that society by blame and false guilt, dissociated and decontextualized himself, its trappings no longer mean anything to him; he steals their money and uses it to wallpaper his cave. 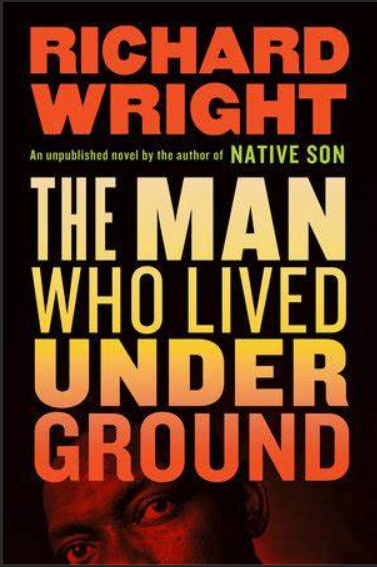 t’s a tricky tone Richard Wright pulls off here. Fred is not meant to be taken as a grimly realistic central character; and yet if he was too vague or symbolic, he might become a cipher- at a time when Black men were generally treated as ciphers by their society. The risk is writing something like Django Unchained, a story about the dehumanizing effects of racism, in which the title character has no recognizably human characteristics. This was really James Baldwin’s complaint about Native Son, after all- he felt that Bigger Thomas was not a flesh-and-blood man but a social category- although, in that case too, the novel was severely edited by the publisher, which was surely to blame.

Fred Daniels reads more, to me, like a mythic archetype than a cipher. Without being too heavy-handed, the story is clearly allegorical, and there are very distinct overtones of spiritual initiation in passages like:

And then a strange and new knowledge overwhelmed him: He was all people. In some unutterable fashion he was all people and they were he; by the identity of their emotions they were one and he was one with them. And this was the oneness that linked man to man, in life or death. Yet even with this knowledge, this identification with others, this obliteration of self, another knowledge swept through him too, banishing all fear and doubt and loss: He now knew the value and inexpressible importance of himself.

The hero has gone through a deeply altering experience. The basic structure of his ordeal is that of the initiate: cut off from his society, his social selfhood erased, isolated in an enclosed liminal space beneath the earth, his ego broken down, only to have a deeper understanding of humanity and the spirit revealed to him, possibly from within himself. I was reminded of the mysteries of Isis from Apuleius’s The Golden Ass, which is described as a type of voluntary death that the initiate undergoes. I also thought of Demeter in the Underworld, who was said to preside over the cycle of life and death.

And, at points, Richard Wright describes Fred’s experience as life-in-death, while those above are experiencing death-in-life. In a fascinating essay attached to the novel, he explains how one key inspiration was his deeply religious Seventh-Day Adventist grandmother, a woman who lived in this world, but was detached from it and cut off by her profound faith. In a sense, blame and guilt sever us from the social world around us. In the essay, Wright compares his writing process to jazz and he riffs throughout the novel on the theme of guilt, the guilt that plagues his character throughout his life, the schizophrenic false guilt assigned by white society, and the more profound guilt assigned to all men by mortal existence.

We are all both residents of the higher world and the lower one. As an exiled outsider, Fred is able to bear witness to that guilt, the greed and violence and meanness of his fellow men, and he recognizes some of it within himself. He returns from his time in exile with a prophetic message of shame and sin, much of which he is taking upon himself. His society, heading off enthusiastically to war, is not ready to hear it, and ironically enough, nor were publishers in 1942. But, we’re quite fortunate that this great and inspired novel was pulled up from underground at a time when its message is no less urgent.

So, what are YOU reading, watching, pondering, playing, or revealing this weekend?