Of Poverty, Cancer, Bureaucracy, and Death 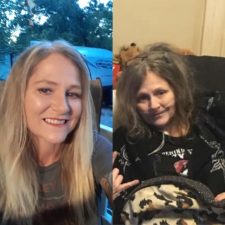 The author’s sister a year ago, left, and now.

The remainder of my sister’s life will be measured in days.

The cancer she thought she beat six years ago came back strong and angry, invading her lungs and liver and spine. By the time she found out — when the fluid buildup around her lungs sent her to the ER believing she had pneumonia — there was nothing to be done for her except Fentanyl patches and Oxycodone.

After her breast cancer was declared in remission following chemo and a double mastectomy in 2014, she was supposed to go for regular annual follow ups to make sure the disease stayed gone. Funny thing though; oncologists like to be paid for their services.

My sister is a massage therapist, working most recently as a contractor at a chiropractor’s office, a job from which she was laid off in December. Such an employment arrangement does not provide health insurance benefits. According to her 2019 Form 1099, she made less than $15,000 last year, which means she also could not afford to purchase her own coverage.

The state of West Virginia took the Medicaid expansion under the ACA, permitting the state’s program to cover low income adults. But my sister doesn’t live here; she lives in Oklahoma, where she wouldn’t qualify unless she was disabled or had a minor child, as she did during her first bout of cancer. She was what’s known as an “ABAWD”, or “able bodied adult without dependents”, a category of person for whom Medicaid is not available in states like Oklahoma.

So when my sister tried to schedule her yearly check ups, the oncologist required payment up front. It was several hundred dollars for the visit and associated testing, money she didn’t have. I would have given it to her if I’d known, but she never told me. She just didn’t go.

The trip to the ER became an extended inpatient stay, while they ran their tests and performed procedures and tried to help her breathe. There were x-rays, MRIs, biopsies, fluid withdrawals, the insertion of a chemo port she would never actually use. Lots of billables. When they ran out of tests and she was stable, they sent her home with oxygen tanks, some prescriptions she couldn’t afford, and a terminal diagnosis. She was referred to the Oklahoma Cancer Specialists and Research Institute for follow up.

My mother and I left West Virginia as soon as we could to get to her. I coped with seeing her pale, shrunken, and fragile self by getting down to business. No appointment had been scheduled with the Cancer Institute, so I started there. I called to get her in to see the oncologist. Of course, the response was to ask me what kind of coverage she had. I explained. “Then we need to schedule a financial appointment,” they said. The doctor wouldn’t see her until after that.

We saw the primary care physician she had been referred to. The receptionist was incredulous when she asked questions about my sister’s income as part of our application for sliding scale fees. “She must have some means of support,” she insisted. But she offered the sliding scale fee for the visit. I paid the $45. The doctor she saw, who knew nothing about her except what he could glean by scanning her medical records in the time it took to walk to the exam room, didn’t know what she was doing there. “I’m not sure what I can do for you,” he said. “Who is your oncologist?” We left that appointment with another prescription, this time for heartburn medication.

A few days later I took her out in the cold to the financial appointment at the Cancer Institute. I pushed her into the building in a borrowed wheelchair, along with her oxygen tank. We met with a “patient advocate” who filled out Medicaid paperwork. She explained that the state has a special Medicaid program for breast and cervical cancer. However, she cautioned, because it was metastasized to her bones, the program may deny her application as it’s not technically “breast cancer” anymore (not true; the mets would show as breast cancer cells if biopsied, but I was assured that doesn’t matter.) I asked if we should apply for traditional Medicaid just in case, since she was, obviously, no longer “able bodied”. No, she said. It was best to wait for a decision from the breast cancer program. Which, by the way, may take up to thirty days. I again asked for an appointment with the oncologist. I offered cash up front. She demurred, told me to call in a few days.

I took my sister home.

I scoured the Internet for charity care and financial assistance and came up empty. I filled out her social security disability applications and food stamp application. I ignored the patient advocate and applied for traditional Medicaid too. I pored over her test results, doctor’s notes, and discharge papers looking for the ones which best pleaded her case. I sat for two hours in the local social security office to drop off the paperwork. Meanwhile, my sister coughed up blood, panicked over her shortness of breath, and moaned with every movement as the pain of her fractured back broke through the opioids. There was no way she would have been able to accomplish these tasks on her own.

I called again to try to get her into the oncologist and left a message. They called back and left me a cheerful message in return: “Her Medicaid hasn’t been approved yet. We are checking every day!”

It won’t matter anyway. Last Friday night we called an ambulance because she struggled so hard to breathe. She was admitted. When they sent her home the next day, we had a new referral: Hospice.

At this point, nobody had given her a prognosis other than “no cure”. The hospice nurse came to see her. She estimates days, maybe weeks. The non-profit hospice doesn’t have a bed available so for now, she’s at home. She has started to swell as her liver fails her and fills her body with poisonous fluid.

This is how a vibrant 50 year old woman goes from active to death’s threshold in a few weeks’ time. It’s not certain that earlier detection or prompt treatment would have bought her more time. But we will never know, because my sister has been deemed unworthy of health care coverage by the state she lives in. She was working, paying her rent, doing all those things that people who “want handouts” allegedly don’t do, but it wasn’t enough. It all happened faster than the wheels of bureaucracy turn.

The system is an accomplice to the cancer that will kill my sister, slowly and painfully and with little dignity. Maybe Medicaid will approve her soon, but it won’t matter by then; there’s no Medicaid coverage for cremation.

The author’s sister died February 4, 2020, three days after this post was published.