History and Literature’s Complaint Against a Modern: A J.K Rowling Poem 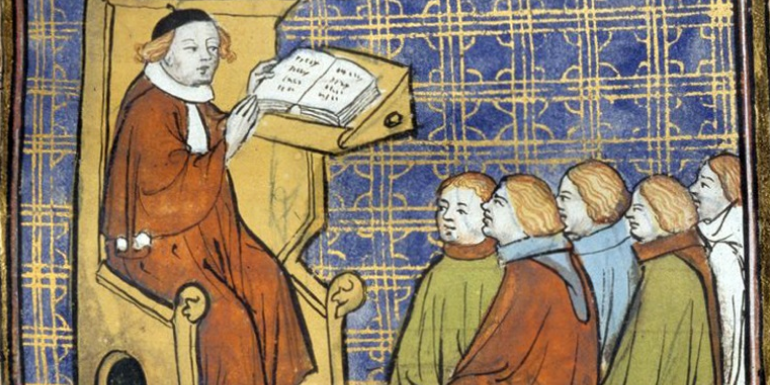 Below is my ham-fisted poetic reply to the tweet about J.K Rowling below. Why in poetry? It’s a long story. Suffice it to say, when you begin a road trip on a motorcycle with your dog—wearing a World War I pilot’s helmet and goggles—in a sidecar, you finish it that way, even if your realize halfway that a rented RV was a far better idea. 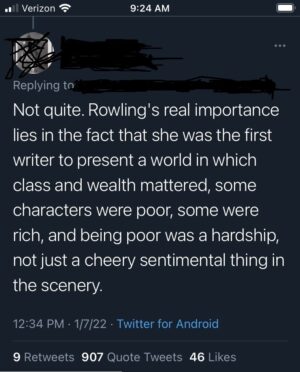 As I strolled ‘cross a public green—a sward
Where just & gross opinion each are marred—
As I do live by dopamine a fool
Began to type & laid a steaming stool
Of such great volume—all before ‘twas waste—
That men before it’s septic flow in haste
Sought higher ground. It’s matter was defense
Of a wealthy scrivener held in woke contempt
Asserting a matter of biology:
That pricks will every man in time belie,
And ladies giving birth monopoly
Do hold. So bold was she! He countered thus:
This J.K. Rowling was nigh virtuous.
(She’s sins, of course—so do we all—her tales
Are ships propelled by clouds of threadbare sails
Where evil comes in classes, terms, exams
And Wonder’s veneer hides lean-tos tightly crammed
With easy solutions & ill-woven threads.) What could
Be said in Lady Rowling’s favor? Good
And merit, value, worth & wisdom serve
To cause a writer’s work to be preserved.
Into the lists, her honor to defend
This wag struts bold. His armor’s strength depends
On this idea: Dame Rowling’s showed the poor
With virtue as had ne’er a pen before.
I’d like to channel the spirit, if I may,
Of Chaucer’s Wife of Bath: The fuck you say?
The Weasleys were altruistic innovation?
Then History, Literature speak in indignation:
Did not Our Lord with whores and debtors move
And was this not example of His love?
Was ‘t not St. Bede who sang the swineherd’s hymn?
Was Everyman of mysteries not kin
To all mankind both high and low? I know
That modern minds myopic often grow.
Have we forgotten the porter of Macbeth?
Or the feast prepared for star-crossed Juliet?
Did the ass-headed weaver not give the Duke a play?
Was the bed a queen’s where Falstaff sotted lay?
With muleteers & goatherds did the Don
Of Spain consort, & galley-slaves anon
He freed, & all for the love of a farm girl sweet.
A refutation would be scare complete
Without a stack of Dickens’s works around
Where the best and worst of slovens can be found.
(In the room the women come and go
Talking of Victor-Marie Hugo)
Would Steinbeck’s Grapes have passed this Rowling Test?
Or George & Lenny’s discov’ry that the best
Laid plans of mice & men gang aft agley?
Could anyone in honest conscience say
That such a house of cards—each card a knave—
Was house at all or just a scattered pack
Strewn on the floor? I’ll pry at no more cracks,
But will say this: Such Modern, tidy boors
May stalk our culture, mindless, evermore.