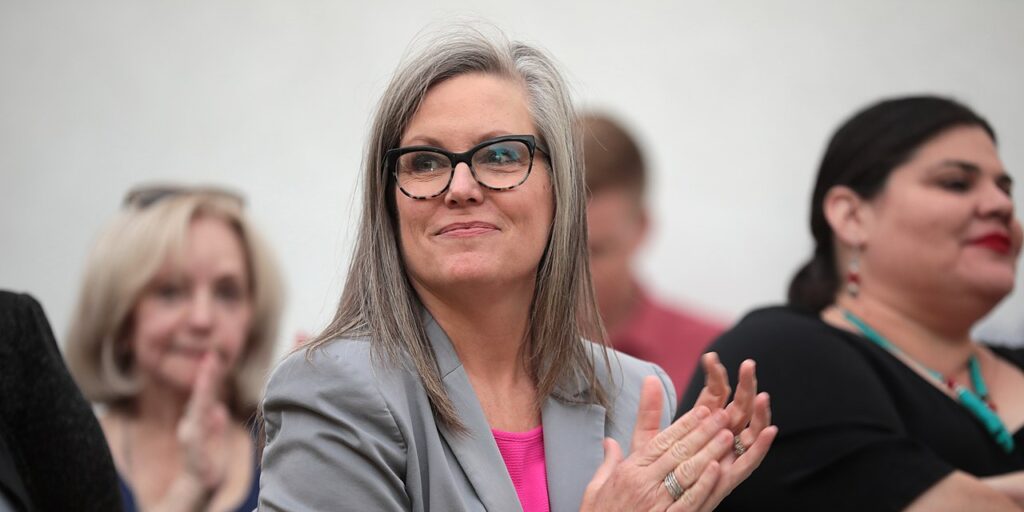 After a week’s worth of counting, Arizona Secretary of State Katie Hobbs has defeated former tv anchor Kari Lake for governor.

Katie Hobbs, Arizona’s Democratic election chief who built a national profile by standing up to false claims about the 2020 presidential election, has won the state’s race for governor.

The Associated Press, NBC News and CNN called the race for Hobbs shortly after 7 p.m. Monday, following a nail-biter week of election returns that highlighted the competitiveness of politics in the state.

“Democracy is worth the wait,” Hobbs posted on social media before issuing a statement thanking her family, volunteers and staff for their work.

“This was not just about an election — it was about moving this state forward and facing the challenges of our generation,” the statement read, ending: “Let’s get to work.”

Late-in-the-race polling showed her Republican opponent Kari Lake, the former television news anchor, with the momentum as Nov. 8 neared. Instead, voters offered a stunning rebuke of Lake, who was one of the nation’s most prominent election deniers.

As Arizona’s 24th governor, Hobbs will be the fifth female to hold the top elected office, more than in any other state.

The toss-up race was one of the most closely watched in the country, a reflection of the swing state’s political landscape shifting from ruby red to purple in recent years.

The suspense continued for nearly a week after Election Day while the number of votes separating Hobbs and Lake remained too few to reliably declare a winner. Hobbs initially held a 14 percentage-point advantage on election night, which Lake chipped away at as the counting of votes continued.

That course echoed former President Donald Trump’s slow comeback against Joe Biden as votes were counted in 2020. Just like Trump, however, Lake ultimately was not able to surpass the Democrat.

Hobbs, 52, was narrowly elected secretary of state in 2018, after serving in the Arizona Legislature for eight years. As secretary of state, she oversaw elections and some business records. In that post, she also defended Biden’s win in the face of Trump’s unprecedented efforts to remain in power, earning herself a national profile while doing so.

Before she was a lawmaker, Hobbs worked in behavioral health and handled contracts and lobbying for the Sojourner Center, one of the nation’s largest domestic violence shelters. A native of Tempe, she is married to a child therapist, and they have two adult children.

Hobbs’ election to the Governor’s Office was declared with less than 1 percentage point separating her from Lake, about 20,000 votes. But with few votes left to count, Lake’s path to surpass Hobbs appeared impossible. Hobbs pledged to represent even those who didn’t cast their ballots for her, over 1.2 million Arizonans.

“For the Arizonans who did not vote for me, I will work just as hard for you, because even in this moment of division, I believe there is so much more that connects us,” she said. “We all want safer streets, a secure border, better schools, lower costs, and water for generations to come.”

Her campaign for governor centered on a pledge to restore abortion rights that were limited when the U.S. Supreme Court overturned Roe v. Wade earlier this year. She has plans to bolster teacher salaries and create tax credits for Arizonans who pursue career and technical education and lower-income families with children.

But the hallmark of her pitch to Arizonans was that Hobbs would defend democracy, and she painted Lake as too extreme for her unwillingness to say she would accept defeat and for her past comments that she would not have certified Biden’s 2020 win.

Whether Lake will concede to Hobbs is unknown. Lake’s campaign did not respond to a request for comment Monday night, but she wrote on social media: “Arizonans know BS when they see it.”

The question now is what will Kari Lake do? Arizona was ground zero for “stop the steal” in 2020 and years worth of election-related lunacy, grifting, and frankly embarrassment to the state as the rest of the nation watch the shambolic “forensic audit” and other such messes in Maricopa County. Lake herself has it as bedrock lore in the Kari Lake political story, as she told a BBC crew during the campaign:

Interviewing Lake is an exercise in frustration. First, she loves fighting with the press, and is uniquely well placed to do it.

She told reporters that if she becomes governor, she’ll be their “worst fricking nightmare”.

Second, she refuses to concede any doubt at all in her own election denial. During our interview, I put it to her that there was no evidence the 2020 election had been stolen. I pointed out that the Arizona Republican party’s own recount had confirmed that Joe Biden had won the state. I reminded her that over 60 lawsuits claiming election fraud had been dismissed for lack of cause by judges around the US, including judges Trump himself had appointed.

It made no difference. She is far more disciplined and on message than Trump could ever be.

“We could sit here all day,” she said. “I can go over the evidence and the media still won’t believe it because they’re on a mission to discredit that.”

She said evidence has never been presented, at least not in public. If the Lake team has it, we haven’t seen it. She told me Arizona’s attorney general has sat on a mountain of evidence. He says he’s wrapped up his investigation and there’s no evidence of fraud. The back-and-forth of baseless claims is frustrating. This should be black and white, fact-based, especially, one would think, to a news journalist.

I went into my interview with Lake hoping to discover if she really believes what she says about the election being rigged, or if she just uses the conspiracy as a useful way to win votes. Honestly, I left none the wiser.

And maybe it doesn’t really matter. Lake is still casting doubt on the validity of elections, this time her own. And whether she believes it or not, millions of her supporters do. That’s where the damage to American democracy can be done.

Now though, finding herself on the outside looking in at an election she didn’t expect to lose, Lake and her “war room” are trying to figure out what to do next, according to reporting by the Washington Post:

Within Lake’s war room, where the mood has shifted in the past week from giddy anticipation to grim resignation, discussions have centered on how Lake should speak about a loss. Among those who have made appearances are some of the biggest names in Trump’s orbit, including Stephen K. Bannon and Christina Bobb, a former One America News anchor who aided a review of 2.1 million ballots in Maricopa County after the 2020 election. Trump himself called in on Sunday…

Additional results from Maricopa County were expected to post late Monday. People in the GOP war room expect those results to cut into Hobbs’s lead, but probably not by enough to change the trajectory of the contest…

Lake, members of her campaign team and her allies have huddled at various times at the hotel in recent days, culminating in a phone call with the former president on Sunday in a side room near the conference space. Trump, who made Arizona a centerpiece of his false claims of voter fraud in 2020, expressed disbelief that the Republican candidates were losing, according to three people with knowledge of the call.

But Lake has mostly fallen silent in recent days, even as Hobbs on Sunday issued a statement from her campaign manager saying the Democrat was the “unequivocal favorite to become the next governor of Arizona.”

Kari Lake might not be done crying foul about elections in Arizona and elsewhere, but after two years of the “cyber ninjas” farcical and an entire campaign of swearing not to accept anything but a win, the appetite for more election denialism might not be that great even among her base for a candidate that underperformed compared to other Republicans in the state, Trump in 2020, and most other election metrics. The usual suspects will howl about election fraud, but a Republican Party that has now seen both US Senate seats and the Governor’s office go to Team Blue should find a mirror first, ask some hard questions, and stop blaming anyone other than the face staring back at them.