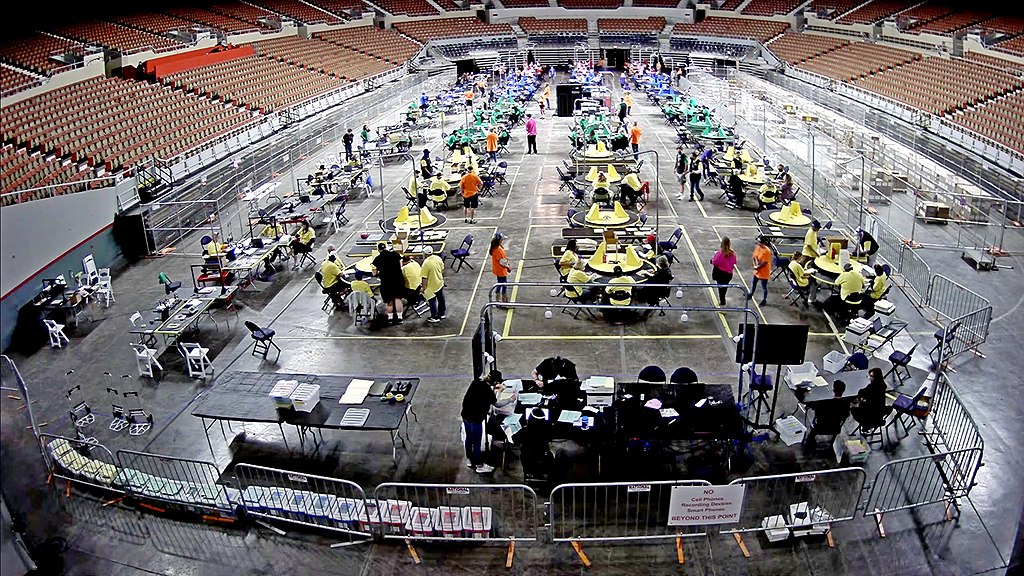 I am.. actually somewhat surprised.

A monthslong hand recount of Maricopa County’s 2020 vote confirmed that President Joe Biden won and the election was not “stolen” from former President Donald Trump, according to early versions of a report prepared for the Arizona Senate.

The three-volume report by the Cyber Ninjas, the Senate’s lead contractor, includes results that show Trump lost by a wider margin than the county’s official election results. The data in the report also confirms that U.S. Sen. Mark Kelly won in the county.

The Cyber Ninjas and their subcontractors were paid millions to research and write the report by nonprofits set up by prominent figures in the “Stop the Steal” movement and allies of Donald Trump, but Cyber Ninjas CEO Doug Logan said that would not influence their work.

For the last few months, the Cyber Ninjas have been a regular target of ridicule in the media. Their highly partisan “forensic audit” involved such things as not maintaining a proper chain of custody, marking up ballots with pens, spiriting the ballots away to unknown locations, extending the audit by three months and accessing voting machines (which may require them to be replaced). Our friend the Election Babe has worn a dent in her office desk from banging her head over the way this has been handled.

I know several people who work for Maricopa’s election dept. Their safety has been in jeopardy for months. Over a tempest in a teapot.

Between this and that employee in Maricopa stealing hard drives back in the fall of 2020, chain of custody for Maricopa election data and equipment will never be trusted again.

My poor friends at Maricopa worked untold hours to get all the materials for the audit packed and ready. The state senate should be required to pay a steep penalty for each day they were not ready, they lived up to their end of the deal, under duress, with very little time to comply. Yet, they did.

This is a leaked report, so we’ll see what the official report says. But assuming it is accurate and putting aside the numerous issues Genya raises…is this going to put the conspiracy theories to rest? Hardly. I would roughly divide the people claiming Trump won the election last year into three camps:

Notice I haven’t categorized Trump. I honestly don’t know what he thinks. Half the time, I think he’s just grifting and half the time I think he’s a deluded old man. If forced to guess, I would speculate that he probably also is somewhere in the in-between. Somewhere deep inside, he knows he lost. But he’s so narcissistic, so surrounded by grifters willing to indulge him and so eager to make money off it, that he’s convinced himself he won.

It’s not clear where the Cyber Ninjas are in this either. They raked in a cool $5 million for this business. And while their results conform roughly with the official count, there is this:

The draft reports reviewed by The Republic minimize the ballot counts and election results and instead focus on issues that raise questions about the election process and voter integrity.

In other words, they’re already doing bullpen warmup for how there wasn’t fraud in the counts but massive fraud in who voted. Specifically, the make vague hand-wavy allegations about mail-in ballots voting with a prior address, people voting in multiple counties and more ballots returned than received. Maricopa County officials debunk those claims here. Maricopa County, of course, was the target of the audit. But, unlike the Ninjas, they have documented their work, maintained chains of evidence, had bipartisan observers and been in compliance with state and federal election laws.

We’ve seen this before with conspiracy theorists. When one claim is disproven, they move on to another equally spurious claim. And when that claim is debunked, the circle back to the original claim. I this case, the claim that the counts were fraudulent has been shown to be a lie. Now they’re circling to the claims that of course the count was fine because the real conspiracy was in fake votes being submitted. Donald Trump has already released a statement, which I won’t link, claiming that this study proves he won the election. And Kelli Ward, the crackpot Arizona GOP chairwoman, has also claimed this proves the election was stolen.

In the end, the belief that Donald Trump won the election is not based on evidence since there is and never has been any evidence that he did. It’s a religion. It’s a cult. Like everything else surrounding our 45th President. There is no evidence that will persuade the diehards. Maybe a few of the in-betweens will shrug and accept the results. But as long as they have something to cling to — and the Cyber Ninjas made sure to give them that rope — they’ll cling to it.

The good thing is that, for the election fraud grifters, consequence are coming. It turns out that there are a lot of people devoted to election integrity and a lot of prizes waiting for those who play stupid games trying to overturn one. Rudy Giuliani’s law license has been suspended and he’s lost his gig on Fox News. Sydney Powell and the Kraken team were given sanctions. Several of our friends who work in election have identified potential legal violations by the Cyber Ninjas and lawsuits have been threatened. It would not surprise me at all to see consequences come down.

But the grift will go on. As long as Donald Trump has control of the Republican Party’s id and as long as there is money to be made, these claims will continue to be made. In the end, the Cyber Ninjas adventure was exactly what we thought it was: a giant waste of time and money that changed nothing.