The Republican Civil War Is Upon Us 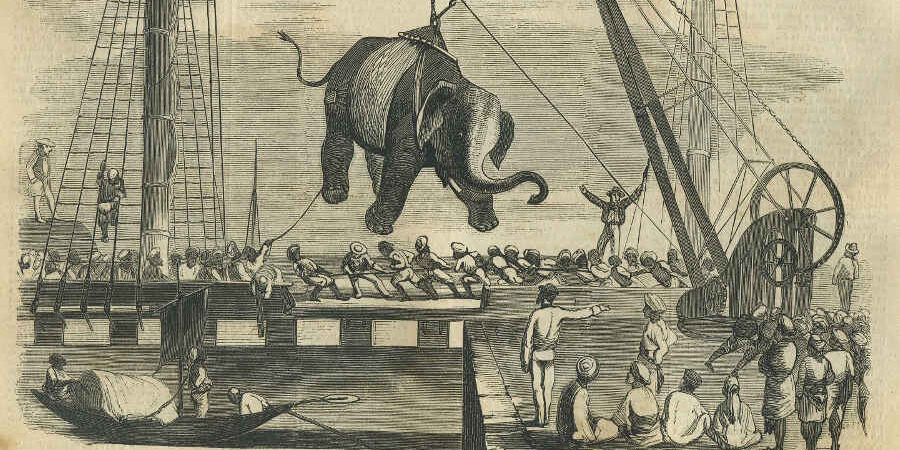 “Landing an elephant from shipboard at Calcutta,” from Harpers Weekly, 1858; via Wikimedia Commons

As I write this, the votes are still being counted from midterms, but the idea of a red wave has long vanished and the recriminations among Republicans have begun. The all-too-familiar-to-Republicans circular firing squad is in full motion with party members choosing two main sides.

On one side are the Republicans who blame Donald Trump and MAGA for the shocking defeat last week in which Democrats have so far gained one seat in the Senate to retain control of the body, gained a net of one governor (although that statistic is expected to increase soon when Arizona is called), flipped three state legislatures, and might still eke out control of the House.

If, over the past six years, you have wondered what it would take to make Republicans break with Trump, this may be it. I stress the “maybe.”

There have been times in the past when we thought it was over for Trump. There was the “Access Hollywood” tape, that time he fired the FBI director to stop an investigation into the “Russia thing,” when he withheld military aid to Ukraine to try to get dirt on Hunter Biden, and even when he lied that Democrats stole the election in order to whip his supporters into a frenzy to intimidate congressional Republicans into stealing the election for him. All of these examples were potential off-ramps for Trump-skeptical Republicans, but they didn’t take them. Why?

I think that the answer is a simple one. They didn’t want to jettison Trump because the Republican base was sold on Trump and they knew they needed the votes of the MAGA faction.

What makes this time different? I think there are two main factors at play. First, and most obvious, is the fact that Trump and MAGA are losing elections. It’s tough to make the case that the GOP needs Trump to win after the disastrous midterm showing that has Trump’s fingerprints all over it.

The second factor is that there is now an heir apparent in Ron DeSantis. Those who have been reading my stuff for a while know that I’m no fan of DeSantis, but much of the Republican Party now seems to be coalescing around the Florida governor. In 2016 and 2020, there was no individual candidate who could challenge Trump. It doesn’t look like that will be true in 2024.

The alternative to blaming Trump for the midterm mess is to blame anything and everything else. If you look at Republican operatives online, you see them pointing fingers at Mitch McConnell, the media, election fraud, mail-in ballots, and (probably) the position of the stars and moon on election night (there was the blood moon eclipse!).

So Republicans are choosing up sides and shots have already been figuratively fired. On Election Eve, Trump attacked the other Florida man with the nickname, “Ron DeSanctimonious,” and has since blasted DeSantis on not-Twitter and taken credit for the governor’s 2018 victory in Florida.

For his part, DeSantis has not taken the bait and has avoided a tit-for-tat with Trump, preferring instead to let his 20-point victory over Charlie Crist speak for itself. DeSantis’s win in Florida was one of the few bright spots for Republicans in this year’s midterms.

The battle is hardly over, however, as the Republican factions have not yet begun to fight in earnest. As the party prepares for the 2024 primaries, there will be a battle for the soul of the GOP.

It’s a battle that I would not have bet that the not-Trump faction would win before the election or afterwards if the red wave had materialized. Given the actual outcome, however, I think the ground is shifting. Donald Trump and MAGA are not out, but they did suffer an enormous setback. It isn’t clear that they can recover, but they won’t be going away either. It will be interesting to see how polling for the 2024 Republican primaries shifts in the coming weeks.

To be clear, most of the not-Trump people don’t have moral, ethical, or constitutional problems with Donald Trump, at least none that would matter if he could deliver Republican victories. They do have a problem with him when his behavior starts costing them elections. At least they eventually do. Trump arguably cost Republicans quite a few races in 2018 and 2020 as well.

No matter what Trump has done in terms of abuses of power or electoral missteps, he still has a huge, cult-like following. If Trump is not the nominee, a large part of the Republican base will not turn out – or may actively try to undermine whoever is the nominee.

But the reverse is also true. A lot of people won’t turn out if Trump is the nominee. As the events of January 6 unfolded, I saw a lot of faithful Republicans say that they would never vote Trump again. A lot of them still feel that way.

The five-point split between Brian Kemp and Herschel Walker in Georgia (and two points between Kemp and Burt Jones, the Trump-endorsed candidate for lieutenant governor) is evidence that candidates matter and that the MAGA label often does not help at the polls. So is the currently breaking news that Kari Lake is underperforming compared with Republican congressional candidates in Arizona.

Whether the party goes all-in on yet another Trump candidacy (which the skeptics would undoubtedly support if it happens) or a more traditional Republican candidate (which MAGA might not back), there are tough days ahead for the party. The ultimate nominee is not only going to face a bruising primary, because Trump is running and is primed to announce his candidacy this week, but will also be challenged with unifying a very divided party afterward.

There is some question about whether Trump will go ahead with his announcement, given last week’s difficulties. I think he will announce soon, if not according to his original schedule. For Trump, another presidential campaign isn’t just about trying to erase his legacy of being a loser; it is also about trying to avoid a federal indictment. And besides, Elise Stefanik has already endorsed him. Trump is running.

I think DeSantis is running as well, but he won’t be the only one to challenge Trump. And it may be that neither DeSantis nor Trump will be the last man standing. Early Republican favorites have often fallen by the wayside as the campaign progresses. Just ask Rudy Giuliani, Jeb Bush, Chris Christie, and Scott Walker to name a few. There is at least a decent chance that Trump and DeSantis will so damage each other that neither can cross the finish line.

The Republican civil war has been a long time coming. As a constitutional conservative who has been Never Trump for six long years, I plan to sit back and enjoy the (speaking figuratively) carnage. Those of us who have warned about hitching the party’s fortunes to Donald Trump feel very vindicated these days, but I doubt that we will be welcomed back no matter who wins.

And that’s okay with me. I’m happier being an independent and calling them like I see them than having to make excuses for bad partisan behavior. And besides, I don’t fit in with the Democrats and I can no longer trust the Republicans. Ever again.