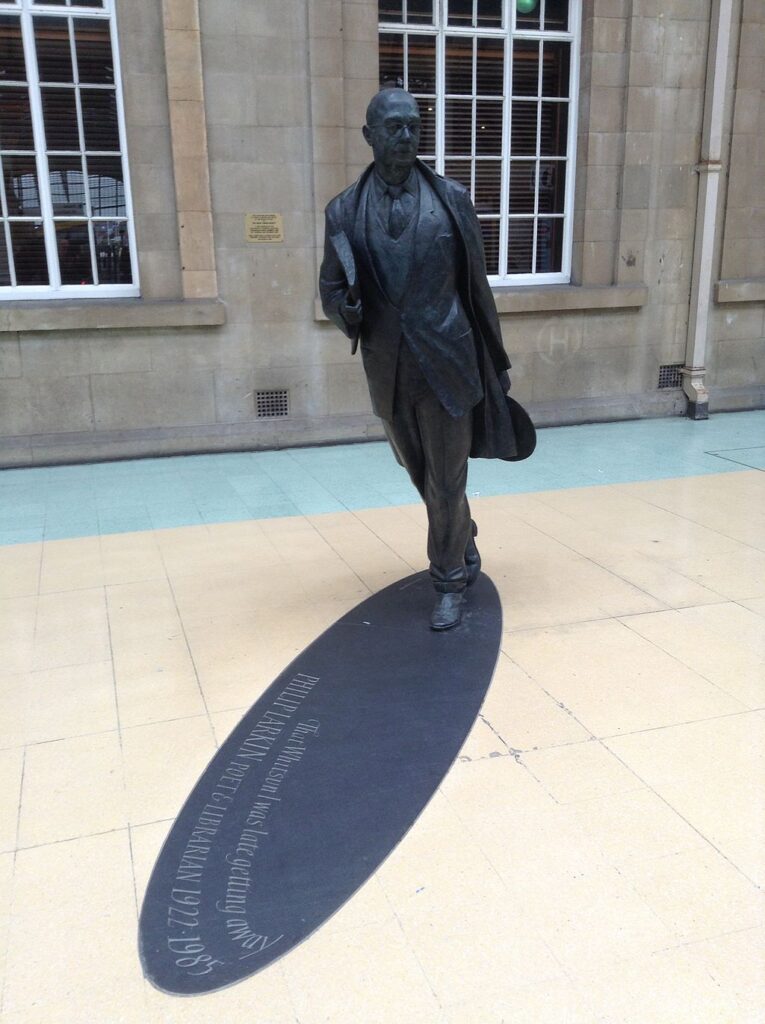 Happy P.O.E.T.S. Day! It’s been over a month since I posted one of these. Sorry, but life interrupts its own course sometimes. Unexplained absence due to a slack work ethic, galivanting across the countryside, or fitful bouts of Netflix bingeing aside, it’s that day again, so let’s let bygone days be bygone days and embrace the ethos of the moment to Piss off Early, Tomorrow’s Saturday, and having left work behind begin the weekend early with zeal and vigor and all sorts of other things we might feel when we find ourselves freed prematurely from the surly bonds of work.

I came across this week’s poet after doing one of my occasional listings of books that I feel like I should have read at some point in my life but never got around to. From my most recent reckoning I picked out Kingsley Amis’ Lucky Jim. Everything I knew about it should have beckoned me earlier. The book is supposed to be hilarious and nasty (in the cruel rather that the Debbie Does Dallas sense.) I love hilarious and nasty (both senses.)

I started it last night and can attest to the nastiness. It’s like a sardonic P.G. Wodehouse tired of an “Oh Gosh!” Bertie Wooster trying to avoid an accidental engagement to be married and recreated him as Jim Dixon, a social climbing would-be lecher, given the right number of bitters, and let him loose on the unsuspecting English gentry. Imagine Wooster as Michael Knight and Jim as Garthe. I’ve only read the first eighty pages so that’s all I can attest to though I can only imagine he’ll get worse as I read on.

Already Jim has shown himself to be one of the P.O.E.T.S. Day brethren with a simple but well executed escape from his employer’s weekend getaway at a country home allowing him to avoid all manner of explaining away beastly behavior. His gambit was a pre-planned phone call from a friend requiring his immediate presence back in town. Nothing complicated, but the classics always work. Well played Jim.

You may be wondering what all this has to do with today’s poet, Philip Larkin.

I generally read the introductions to books. I say generally because I’m odd, though fairly consistent. If the introduction is thirty-five pages or less, I usually read it. There are often interesting bits of info about the author or notes on a theme I may otherwise have missed. If the introduction is thirty-six to fifty pages, forget it. Too long and I just want to get to the meat of the book anyway. Longer than fifty pages though, and I’m right back to reading because at that length there must surely be something so complex in the text proper as to merit a comprehensive comprehension thesis without which I’d surely be lost.

The introduction to Lucky Jim was only thirty pages, so I learned that Jim was a composite of Kingsley Amis, the author, and Philip Larkin, the author’s best friend at St. John’s College, Oxford. The two were quite different. Amis was fair haired, good looking, and at ease in social settings where Larkin was balding and awkward (although for an awkward guy he certainly did carry on a lot of affairs.) What brought the two together was a love of all the literature they didn’t feel in the mood to savage and a general misanthropy toward the human race in general.

Both men found literary success. Amis became… well, Amis. Philip Larkin published a great deal of poetry to acclaim although, per Wikipedia, “His poems are marked by what Andrew Motion calls a ‘very English, glum accuracy’ about emotions, places, and relationships, and what Donald Davie described as ‘lowered sights and diminished expectations.’” Philip Larkin remarkably turned down the position of Poet Laureate as he felt at the time of the offer that he had gone too long without writing verse to accept the honor.

I’ve barely scratched the surface of Philip Larkin’s public work but what I have read I have thoroughly enjoyed. Here is the first I came across, as led to by the Lucky Jim introduction, directed at his friend Kingsley.

Letter to a Friend About Girls

After comparing lives with you for years
I see how I’ve been losing: all the while
I’ve met a different gauge of girl from yours.
Grant that, and all the rest makes sense as well:
My mortification at your pushovers,
Your mystification at my fecklessness—
Everything proves we play in separate leagues.
Before, I couldn’t credit your intrigues
Because I thought all girls the same, but yes,
You bag real birds, though they’re from alien covers.

Now I believe your staggering skirmishes
In train, tutorial and telephone booth,
The wife whose husband watched away matches
While she behaved so badly in a bath,
And all the rest who beckon from that world
Described on Sundays only, where to want
Is straightway to be wanted, seek to find,
And no one gets upset or seems to mind
At what you say to them, or what you don’t:
A world where all the nonsense is annulled,

And beauty is accepted slang for yes.
But equally, haven’t you noticed mine?
They have their world, not much compared with yours,
But where they work, and age, and put off men
By being unattractive, or too shy,
Or having morals—anyhow, none give in:
Some of them go quite rigid with disgust
At anything but marriage: that’s all lust
And so not worth considering; they begin
Fetching your hat, so that you have to lie

Till everything’s confused: you mine away
For months, both of you, till the collapse comes
Into remorse, tears, and wondering why
You ever start such boring barren games
—But there, don’t mind my saeva indignatio:
I’m happier now I’ve got things clear, although
It’s strange we never meet each other’s sort:
There should be equal chances, I’d’ve thought.
Must finish now. One day perhaps I’ll know
What makes you be so lucky in your ratio

—One of those ‘more things’, could it be? Horatio.

If you’d like to hear someone who seems to have just woken up read it in a disinterested voice you can do so by clicking here. Before you scoff believe me when I tell you that it’s worth it to hear him say “You bag real birds.”
Share