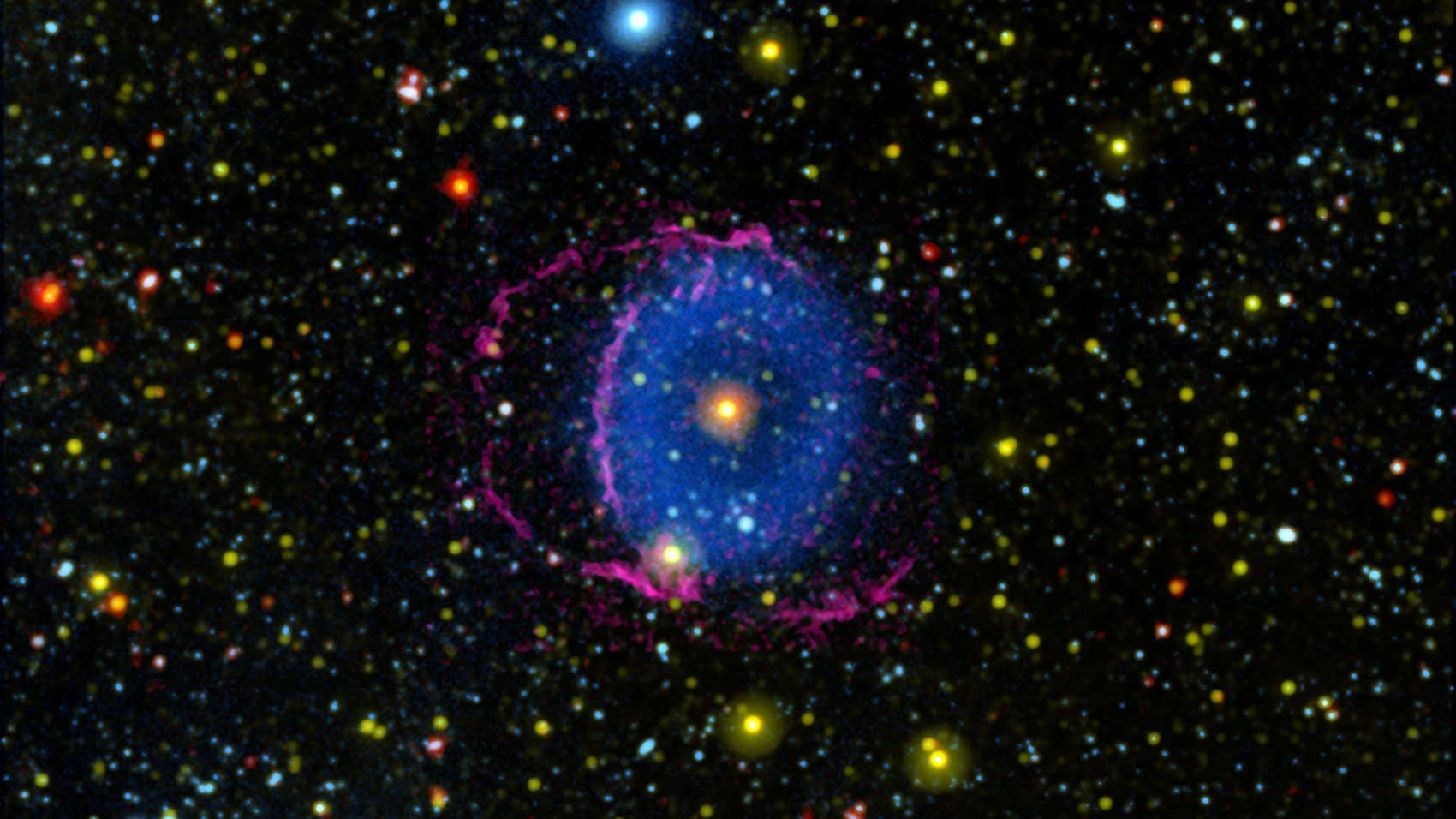 GALEX ultraviolet observations of the Blue Ring Nebula (in blue) together with ground-based observations in visible light (pink) finally reveal the true nature of this object: Two stars that merged into one, blowing out a wind shaped like two thick conical shells in opposite directions. Credit: NASA/JPL-Caltech/NASA/JPL-Caltech/M. Seibert (Carnegie Institution for Science)/K. Hoadley (Caltech)/GALEX Team

[ThTh1] The last few weeks have been filled with horrible news on COVID: rising caseloads and now rising deaths; an Administration that is more interested in fighting useless legal battles over the election than planning for the future; etc. But it’s also brought new hope. Both Moderna and Pfizer have released results on their respective COVID vaccines, which show 90-95% effectiveness, a reduction in the severity of the disease and mild side effects. A new study indicates that immunity may last a long time in most people, incidents of re-infection notwithstanding. All of this indicates that we may be seeing the light at the end of the tunnel and that, within a few months, we may be able to start emerging from this crisis.

Unfortunately, it has also brought a wave of new stupidity from the COVIDiots.

* (estimating 200 reinfections out of 11 million Americans, which is likely an overestimation of actual reinfections)

The silliness of this tweet is difficult to measure without resorting to the metric system. First of all, 200 re-infections is what we know about. The actual number of re-infections is almost certainly much higher and the immunity of those exposed is probably closer to that of the vaccine.

Third, the side effects of the Moderna vaccine, so far, can include pain at the injection site, fatigue, muscle aches and headache. These symptoms hit about 10% of those who get the vaccine and are generally short-lived. The side effects of COVID infection can include permanent lung damage, kidney failure, hospitalization and death. COVID is more likely to put you in the hospital and the vaccine is to give you a headache.

Now Rand has since “clarified” what he was saying to the “haters”, saying that he was just saying that those who’ve had it are immune. But, first of all, we don’t know how strong their immunity is. And second of all, Paul has to know the audience that he’s speaking to. We have a large segment of this country that is still in denial about the severity of this pandemic and the steps necessary to mitigate it. There are reports that COVID patients are refusing to accept their diagnoses. And the current explosion is being fed by people ignoring guidelines (including, it should be noted, many politicians who don’t think the rules apply to them). His following includes a lot of libertarian-ish cranks. To claim innocence over how that tweet will be read displays either shocking naïveté or incredible disingenuousness.

Then things got even dumber yesterday. A Danish study found minimal beneficial effect for mask-wearing. The COVID “skeptics” immediately jumped on it proclaiming that his proved masks don’t work and are a government plot or mark of the beast or whatever they’re claiming this week.

But this take is complete tommyrot. They study, linked here, had 6000 people in it. But about 1200 of them failed to complete the study. Of the remainder, half were told to wear masks while the other half were told not to. No actual monitoring of their compliance was done. The study was done in May and June, when COVID infections were only a few dozen a day in Denmark. The result was that 42 people in the experimental arm became infected while 53 in the control arm did. This is such a tiny result that the uncertainties cover anything from masks cutting infection rates by 50% to increasing them by 23%. And that’s just the statistical noise. You add in the problem that the entire data set is basically anecdotal, and it becomes worthless.1

It’s not even clear this kind of study is appropriate. The point of masks is not that they prevent you from catching the disease; the beneficial effect to mask-wearers is small. The point of masks is that they keep the infected from spreading the disease unknowingly. So, what you really need to be looking at is what happens in communities that adopt masking. And actual good studies have repeatedly shown that masks work. They are not 100%. But they help. A lot.

This is what I find must frustrating about the COVIDiots. They have been doing this garbage for almost a year now: cherry-picking weak studies that support their points and ignoring the massive swaths of studies that contradict them. Some are still citing the early garbage studies at Stanford and UCLA that claimed the fatality rate was below that of the flu, even though those studies have been repeatedly debunked and are belied by the massive body counts we have endured so far.

[ThTh2] Speaking of bad science, a recent study was touted as claiming that it is too late to prevent catastrophic climate change. I was skeptical because it was published in Scientific Reports. While the journal is technically under the Nature umbrella, it has … a reputation for occasionally publishing junk science. Thankfully, an actual climate scientist was on Twitter to debunk it.

[ThTh3] Oh, and that “mink COVID mutation is going to kill us all” story? That’s probably not going to happen.

[ThTh5] The UK is looking into small nuclear reactors as a possible way to fight climate change, committing 500 million pounds to the endeavor. I heartily approve.

[ThTh6] What created the blue eye I used for this week’s image? Would you believe … cannibalism?

[ThTh7] This article not only describes a cool device used to measure the blueness of the sky. It contains a link to one of the most concise explanations I’ve read of why the sky is blue. (H/T: Will)

[ThTh8] In February 1993, I was a young undergraduate working on a radio astronomy project in Minnesota. I had spent one morning sitting on the trunk of my roommate’s car to add some extra weight so that he could get out of the snow. So, I was quite literally freezing my ass off. As I came into the observatory to work, my advisor mentioned that he had an observing run at Arecibo, Puerto Rico coming up, but he couldn’t do it. Was it possible I could do it?

The 1000-foot radio telescope was my first ever observing run and it spoiled me rotten. The telescope was magnificent, the data amazing and the weather beautiful. Despite my acrophobia, I got to climb up into the receiving station (if you’ve ever seen the movie Goldeneye, it’s where they filmed the climax of that film). At one point, we were observing for 28 hours straight and the postdoc I was working with went to sleep. So, there I was, all of 20 years old, in command of one the biggest telescopes in the world.

I mention this because Arecibo might be finished. The damage done in the recent collapse is growing. It will be a terrible pity if this titan of science dies. There is simply no replacing it.

UPDATE After this posted, NSF officially announced that Arecibo will be demolished.

[ThTh9] Who needs science fiction when you have exoplanets?