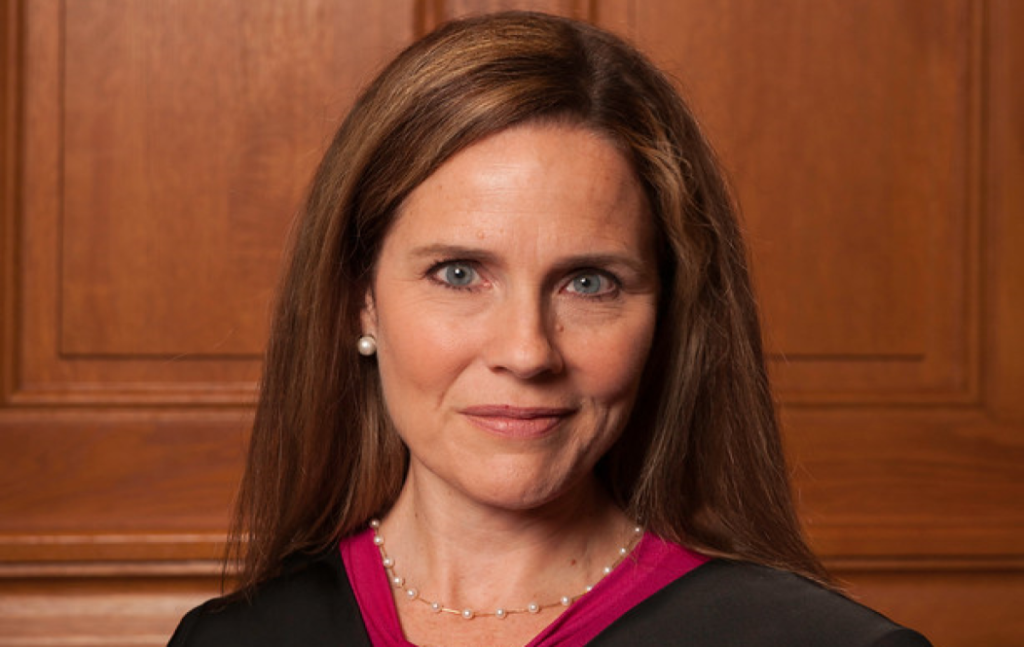 Unless something really screwy happens, and it’s 2020 so…yeah, President Trump will announce Amy Coney Barrett as his nominee to replace Ruth Bader Ginsburg on the Supreme Court.

President Trump has told people around him that on Saturday he plans to nominate federal appeals court judge Amy Coney Barrett to fill the Supreme Court vacancy left by the death of Justice Ruth Bader Ginsburg, putting forth a nominee who, if confirmed, would ensure a solid conservative majority on the high court for years to come, according to people familiar with the matter.

Democrats have little chance to block the nominee, but a bitter Senate battle looms in the weeks ahead of the Nov. 3 election, the results of which Trump has said may end up before the high court.

Barrett’s confirmation would replace a liberal icon with a deeply conservative jurist whose views suggest she might vote to further limit abortion rights, an issue that animates conservative Republicans and evangelical voters.

Barrett, 48, could hold the lifetime seat for decades. She would join two other relatively young, deeply conservative jurists chosen for the high court by Trump. Trump’s first two appointments, Neil M. Gorsuch and Brett M. Kavanaugh, are in their 50s. The trio would represent one-third of the body and form a new 6-3 conservative majority.

The people familiar with the matter, who spoke on the condition of anonymity because the decision has not been announced, cautioned that Trump could always change his mind ahead of the announcement but said he is telling others that Barrett is his pick. She is the only candidate he is known to have met with about the vacancy. Administration officials and campaign advisers were preparing for a Barrett announcement, and remarks for the president disclosing her as his choice have already been written, according to these people.

Some Videos of Judge Barrett:

Talking about her family at her 7th Circuit confirmation hearing in 2017:

Interview discussing the death of Justice Antonin Scalia in 2016, who Judge Barrett clerked for:

Interview with Amy Coney Barrett regarding death of Antonin Scalia

The invaluable SCOTUSBlog has a detailed breakdown of Judge Barrett and her career including various writings and rulings, but this bit from her 2017 confirmation hearing is likely to be the crux of the coming one:

When questioned about the article at her 7th Circuit confirmation hearing, Barrett stressed that she did not believe it was “lawful for a judge to impose personal opinions, from whatever source they derive, upon the law,” and she pledged that her views on abortion “or any other question will have no bearing on the discharge of my duties as a judge.” She acknowledged that, if she were instead being nominated to serve as a federal trial judge, she “would not enter an order of execution,” but she assured senators that she did not intend “as a blanket matter to recuse myself in capital cases if I am confirmed” and added that she had “fully participated in advising Justice Scalia in capital cases as a law clerk.”

Barrett’s responses did not mollify Feinstein, who suggested that Barrett had a “long history of believing that religious beliefs should prevail.” In a widely reported exchange, Feinstein told Barrett that, based on Barrett’s speeches, “the conclusion one draws is that the dogma lives loudly within you. And that’s of concern when you come to big issues that large numbers of people have fought for years in this country.”

In another article, “Stare Decisis and Due Process,” published in the University of Colorado Law Review, Barrett discussed the legal doctrine that generally requires courts to follow existing precedent, even if they might believe that it is wrong. Barrett wrote that courts and commentators “have thought about the kinds of reliance interests that justify keeping an erroneous decision on the books”; in a footnote, she cited (among other things) Planned Parenthood v. Casey, the 1992 decision reaffirming Roe v. Wade. Barrett’s detractors characterized the statement as criticism of Roe itself, while supporters such as conservative legal activist Ed Whelan countered that the statement did not reflect Barrett’s views on Roe itself, but instead was just an example of competing opinions on the reliance interests in Roe.

Path to the federal bench
Trump nominated Barrett to the 7th Circuit on May 8, 2017. Despite some criticism from Democrats, she garnered bipartisan support at her confirmation hearing. A group of 450 former students signed a letter to the Senate Judiciary Committee, telling senators that their support was “driven not by politics, but by the belief that Professor Barrett is supremely qualified.” And she had the unanimous support of her 49 Notre Dame colleagues, who wrote that they had a “wide range of political views” but were “united however in our judgment about Amy.”

After Barrett’s confirmation hearing but before the Senate voted on her nomination, The New York Times reported that Barrett was a member of a group called People of Praise. Group members, the Times indicated, “swear a lifelong oath of loyalty to one another, and are assigned and accountable to a personal adviser.” Moreover, the Times added, the group “teaches that husbands are the heads of their wives and should take authority for their family.” The newspaper quoted legal experts who worried that such oaths “could raise legitimate questions about a judicial nominee’s independence and impartiality.”

Barrett declined the Times’ request for an interview about People of Praise, whose website describes the group as an “ecumenical, charismatic, covenant community” modeled on the “first Christian community.” “Freedom of conscience,” the website says, “is a key to our diversity.” In 2018, Slate interviewed the group’s leader, a physics and engineering professor at Notre Dame, who explained that members of the group “often make an effort to live near one another” and agree to donate 5% of their income to the group.

On Oct. 31, 2017, Barrett was confirmed to the 7th Circuit by a vote of 55 to 43. Three Democratic senators – her home state senator, Joe Donnelly; Tim Kaine of Virginia; and Joe Manchin of West Virginia – crossed party lines to vote for her, while two Democratic senators (Claire McCaskill of Missouri and Robert Menendez of New Jersey) did not vote.