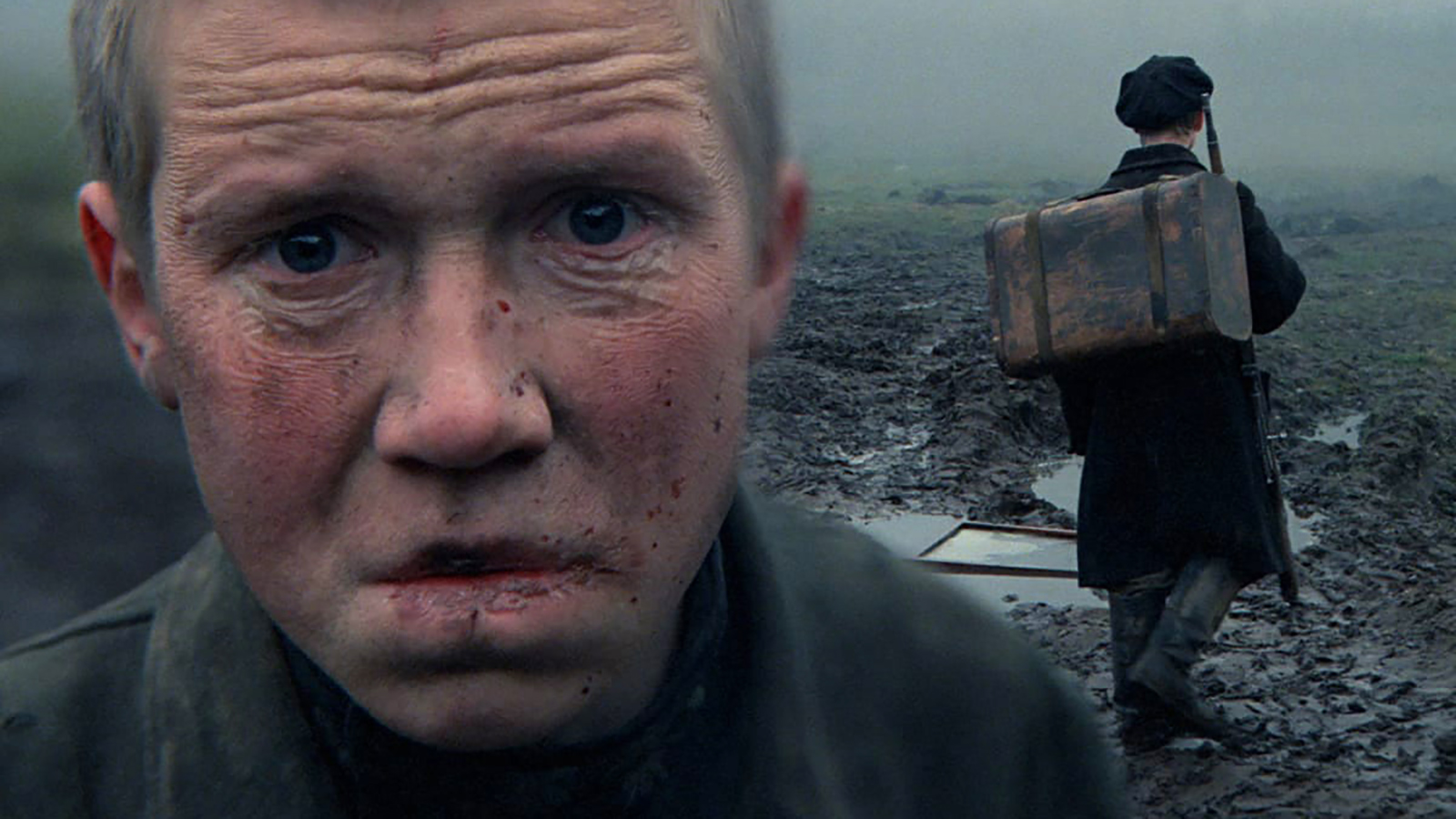 Looking into someone else’s eyes can be unnerving. Many people avoid direct eye contact, and it can feel as if the other person is calling you out, or you are somehow exposed before them. Many animal species will also perceive eye contact as a a threat. When there’s love, this exposure and vulnerability can feel intimate. When there’s a power imbalance, there’s a feeling of guilt, or of responsibility. We feel seen in our shame; Emmanuel Levinas said that we are responsible to one another in the face-to-face encounter. The wretched of the earth implore us by looking in our eyes, and insist that we don’t look away.

Maybe this is why film actors are instructed never to look into the camera- “barreling the camera” – and break the “fourth wall.” We’re supposed to feel like impartial observers when watching a movie, and, when they look at us, it’s unnerving as well- like we’ve been caught spying. Maybe they know we’re here… What do they demand from us?

The actors in Elem Kllimov’s 1985 film Come and See look into the camera frequently and throughout the course of the film we watch the living consciousness drain from their eyes until it seems like we’re staring at the bottom of a well. It’s chilling and guilt-inducing; they seem to implore us to do something, anything, to help them. J.G. Ballard memorably called this Soviet film, about the Nazi invasion of Byelorussia in 1941 and the partisans who fought them, the greatest anti-war movie ever made. It’s also been called the greatest war film, and I’ve heard it also described as one of the greatest horror movies ever made. There’s really little difference overall.

I don’t do “trigger warnings” really, but I will say this to anyone who hasn’t seen Come and See– it’s a powerful and surreal masterpiece, and if you aren’t totally devastated after watching it, I would be worried about the condition of your soul. 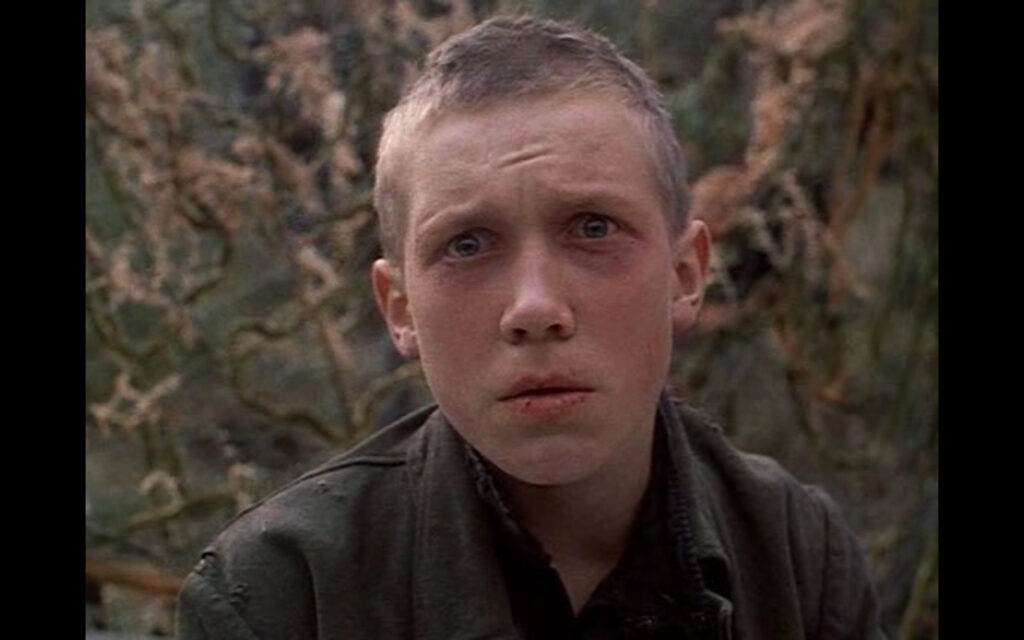 The entire film hinges on a remarkable performance by a then-14 year old Moscow schoolboy Aloysha Kravchenko, who plays the boy Flyora who will get swept up in the seemingly Sisyphean and hopeless task of defending his home against the Nazi hordes that have invaded with the intention of wiping them out. His mother begs him to stay home, but he’s basically press ganged in by older partisans and we see him in the first scene playing war in the mud, carving trenches, and pulling a rifle out of the muck. He obviously wants to go and is enlisted in a batallion whose commander tells the men:

The duration of this war depends on each and every one of us. There won’t be any cowards here.

By the end, this line will seem absurd. There will be absolute horror, enough for everyone, and all the characters will be reduced to animal panic, sooner or later. Cowardice and bravery have nothing to do with it. 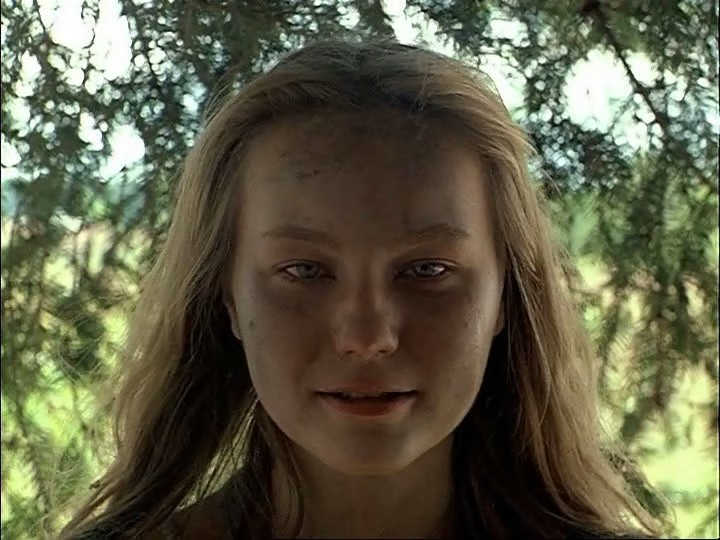 At first, it seems like Flyora will be spared though; a soldier needs new boots, so the commander takes the boy’s and tells him to stay back and watch the camp. He meets Glasha (Olga Mironova), a young girl working in the camp as a nurse. She seems unhinged and in a daze. Staring directly into the camera, she impores Flyora/the viewer:

More than nearly any other film I’ve seen, Come and See treats the barrier between viewer and viewed as a an offensive affront to be torn through. In these eerie early scenes Flyora is already being taught that his own discrete selfhood is largely illusory. He doesn’t know who he is yet, and what identity he has won’t serve him in war. By the end, there won’t be much of him left.

And then, things get worse. The camp is bombed from above by German Focke-Wulf Fw 189s. The explosions are horrific, deafening. The sound actually drops out to a muted ringing for several minutes. It’s a terrifying sequence and it’s just the beginning. By the end of it, the girl has the panicked look of an animal, no self-consciousness, eyes as recording devices.

And then, things get worse. Now, he has to find his family, so they return to the village. His home is empty with soup still cooking over the fire. At first, he is certain the family has just gone out, so they start to eat. But, then Flyora realizes something is wrong. He’s going to go find them, so he runs off with his gun and Glasha follows. And then, in one of the most haunting images I’ve seen in any movie, Glasha looks back briefly as they run past the home and she sees the bodies of all the villagers piled behind the barn he just ran past.

Flyora is wild with panic, convinced his family is on an island in the bog and he sinks into the muck trying to reach it. The children are “rescued,” if you want to call it that, by a partisan who brings them to the surviving villagers, now living in the woods. What follows is Flyora’s odyssey- a mad scramble to survive by running from one place to another, each one falling into oblivion. It’s a bit like a dream or a terrifying fairy tale where the children can’t escape the black forest. It follows all the beats of a horror film, while also seeming like an utterly realistic depiction of war as a mass mobilization of human disgust. We’re left with unforgettable images: 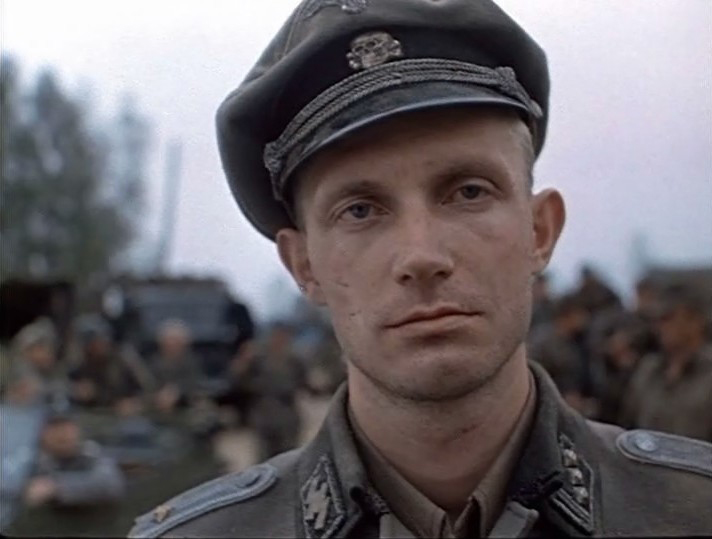 The man from the first scene who blames the boy for digging on the beach, now dying after being burned alive with petrol. His Uncle Rubezh dead in a field. The eye of a dying cow. The village mother staggering away after, we assume, being gang-raped. A Nazi motorcycle patrolling in thick fog. Finally, a village trapped in a church, and burned alive by Germans who are there only to do this, as one put it, to stop the contagion of bolshevism, and so these “inferior” people must be exterminated like an infestation. By the end of the war, the German soldiers would kill 1.6 million civilians in Byelorussia. 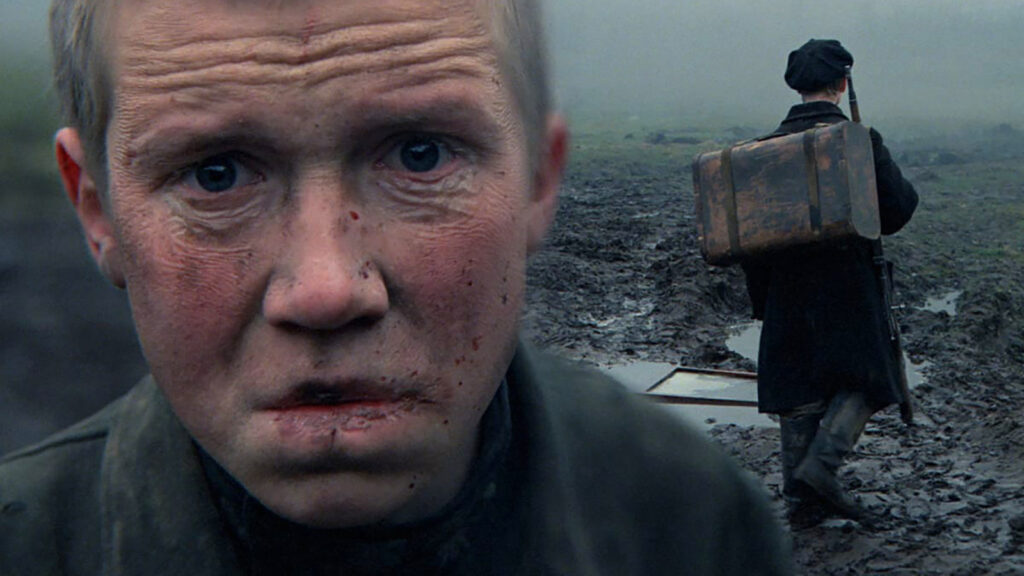 Finally, Flyora, who escapes, has the same look of animal panic. As the Germans leave, and the survivors follow behind, he fires his gun- the only time in the film- into a portrait of “Hitler the Liberator.” It gives him no satisfaction. In one of the most remarkable scenes in the film, he sees Hitler’s life playing in reverse through newsreel footage, back to the time when he, too, was a boy. What could possibly undo such a cataclysm? The twentieth century was simply a “secular” age in which man did his best to put hell on earth.

The title of the film Come and See, in fact, is from Revelations: the words “Come and see” announce the four horsemen of the apocalypse.

The surviving partisans round up a handful of Germans and kill them, but nothing is really undone. The world turned upside down can never be righted. As one Nazi begs for his life, he simply cries:

And on that note… what are YOU reading, watching, playing, pondering, creating, or destroying this weekend?