So once again we are at the point we reach here in the United States every ten years where we are forced to reshape our Congressional Districts. Some would say this is an extreme exercise in futility and others will say it is necessary to ensure proper representation in our republic. Both are right. Now, what if we really go at it and Restate?

Maura, what are you talking about? “Restate” isn’t a real term. Well, technically it is: “to state again or in another way,” per Merriam-Webster. So what happens if we separate major cities from their conjoined states? For example, if we separate Chicago from Illinois, congressionally nothing happens, but suddenly Illinois has two senators. “But Maura, Illinois already has two senators.” Yes and no. The issue in many states is that senators are actually elected by the major cities, so in Illinois that means Chicago gets the attention and down state not so much. Missouri is another good example. St. Louis and Kansas City are all anyone has to campaign in to win a senate seat, meaning rural Missouri does not get a say (in disclosure I have lived in the greater St. Louis region for 38 years.)

For this thought experiment let’s limit our thinking to metropolitan areas of roughly five million or more inhabitants or about half of the accepted size of a megacity. So what cities would be affected? Well, the top ten off the top of my head would be:

New States may be admitted by the Congress into this Union; but no new State shall be formed or erected within the Jurisdiction of any other State; nor any State be formed by the Junction of two or more States, or Parts of States, without the Consent of the Legislatures of the States concerned as well as of the Congress.

The Congress shall have Power to dispose of and make all needful Rules and Regulations respecting the Territory or other Property belonging to the United States; and nothing in this Constitution shall be so construed as to Prejudiceany Claims of the United States, or of any particular State.

So the founders sort of allowed for states to divorce, and there is precedent! In 1861 27 counties chose to leave Virginia and became West Virginia. Yes, this happened at the beginning of the American Civil War, but a precedent is a precedent none the less. So with precedent established, let’s dive into this rabbit hole of an idea!1

Chicago! Why Chicago Maura? It’s the smallest of your examples. Because it is sort of my back yard and being the smallest itis the easiest to deconstruct. So where and how do we draw the lines? I’m going to use existing county lines as opposed to random edges of weird congressional district boundaries. So here are the counties and their population–all data via Wikipedia.

From Illinois we take:

Wait Maura! That means Illinois will lose 68% of its population!

Yes, you are correct and part of the point of this exercise. Thirty-two percent of the Illinois population and 90% of it’s land, is governed by one city; what is locally called “Down State” is often left out or has very Chicago specific laws forced upon an otherwise very rural state—population density of Illinois in this project is 78.34 persons per square mile on average.

A narrow example, but I live down state and this is the view from my roof taken last summer:

Now I happen to be in a more population dense area just outside of St. Louis!

Part of forming Chicago into a state means we need the entire metropolitan area, so what counties do we take from Indiana?

So what does the State of Chicago look like? 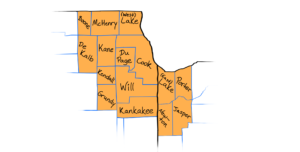 What is the financial impact of divorcing Chicago from Illinois? Let’s begin by figuring income tax amounts and go from there:

These are the counties that would make up the State of Chicago:

Now, Illinois has a flat income tax rate of 4.95% so figuring the states share of these counties is easy. For simplicity we are going to use median household income and the number of households for each county—see math above. So the state of Chicago would at this rate take in $9,776,723,008 annually.

Now taking the state of Chicago out of Illinois leaves $11,231,861,622. We can clearly see that “Downstate” does bring in more revenue than Chicago by income numbers.

But Maura what about sales tax and motor fuel tax and sin taxes?

While that is a good question the summery is: I am not an accountant or an economist and these numbers are a nightmare! Plus trying to tease them out is not—to me—easy.

Change of heart! Let’s walk on the WILD SIDE!! Alrighty, overly complicated generalizations here we go!

Sales and use taxes are lumped together in the Fiscal Year 2020 report at $15,902,689,735.66 for the state. Now if we divide that by total number of households in Illinois it becomes $3281.52 Now we can extrapolate this data into two numbers for Illinois and the state of Chicago.

Now we can quickly see that, as far as sales and use taxes, Chicago is double the rest of the stat

While this sounds HUGE, let’s consider some things that if you can tease them out of the capital budget or the line items your doing better than me.

So who comes out ahead?

So what about those other cities in the list?

This post taught me something very important: money flow through a state is convoluted and well disguised. State budgets are not like we use at home where everything has a line and is clearly delineated. At a state level everything is generalized, departmentalized, and nigh on impossible for a layman to understand as it is written in a mix of bureaucratese and political favors. There is no reason for this except to keep us commoners from understanding just where OUR money is going. Yes I said OUR because all government is supposed to do is collect tax revenue and allocate it for the good of all its citizens–the way these budgets look, we are getting the shaft and not the mine.

This is just Illinois; New York, and Los Angeles, are both WAY larger and I’m sure have way more convoluted budgets so teasing them apart would take a lot of time IF I could manage to tease them apart at all.

Overall divorcing these mega-cities from their states could be a net positive for both states and cities. Yes, we could see more Democrat senators added which would possibly alter the balance in D.C. but with more areas enacting rank choice voting that may soon be an issue of the past anyway.