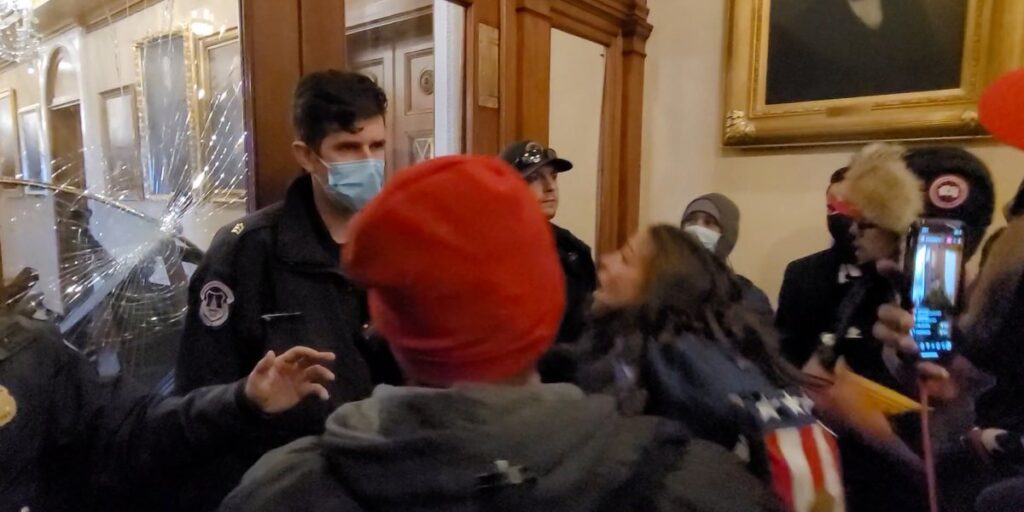 Michael Byrd, the Capitol Police officer who shot Ashli Babbitt during the January 6th riot spoke out publicly in an interview with NBC. Babbit died from her injuries and the video of the shooting has been a controversy ever since, though Byrd was cleared officially of any wrongdoing.

As rioters rampaged through the Capitol, Byrd and a few other officers of the U.S. Capitol Police set up a wall of furniture outside the doors.

“Once we barricaded the doors, we were essentially trapped where we were,” Byrd said in an exclusive interview with NBC News’ Lester Holt, speaking publicly for the first time since the riot. “There was no way to retreat. No other way to get out.

“If they get through that door, they’re into the House chamber and upon the members of Congress,” added Byrd, who gave NBC News permission to use his name after authorities had declined to release it.

Byrd’s connection to what was going on outside and inside the building was his police radio. For several minutes, it crackled with a cascade of alarming messages.

There were shouts of officers down. Screams from his colleagues under attack by rioters with chemical agents. A report that an officer’s fingertips were blown off.

“It was literally broadcast over the air,” Byrd said. “I said, ‘OK, this is getting serious.’”

Soon a horde of demonstrators arrived. Byrd, a 28-year veteran of the Capitol Police, took a defensive posture with his gun drawn as rioters smashed the glass doors.

He said he yelled repeatedly for them to get back. But the mob kept pressing forward, and then a lone rioter tried to climb through one of the doors.

What happened next was captured on video: Byrd fired one shot, striking Babbitt in the shoulder.

Babbitt, 35, an Air Force veteran and ardent supporter of former President Donald Trump, fell to the ground; she died from her injuries later.

Her death became a rallying cry for the far right, which described Babbitt as a martyr. Trump himself declared that she had been murdered and suggested, falsely, that the officer who shot her worked for a high-ranking Democrat.

For Byrd, who is Black, the incident turned his life upside down. He has been in hiding for months after he received a flood of death threats and racist attacks that started when his name leaked onto right-wing websites.

But in his interview with Holt, Byrd said he has no doubt that he made the right decision in light of the circumstances.

“I know that day I saved countless lives,” Byrd said. “I know members of Congress, as well as my fellow officers and staff, were in jeopardy and in serious danger. And that’s my job.”

Byrd said he had no idea whether the person he shot was carrying a weapon. It was only later that night that he found out that the rioter was a woman who was unarmed.

Asked why he pulled the trigger, Byrd said it was a “last resort.”

“I tried to wait as long as I could,” he told Holt. “I hoped and prayed no one tried to enter through those doors. But their failure to comply required me to take the appropriate action to save the lives of members of Congress and myself and my fellow officers.”

Byrd has been cleared of wrongdoing by the Justice Department and the Capitol Police.

The video of the Ashli Babbitt shooting incident can be seen here (WANRING: GRAPHIC)