Judge Strikes Down CDC’s Eviction Moratorium: Read It For Yourself 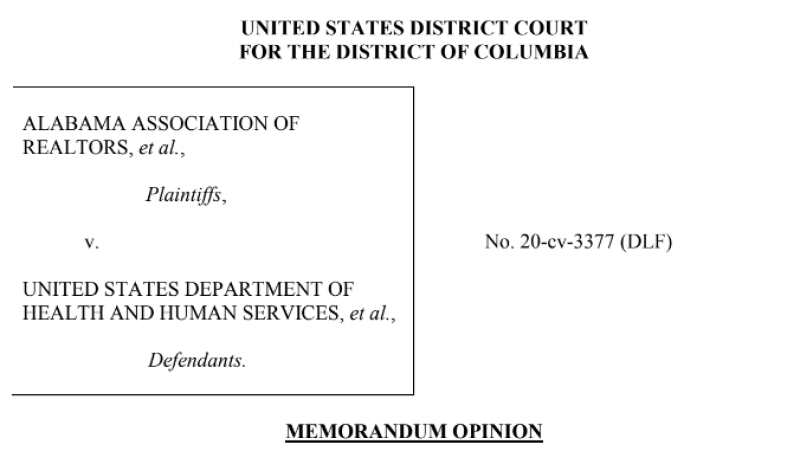 The CDC’s eviction moratortium has been been struck down by a federal judge as overreaching and beyond that department’s legal authority.

A federal judge in Washington D.C. on Wednesday ruled that the Centers for Disease Control and Prevention overstepped its legal authority by issuing a nationwide eviction moratorium, a ruling that could potentially affect millions of struggling Americans.

U.S. District Court Judge Dabney Friedrich’s 20-page order says that the protection, first put in place during the coronavirus pandemic under the Trump administration and now set to run out on June 30, goes too far.

“It is the role of the political branches, and not the courts, to assess the merits of policy measures designed to combat the spread of disease, even during a global pandemic,” the order stated. “The question for the Court is a narrow one: Does the Public Health Service Act grant the CDC the legal authority to impose a nationwide eviction moratorium? It does not.”

The Biden administration is expected to appeal the decision. The ruling also does not affect state or local eviction moratoriums. In Washington D.C., for example, the city government’s ban on all evictions remains in place.

“We’ve argued from the beginning that the CDC lacked statutory authority to impose this, and we’ve had multiple courts agree with us on that,” said Luke Wake, an attorney for the Pacific Legal Foundation who has represented landlords in similar cases. “Today’s decision again vindicates our argument.”

Housing advocates, however, argued the new ruling only throws more confusion into an already chaotic policy space. Despite the moratorium, evictions have continued due to loopholes and opposing legal interpretations. According to the Census Bureau, one out of seven renters recently reported they were behind on payments.

Following Wednesday’s decision, tenants’ rights advocates called for the Biden administration not only to defend the policy, but step up legal protections that will keep people in their homes.

“While this latest ruling is written more starkly than previous ones, it likely has equally limited application impacting only the plaintiffs who brought the case or, at most, renters in the district court’s jurisdiction,” said Diane Yentel, the president and CEO of the National Low Income Housing Coalition. “The DOJ should immediately appeal and the Biden administration should continue to vigorously defend and enforce the moratorium, at least until emergency rental assistance provided by Congress reaches the renters who need it to remain stably housed.”

Within hours of the decision, the Department of Justice indicated it would file a notice of appeal on the D.C. Circuit decision vacating the CDC moratorium and ask for a stay of decision until the appeal is decided.