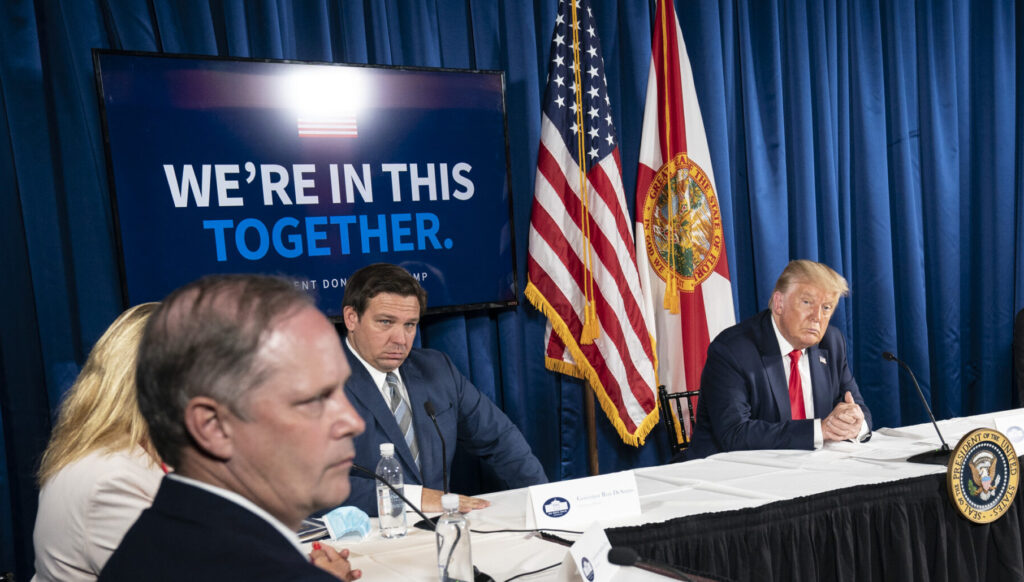 Reverberations of shock are cascading throughout the Republican world today as Donald Trump directly attacked Florida Governor Ron DeSantis. The attack, which took place at a rally in Pennsylvania, occurred two days before DeSantis faces voters in his re-election campaign.

Trump mocks DeSantis as "Ron DeSanctimonious" at a rally tonight in Pennsylvania. pic.twitter.com/efTl2vNQRB

Make no mistake, even though The Former Guy’s christening of the Florida governor as “Ron Desanctimonious” as he cited 2024 primary polling numbers was low-key, it was also a direct slap in the face. The insult was the most overt confrontation between the two in a rivalry that has been ongoing but largely hidden for at least a year. The conflict stems from DeSantis’s apparent determination to run for president in 2024 regardless of whether Trump is a candidate.

Some Republican pundits pronounced surprise and dismay at Trump’s action. National Review’s Dan McLaughlin was typical of the response when he complained, “This does nothing for the team.”

The problem here is that Republicans like McLaughlin deluded themselves into thinking that Trump was on their team when, in reality, Trump had recruited them to Team Trump. There has always been a conspicuous dividing line between MAGA and the rest of the Republican Party.

Even as MAGA grew to encompass most of the GOP, the Trumpian faction was loyal to Donald Trump personally rather than supporting the party, conservative principles, or even duty to the country and Constitution. MAGA was always quick to denounce Republican leaders such as Mitch McConnell or Paul Ryan (or of course, Liz Cheney) as RINOs if they were deemed to be insufficiently loyal to The Donald.

Yet, in the six years since Trump descended the golden escalator, The Former Guy’s reluctant defenders in the GOP have never fully understood that loyalty is a one-way street for Trump. The Republican partisans are expected to look the other way at Trump’s executive abuses and cheerfully support his favored candidates, but they also don’t get to complain when Trump stabs a rival in the back just before a big election.

With Donald Trump, it’s always about Donald Trump. When Trump picked subordinates, it was about personal loyalty (i.e., not ratting out the boss) over competency. In 2020, it was about Trump explaining away his loss rather than getting two Georgia Republicans re-elected to the Senate for the good of the party. From 2022 to 2024, it’s going to be about kneecapping other Republicans who are a threat to Trump’s ambitions to return to the White House.

This one-sided loyalty means that the Republican partisans work very hard to get MAGA candidates elected because they are Republicans after all, but MAGA is quite happy to see traditional Republicans forced out or replaced, whether it’s by MAGA challengers or Democrats. The net effect is that the party becomes smaller in some places as Republicans lose to Democrats and more MAGA in others.

The end result may well be to strengthen Trump at the expense of traditional Republicans. If well-meaning Republicans work to get people like Dr. Oz, Herschel Walker, J.D. Vance, and Blake Masters elected, it won’t be conservatives who benefit but Donald Trump. One of my big concerns is that Trump is actively replacing elected officials who refused to back his attempt to steal the election with those who will be more acquiescent in the next crisis.

Trump taking on Ron DeSantis just before Election Day may be a lot of things, but it isn’t surprising. It is true to form and in keeping with Trump’s character as we’ve seen it for years. If you are surprised that Trump is not a team player, you’ve probably bought into the whitewashing of his narcissistic behavior over the past few decades.

Some of the pundits who are clutching their pearls over the attack probably convinced themselves that this time Trump would play ball with the team even though they should have known better. It was only a few months ago that many of the same people were shocked and dismayed when Trump backed Dr. Oz in the Pennsylvania primary over much more capable and conservative candidates. Competence and ability are not qualities that Trump values.

Despite his flaws, Donald Trump is still the frontrunner for the 2024 Republican primary. DeSantis is closest but trails by more than 20 points. Unless a miracle occurs, Trump will be the nominee, and when he does, the same Republican pundits who are fretting that Trump is not a team player will line up to vote for him out of party loyalty.

As the captain said in Cool Hand Luke, “Some men you just can’t reach.”

Republicans should have united against Trump in 2016. Now it’s too late. There is no scenario in which the GOP can extricate itself from the MAGA tar baby without doing serious damage to the party.

At this point, there seem to be two options. The first is to battle with Trump for the 2024 nomination and the soul of the party. This will be an ugly battle and there is no assurance that the remaining traditional Republicans would win.

The irony is that by building Trump up and papering over his flaws for the past six years, the Republican establishment has allowed him to become the quintessential conservative fighter. They thought they could control him or that he would be grateful for their help. They were wrong on both counts.

The second option and only alternative is to simply surrender to Trump’s will and hand the party over to him. This is the course Republicans have taken since 2016, but even uniting the party under Trumpism does not assure the party of electoral victories. There is plenty of evidence that Trump and his picks are electoral poison outside of deep red states.

There is a right choice and a wrong choice, however unpalatable. The right thing to do is to confront the man who engineered a hostile takeover of the Republican Party and who tried his (not very good) best to steal the 2020 election.

The right course for both Republicans and for the country is to put an end to the MAGA domination of the party. In 2016 and again in 2020, I thought that would be done quickly, but there is a long struggle ahead and it hasn’t even begun.