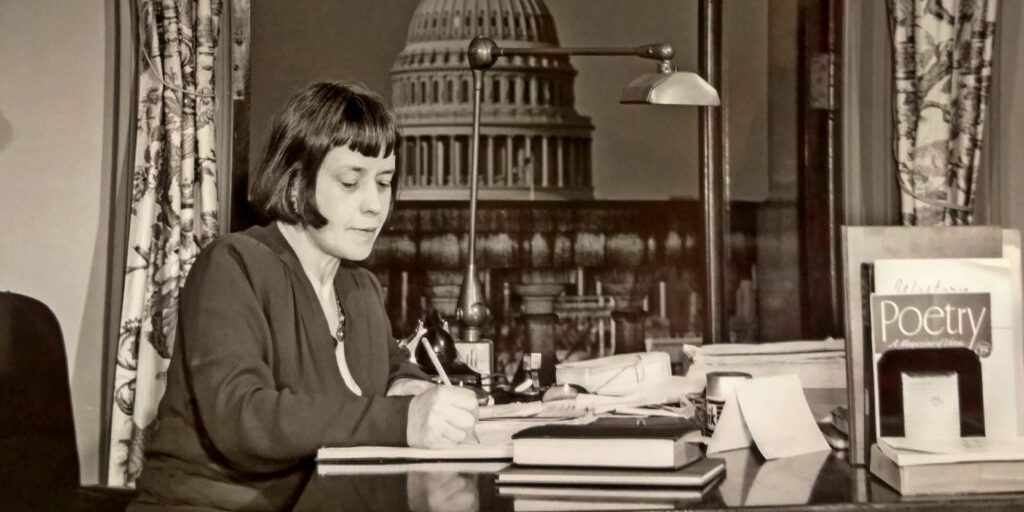 Léonie Adams, Consultant in Poetry, at her desk in the Poetry Office overlooking the Capitol Building. [public domain]

Welcome once again to POETS Day, that wonderous day where we are just fine with the idea of a semi-standardized opening paragraph and do our best to usher in the weekend, Henry Ford’s greatest creation, a few hours ahead of schedule by embracing the ethos of the day: Piss Off Early, Tomorrow’s Saturday. Disassemble, obfuscate, fudge the truth, and gleefully trespass the norms and delicate pieties that preserve our hopefully durable civilization. Nearly all means are justified by the urge to prematurely escape the bonds of employment and settle into a friendly neighborhood joint a few hours before even happy hour begins, lay comfortably in the grass at a local park trying to figure out which cloud looks most like Fetterman’s hoodie folds, go for a swim, or God forbid, go for a light jog. It’s your weekend. Do with it as you will, but in homage to the mighty acronym may I suggest setting aside a moment for a little verse? It’s a particularly good way to pass time waiting on friends who may not run as roughshod over the delicate pieties and were not as successful as you were in engineering an early exit.

Léonie Adams was the seventh Poet Laureate Consultant of Poetry to the Library of Congress which is what we called the Poet Laureate until Robert Penn Warren was appointed to the post and probably criticized the title in a new manner until he got his way and the title was shortened. That’s just speculation, but it sounds like him, doesn’t it?

Adams was also the first woman to hold the post, though that, despite the importance of a shattered ceiling, is not what endeared me to her work. What really grabbed me, besides that she demonstrated an economy that in an earlier age would have delighted type setters by being born in 1899 having died in 1988, is that Léonie Adams wrote a wonderfully structured poem about emerging into a new phase of life; a poem filled with concrete and contrasting images that originally reference childbirth and the changing of the seasons.

I mentioned Kingsley Amis a few weeks ago and C.S. Lewis last week so forgive me for referencing them again, but when I’m enjoying an author, I tend to hover about their imprint for a while before moving on. I recently read a transcript of a recorded conversation about science fiction (or as Lewis sometimes calls it, scientifiction) between Lewis, Amis, and Brain Aldiss, included in Of Other Worlds, a collection of essays and stories by Lewis. The transcript is titled “Unreal Estate” for those interested. In it, Amis bemoans the common tropes in what should be fantastic and unbound. He notes that far too many a setting is pre-written. Says Amis: “A lot of science fiction loses much of the impact it could have had by saying, ‘Well, here we are on Mars, we all know where we are, and we’re living in these pressure [I really wished he had said “pressurized” instead so I could spell it “pressurised.”] domes or whatever it is, and life is really very much like it is on Earth, except there is a certain climactic difference…’ They accept other men’s inventions rather than forge their own.”

There’s nothing wrong with non-groundbreaking references to anything, per se, it’s just that so often we find retreaded imaginings already in circulation. I’ve read plenty of prose about social or conscience emergence and while my reading choices are not ever to be considered an adequate sample size for anything short of juggling for complete klutzes, I’m not immediately coming up with a protagonist as reborn. Novelists seem to have their tropes as well: too hung up on young men coming of age by rebelling against their teachers and declaring to a cemetery that they have arrived as an artist or going off to war and saying goodbye to all that (but in a fictionalized way.) Birth and seasonal change are wonderful ways to illustrate awakening to a new world because they are just that and generally causes for celebration, but as with any image or setting or story line, in order to be reused each incarnation must show things in a new light and in today’s poem I feel that Adams has.

“Alas, Kind Element!” is written in the Miltonic Sonnet style, more or less. Traditionally the style, named for John Milton, who made it famous, employs a line break between the eighth and ninth line, which Léonie Adams does not, but she uses the a/b/b/a/a/b/b/a/c/d/e/c/d/e and the nearly requisite iambic pentameter so it’s no moving of mountains to fit this in the Miltonic category. But enough about the bones.

Per Wikipedia, Adams “was raised in an unusually strict environment,” adding “She was not allowed on the subway until she was eighteen, and even then her father accompanied her.” But I don’t think this poem is about emerging from her family’s rule. The opening word “Then” suggests that this event is of a series rather than an escape from the only way of being she had known. It’s a release from a transient sorrow; either one Léonie Adams fears will return or that another will take its place.

Léonie Adams describes herself as “sealed” away, clinging to what warmth was available to her, going through the motions of life but neither participating or observing until the seasons changed.

“This kind air breathed kindness everywhere.” Again, I don’t think so, but was that air the temporary freedom of college after her rigid homelife but before an unknown future? A love affair? Is Léonie Adams acknowledging that throughout life happiness comes and goes so this air might be one of many? I have no idea. But it is a beautiful poem.

Then I was sealed, and like the wintering tree

I stood me locked upon a summer core;

Living, had died a death, and asked no more.

And I lived then, but as enduringly,

And my heart beat, but only as to be.

I held my life as hid, at root, in store:

Thus I lived then, till this air breathed on me.

There where my times had left me I would stay.

Then I was staunch, I knew nor yes nor no;

But now the wishful leaves have thronged the air.

My every leaf leans forth upon the day;