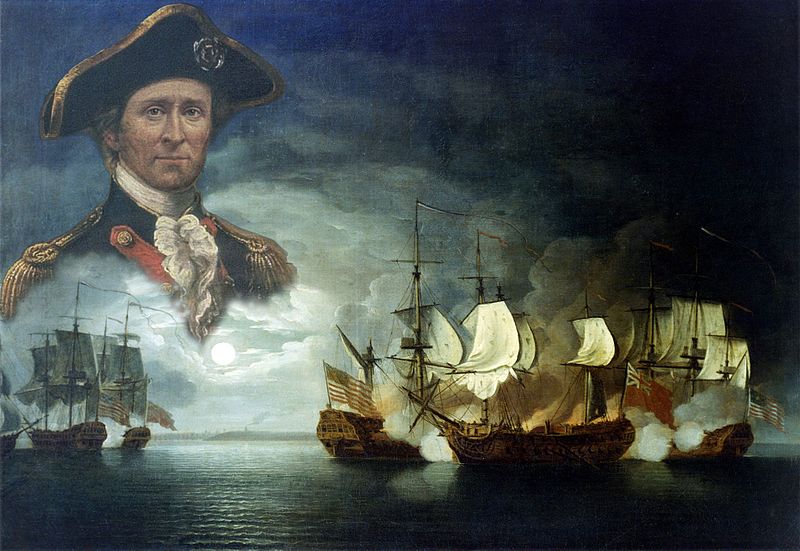 With the second amendment back in the Supreme Court, and thus a topic of national discussion, it’s high time that a persistent myth around weapons of war and our founding be dispelled.

When this great nation was founded you could literally not own a cannon.

To illustrate this fact, I’d like to tell you a story about an American hero that will likely be new to you, even though you’ll recognize his name.

That name is John. Paul. Jones.

The man, the myth, et cetera.

John Paul got in some legal trouble, so he emigrated to the U.S.A. and cleverly disguised himself by adding a second surname.

The Brits thought they had him, and when they found him they were like, “We’re looking for John Paul.”

And he’s all, “Oh, I thought you meant me for a sec, but I’m John Paul Jones. Who is a completely different person, obviously.”

And the Brits were like, “Crikey!” So, they left him alone.

So, he’s hanging in colonial America, learning to play the bass and in a band with his buddy John Bonham and the revolution starts. He really likes America and being John Paul Jones, so he thinks to himself, “How can I, John Paul Jones, contribute to the birth of this great nation?”

But anyway, he goes to George Washington and he’s like, “Yo, George. How can I help?”

And George goes, “Would you like to join the Continental Army?”

And John Paul Jones is like, “I don’t think that really matches my skill set. I was a sea captain when I lived in Scotland. I mean, I was officially domiciled in Scotland but living at sea as a captain. It’s complicated.”

So, John is chilling at home, and he goes to the mailbox and there are these two letters. One is for Marque and the other is for Reprisal. John Paul Jones goes, “Dude, I am going to get all up in the grill of British merchant shipping in the English Channel.”

So, he goes to Congress and he’s like, “I’ve bought a ship. Can I get some cannons?”

And they’re all, “Dude. You literally cannot own a cannon as a private citizen. Like, that’s literally not a thing. Only the government, you know, the army, can own cannons.”

Now, remember, John Paul Jones really loves America and being John Paul Jones and he doesn’t want to get in any more legal trouble, so he says, “That’s cool. This nascent nation is civilized, so obviously people can’t own weapons of war. You can’t just have random people walking around with tanks and howitzers and stuff. I’ll figure this shit out. I’m John Paul Freaking Jones.”

So, John Paul Jones is in the English Channel messing with British merchant shipping. What he does is ram their ships. And he saw this thing from, like, the Punic Wars or something, where the ramming ship would attach itself to the target with this long arm with a spike on the end. And then his men would board the merchant ship. Obviously, his men don’t have cannons or guns, so they basically are attacking the merchants while wearing a pot on their head Johnny Appleseed-style and wielding dull plastic sporks. When your spork broke you used your pot hat as a weapon.

Now, this was a fair fight, because the U.K. had common-sense gun laws even back then and they weren’t even allowed to bring knives on board.

So, John Paul Jones and his men are a real thorn in the side of the British. So, they send some ships from the British navy back from supporting the war in the colonies to deal with him. He has some narrow escapes, because obviously they can legally have cannons and he can’t, but eventually he manages to take a British warship.

Now his men were all, “Let’s take the cannons and use them. They’re right here for the taking!”

But John Paul goes, “Guys, you know it’s not legal to own a cannon in the U.S. of A. If we take these cannons, we’re literally breaking the literal laws of the United States.”

If you know anything about sailors, you know that they are total rule followers, so his men were like, “You’re right, John Paul Jones. We’ll stick to pots and sporks.”

But this whole incident gets John Paul thinking, “What if there were a way I could legally own a cannon? Or at least have one to use?”

So, he’s racking his brain and one day he’s in his cabin talking with his particular friend and he’s like, “I got it! I’ve figured it out!”

And his friend goes, “What are you talking about?”

John Paul Jones goes, “The British have an army, right?”

And John Paul goes, “And we have an army.”

So, John Paul Jones goes to the several states in Congreſs Aſſembled and says, “Hey, we should have a navy.”

And American hero George Washington is all, “Why didn’t I think of that?”

And that’s how John Paul Jones founded the United States Navy and got to sail in ships with cannons which were legal, because they were weapons of war owned by the United States government because, obviously, you couldn’t legally own a cannon.