I remember once walking down the four-block shopping district that makes up the “gentrified” section of Hamilton, Ontario, a few years before the pandemic and a sardonic thought going through my head as I watched a battalion of police grilling a homeless man in front of a hip college coffee shop for suffering in public (to the relative disinterest of the kids): well, they have safe spaces in their colleges; naturally, they’d expect the cities to be made into safe spaces!

Which is unfair, I know. Horribly unfair. After all, it’s not just young people who are insufferably bland, boring, and bougie at this point. It’s nearly everyone you encounter in urban areas. The suburbanization of the cities is completed and what Ballard called the “suburbanization of the soul” is nearly done. Social media is essentially a small-town gossip network, mass media is as pleasingly stultifying as it ever was, cities are “managed experiences,” and even fascism is obsequious now, eager to swaddle you and protect you from all the things you’d rather not think about.

Look, I know I’m “preaching to the choir” here, but really we’re all trying to locate the choir first. Have you seen them? Does any of this make sense? Is anybody out there? Because I think we all do see it. My girlfriend — who is not at all an angry crank like me — calls it “the monoculture.” Writers in the Times ask why everything’s “boring” now. I tend to think of it as a sort of greyness that has settled over everything. At the very least, I really don’t want to hear anymore about how conformist the 1950s were! 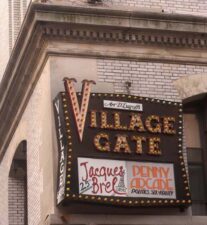 Sign for the Village Gate at Thompson and Bleeker, 2006.

But don’t take it from me. If anyone has earned the right to testify to the choir at this point, it’s Miss Penny Arcade. Born Susana Carmen Ventura to a working class immigrant family in Connecticut, she first ran away at age 13, spent two years at the Sacred Heart Academy for Wayward Girls as a result, and still made her way to New York as soon as she could. It was the late 60s and kids still went there looking to expand their range of experiences and find danger and excitement. By 1968, she was appearing in underground films and performing at La MaMa with Jackie Curtis and Jayne County and hanging out at Max’s Kansas City. If raconteur was taken more seriously as a profession, she’d be considered “highly qualified” by this point!

Penny Arcade learned from the best and has inspired many others. Here she is, for instance, with her late friend Quentin Crisp, one of the greatest talkers of the century:

We saw her paying tribute last month to another great storyteller Edgar Oliver.

And last night, we finally got to see Penny Arcade perform her long-running monologue-performance storytelling piece Longing Lasts Longer in the Pangea Café. She has a new memoir and performance in the works and nearly ready to go, and has performed this one since 2015. But you get the feeling with a lot of great raconteurs that it’s all part of one epic story- Nerval talked about the one continuous scroll of all his writings- that is their life.

Yes, a somewhat shallow reading of Longing Lasts Longer would hold that she’s covering that old tune “New York is a shadow of its former self.” The New York Times wasn’t too patronizing in their interpretation:

Ms. Arcade, who created the show with her longtime collaborator, Steve Zehentner, is hardly the first to note that many of the gritty streets of the city have become sleek alleyways lined by expensive boutiques, chain stores and more Citibank branches than an entire continent should need. But her funny, hectoring tone and her perky mien — she breaks into occasional bouts of funky dance now and then — bring a lively new perspective to an oft-heard plaint. 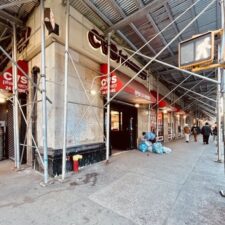 But, a shallow reading would hold that Proust was only dishing about some interesting dinner parties he’d once attended! On the one hand, Penny Arcade is recalling a lost world that is, frankly, worth remembering in a way this one never will be. As I’ve said before, this neighborhood is where the Renaissance happened not so long ago, for me anyway. It also helps that she’s really funny.

And, for the record, Penny Arcade is pretty clear that all the “lost decades” she’s seen pretty much sucked too, in their own way. Spending the 6os in your 20s, the 70s surrounded by polyester, the 80s watching your friends die of AIDs, etc. is nothing to romanticize. Really, she’s talking about a way of being in the world that seems to have almost vanished. Not being “successful,” mind you, but actually being in the world up to the hilt. It’s been the great theme of pretty much every artist worth their salt, for whom their life was their work, for at least the last three centuries. Artists have long sought to throw themselves into the maelstrom of living at its messiest and come out with a few fresh insights (Before they sought to get into a good graduate program I mean.) and Penny has.

“Life ain’t for sissies,” as Destroy All Monsters once said. It’s nothing to hide from either. But what else are we doing at this point behind all these tiny little screens?

And so, what are YOU doing, creating, pondering, playing, watching, reading, or experiencing this weekend?