I always thought that “quarters” was the dumbest drinking game ever. I mean, even in the 90’s I knew “that can’t be hygenic”. But, you know, you do the thing where you drop the quarter against the table and try to get it into the glass anyway. And there were the people who were good at it and the people who absolutely were not. But it’s not like the point of quarters was to win. Was it? I can’t remember. It’s all fuzzy.

Well, if you remember quarters somewhat fondly but wish you could play it with a fantasy dungeon crawl theme and without the beer, well, I have good news.

Dungeon Fighter (Second Edition) is back in print!

Okay, here’s the setup: Dungeon Fighter is a co-operative board game where you are a team of intrepid adventurers doing a dungeon crawl and you fight against monsters by bouncing dice against the table and having the dice land on the board. The dice do the amount of damage based on where you land and your heroes can get bonuses based on whether one of the special dice faces comes up (you’ve got a 50% chance on your RGB dice and a 16.6% chance on your white dice). 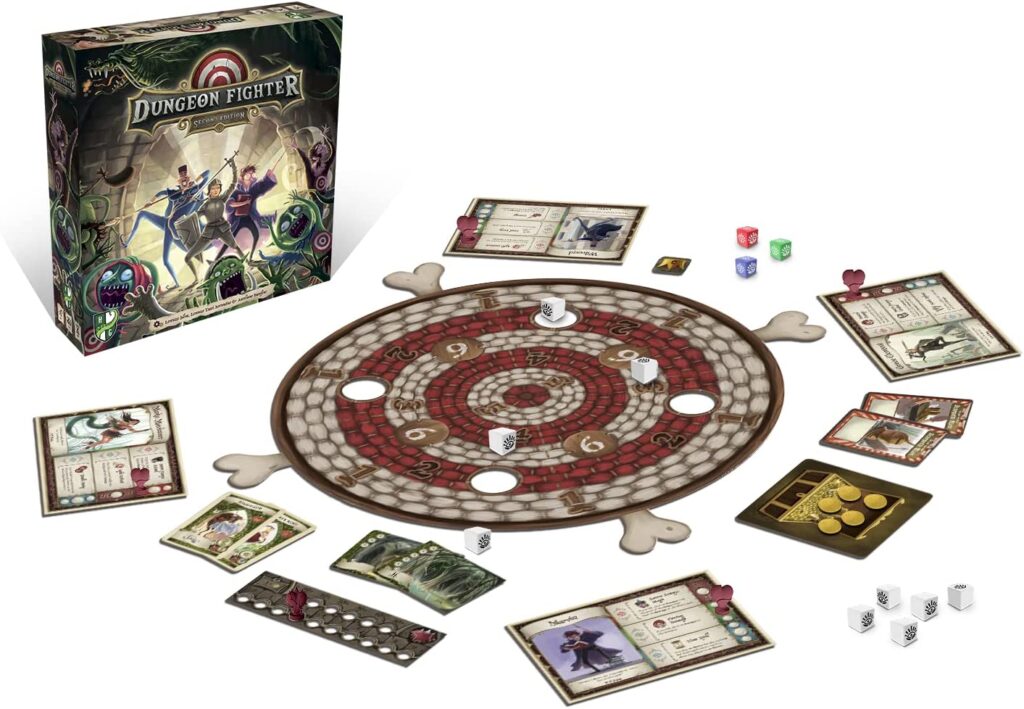 Start with three dice: Red, Green, and Blue. Pick one. Toss it in such a way that it bounces off of the table and lands on the board. If the die does not finish up on the board, that’s a miss. Take some damage. If the die lands on the board, check to see how much damage it did and then remove the die you threw from the turn. Pass the remaining dice to the player on your left. It’s their turn to toss now. Then repeat if necessary and have the third player throw the last of the RGB dice and, if you’re lucky, the monster is dead. If you’re not lucky, you have a choice to make: use one of your dwindling supply of white dice or have everybody at the table take a hit from the monster and refresh your RGB dice.

Then do it again.

There’s a mechanic where you pick a couple of potential rooms from the deck, choose one of them, and fight the monster within. The room is worth between 2 and 4 points and if you reach 10 points, you go to the market where you can use your accumulated gold to buy weapons, shields, or potions.

Some of the weapons you get will give you bonuses for such things as well. A helmet that has you close your eyes for +2 damage. A spear that makes you toss from the edge of the table for +2 damage. That sort of thing.

Then draw your next room from the deck. Go to the market three times and then FIGHT THE BOSS MONSTER.

But you know what? WE HAD A BLAST. This game was so silly and goofy that it didn’t matter. We all laughed louder than we had in a long while playing a silly game and this game is exceptionally silly… but fun. Appropriate for kids, appropriate for grownups, and you’ll find yourselves laughing at the inability of all your buddies when it comes to something as silly as getting a die to land on a little cardboard playing field.

Seriously, if you have a gaming group that won’t mind a little levity, you must pick up Dungeon Fighter. It’s an absolute blast.

(Featured image is the contents of the box, photo lifted from Amazon’s page.)