The Caterwauling of The Rings of Power 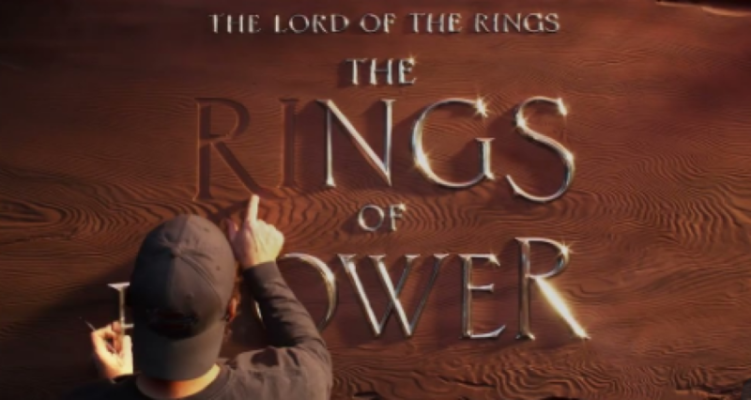 Screen grab of The Lord of the Rings: The Rings of Power Title Sequence being created. Full video here: https://www.youtube.com/watch?v=gGdKvB0CCbY

This discussion of The Rings of Power is spoiler free

Look it, I’m guilty of such things, too.

For having spent the better part of a billion dollars on it, Amazon sure did have a five-cent marketing campaign rolling out The Lord Of The Rings: The Rings of Power. The trailers were not inspiring, the screen shots where great but nothing we haven’t seen 30 years into the CGI revolution, and the behind-the-scenes legal noise of just how much Tolkien was going to be involved in this latest iteration of Tolkien due to a rights dispute didn’t help. With Amazon was spending unheard amounts of money on the project, with unproven show leadership at that, with a steady dose of anti-Amazon/Bezos media resentment mixed in, the overall social and news media environment wasn’t doing the project any favors either. Then there was the general public, who of course get to weigh in on something none of them had yet seen because that’s just how it is now. That reaction ranged from the honest criticisms and concerns to the usually trolling suspects trying to review-bomb and culture war the project, something that seems to occur with just about every major franchise release these days.

Full disclosure: I’m one of those who on social media thinking this was going to suck out loud and be a disaster. The former based on the aforementioned unflattering roll-out, the latter based on whether or not that billion dollar investment in The Rings of Power was going to get Amazon anything close to a return, let alone a profit.

So, let start cutting through the noise here.

The first two episodes are now out. I watched them. And then I… waited to write or comment on it. I percolated on it. Meditated on it. Thought it through a spell. There is so much going on around this series that doesn’t have anything to do with the actual series that the only path forward was to sit, wait, let the storm pass a bit, then venture out and see what the damage was. Starting with what I myself am responsible for here, I tweeted that The Rings of Power would suck. I was wrong; it doesn’t suck. It’s not great, and with a reported 50 episodes bought and paid for already maybe it develops, but it doesn’t suck, and…

You know what, thing is you can’t even go into a review of the actual show itself without dealing with all the noise surrounding it. So let us do that first.

The online review bombs and howling over “authenticity” to Tolkien and the diversity of the cast dominated social media in the run up. The former is subjective, and for the most part not a little bit hypocritical; Jackson wasn’t faithful, Amazon isn’t going to be faithful, and – as George RR Martin found out – if Tolkien himself were writing the script some nerdtrolls online would be raging just as loud how J.R.R doesn’t get the “real” Lord of the Rings in our current age of amplified online stupidity. The latter is much more of a symptom of a societal issues. For those slapping the current outrage du jour of “wokeness” onto anything and everything that does not meet their approval or dares to openly discuss diversity in a way that ruffles priors, that’s a you problem, not a The Rings of Power problem. Watching it is entirely voluntary, as is commenting on social media for the seal claps of your ingroup. As is promoting whatever else agenda over and above whether it is an entertaining and engaging series without having seen, watched, or considered it beyond what someone else said on the interwebs.

This isn’t even a new discussion. Way back in 2010 at Ordinary Times Erik Kain dealt with this very subject:

A couple of thoughts here. First of all, Tolkien’s work treads the line between historical fiction and fantasy to some degree; he’s not wholly inventing a new world, after all. He’s drawing real parallels to our own world. It is an analogous work far more than many other epic fantasies.

Second, Tolkien’s world is self-contained rather than open-ended fantasy. It is comprised of a single mythological framework. This is in stark contrast to the work of C.S. Lewis, whose fantasy dips into all sorts of mythological pots. Lewis’s fantasy is motley – Narnia is not an extended metaphor for Great Britain; and while Tolkien is doing battle with the notion of modernity and industrialization, Lewis is far more interested in using fantasy to talk about theology and salvation. Many other fantasy writers are just world-building, spinning tales. Some have very self-contained worlds, wherein racial and historical consistency is important to the work as a whole (think George R. R. Martin’s books – the various regions produce various skin-tones, much like our own world), and some don’t (the Discworld books).

In other words, casting black dwarves or Asian centaurs in the motley and utterly fantastical stories of C.S. Lewis would make perfect sense; casting black Hobbits in Middle-Earth would put a ripple in an otherwise coherent and self-contained world. It might not make that big of a difference to movie-goers, true. But the makers of those films are trying to remain true to Tolkien’s vision, and this seems like a reasonable, and certainly not racist way of doing that. If they did cast some darker skinned Hobbits, I seriously doubt anyone would care or even think twice. There are more important ways to remain true to the story. Like not changing huge chunks of it to make it more of a romance, and not cutting out the ending in order to have fifteen farewell sequences in a row. (Yes, I am still bitter about The Return of the King and its bizarre and senseless finale which cut out the entire Hobbit rebellion against Saruman. Damn you Peter Jackson!!!)

Well, now they have darker skinned Hobbits, and it was the usual suspects online who care and think way more than twice about it and made noise. Frankly, folks getting in a twist because the made-up characters of an early 20th century writer aren’t lily white and speaking the Queen’s English as the author in his day did tells us way more about them than it does the show runners.

As to the actual program, The Rings of Power, the first two episodes offer both promise and concern. The term that kept coming to mind is it is dense, not always in a bad way, but in an ever-present way. Visually the series looks like they spent gobs of money on it, which it should since Amazon did. The acting and casting of the characters so far introduced seem to fit and are carried well. All the trappings and trimmings are there to world build. But even understanding that there is world building to be done, The Rings of Power is taking an awful lot of runway to get this saga airborne. Dense things take a while to get moving, but there are a few concerning things here. There is an undercurrent of striving for epic, baked into the cake of making a Lord of the Rings branded endeavor, but it doesn’t always serve this show well. All those lush visuals, all that background story, all that nomenclature, all that world building often starts to come off more staccato than the rise and fall rhythm a long form series is going to need. The dialogue especially shows signs of over-earnest bordering on overwrought. The show runners would be wise to let the story breath a bit more, not need every spoken line to be epic, not every glance layered in multiple meanings, not every reference that is written to be super-in-the-know-awesome but ignored by the folks who don’t really want to Google just what in the hell are they talking about.

The Rings of Power doesn’t suck at the start; that I was wrong about. Is it going to be a disaster as I also feared? It isn’t right now, there is potential here, but the criteria for success here isn’t being a good show. The Rings of Power, for that price tag and with the expectations of Amazon openly declaring it to be their “watercooler” show, doesn’t have the option of being good. It HAS to be great, and epically so, or it will be viewed as a failure regardless how good it is by all normal standards.

The Rings of Power open with the story arc of one of the main characters fruitlessly searching until companions refuse to follow what they perceive as a Middle Earth Ahab after the white whale any further. Whether that is a coming metaphor for the audience and Amazon’s version of Tolkien will play out over the next few episodes, but the question is a fair one. Seeking the white whale and indulging in the chase is one thing. Now that Amazon has found it, will they get their mass media moment of glory, or will they be swamped and destroyed by the behemoth they for so long sought, futile stabbing with expensive elven blades all the way down?

Tags: the rings of power