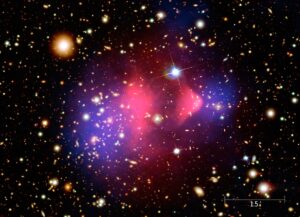 The Bullet Cluster, the “smoking gun” for Dark Matter. The red shows where the visible matter is. The blue shows where gravity is coming from.

[ThTh1] The headline is startling: it claims that the new JWST data proves that the Big Bang Never Happened. But is it true? Has JWST disproven the Big Bang?

The piece is by Eric Lerner, who is not an astronomer but a researcher in plasma physics. Lerner has spent the last 30 years claiming that the Big Bang never happened (it’s the title of his 1991 book) in favor of plasma cosmology.

I won’t pretend to understand plasma cosmology in fine detail, but the basic idea was to explain a still outstanding problem in cosmology — why is there more matter than anti-matter in the universe? They should, in principle, be balanced. Plasma cosmology postulated that the universe had both matter and antimatter and was presented as an alternative to the expanding universe model. However, by the 1990’s, it was becoming clear that plasma cosmology had problems explaining the observational data and interest in it faded. Lerner has continued to tout it, however, and is now claiming that the new JWST results show that the Big Bang is wrong and vindicate his adherence to this theory.

The TL;DR version here is that Lerner still can not adequately explain the primary evidence in favor of the Big Bang, is misquoting both the JWST results and the scientists involved and has yet to present an alternative cosmology that works.

Lerner’s claims are based on very early JWST data. Astronomers are getting their first look at some of the earliest galaxies in the Universe. In order to know where those galaxies are in the in the cosmos, they have to estimate their distances based on the presence or absence of those galaxies in JWST’s filters. However, JWST is still being calibrated and we know that, as a result, some of these distances have been significantly overestimated. What this means is that some galaxies we thought we were seeing as they were 13 billion years ago are actually being seen as they were 10 billion years ago. That is a huge difference, going from “cosmic dawn”, when galaxies were first forming, to “cosmic noon”, when galaxies were at their most active.

Moreover, none of these discoveries are inconsistent with the Big Bang. Even taken at face value, they show that galaxies may have grown and evolved much more rapidly than we thought. And, as a reminder, figuring out how galaxies evolved in the early universe is why we built JWST in the first place.

A perfect illustration of this is that Lerner quotes Kansas Astronomer Dr. Alison Kirkpatrick as saying, “Right now I find myself lying awake at three in the morning and wondering if everything I’ve done is wrong.” The implication is that she’s talking about the Big Bang. The reality, if you look at the actual Nature article that the quote comes from, is that she’s talking about galaxy evolution models which, again, is precisely what JWST was designed to test.1 Astronomers I’ve spoken to have said that, even if these preliminary results are born out, there is nothing wrong that can’t be fixed by adjusting the initial mass functions or the speed at which central black holes grow or other known factors.

Fundamentally, the proof of the Big Bang is that it predicts a universe that evolves and changes with time. When we look at the distant universe, we see it as it was when the light was emitted. And so we should a universe that is different from our current universe. That is what we see: galaxies are smaller, black holes are more active, clusters are still forming and, ultimately, we can see the glow from 380,000 years after the Big Bang when the universe’s density had dropped enough for light to flow.

Going even further, the Big Bang Theory rests on seven pillars of evidence. Those pillars are: 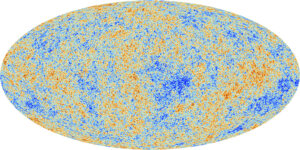 The Universe’s baby picture: the microwave light from 13.7 billion years ago. Those lumps will eventually become galaxies.

That’s a pretty hefty trove of evidence based, not on one result, but on hundreds. It is the fusion of many many wildly different strains of investigation. It’s not perfect — there is a growing tension in the Hubble Constant and we still have no idea what Dark Energy is. But if the Big Bang and any alternative theory played basketball, it would be like the Harlem Globetrotters playing my junior year physics intramural team.

Now what about the alternative? In order to reject the theory of the Big Bang in favor of plasma cosmology, it’s not enough to accept one fringe theory. You have to accept a ziggurat of fringe theories. You have to assume that our understanding of almost everything is not only wrong, but fundamentally broken. Just a few examples:

I feel like I’m using a 2x4 to swat flies here — Lerner is a pushing theory that very few people accept on an obscure website. But his article is being touted by a lot of people and is finding its way into mainstream sources. My point here is not to “get” Lerner, it’s to show that the Big Bang Theory is supported by a gigantic weight of evidence. That it has been challenged on numerous occasions and those challenges have been found wanting. That alternative theories are numerous and continually run aground on observational evidence.

(Lerner’s article is being touted by a bunch of religious folks who think the Big Bang theory contradicts Genesis. This is ironic, because plasma cosmology was first designed by Alfven because he felt the Big Bang Theory had a whiff of creationism about it.)

The preliminary JWST results are very exciting and may, if confirmed, show that our models of how galaxies grow and evolve in the early universe have big, but fixable, problems. But nothing in the data even hints that Big Bang Theory is wrong. In fact, if you look at this issue from a few miles up, what do you see? An early universe that is shifted far into the red, that has galaxies very different from later eras and that is challenging — as all new data does — some of what we think we know. That’s not science failing. That’s science working. 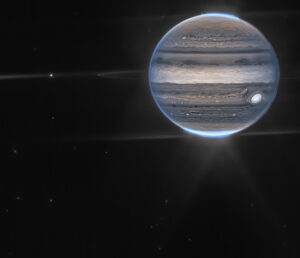 With giant storms, powerful winds, auroras, and extreme temperature and pressure conditions, Jupiter has a lot going on. Now, the NASA/ESA/CSA James Webb Space Telescope has captured new images of the planet. Webb’s Jupiter observations will give scientists even more clues to Jupiter’s inner life. In this wide-field view, Webb sees Jupiter with its faint rings, which are a million times fainter than the planet, and two tiny moons called Amalthea and Adrastea. The fuzzy spots in the lower background are likely galaxies “photobombing” this Jovian view.   This is a composite image from Webb’s NIRCam instrument (two filters) and was acquired on 27 July 2022.

[ThTh3] While I’m ranting and raving, the CDC has recently changed their COVID guidelines to be generally less strict. This does not mean that the COVID deniers were right. What it means is that the guidelines we had at the beginning of the pandemic were based on a population that was immunologically naive — had never been exposed to COVID-19. Now, almost everyone has either had the illness or been vaccinated, so we all have some level of resistance. Not enough — it is still killing hundreds of Americans every day. But enough that the balance over what is safe and what isn’t has changed.

Fundamentally, though, we’re still in the same place. Get vaxxed. Get boosted. If you’re exposed, wear a mask. If you’re sick, isolate.

[ThTh4] And still on COVID, maybe it’s my imagination, but the anti-vax talking points keep getting dumber and dumber. A couple of weeks ago, the internet lit up with a claim that the vaccine caused miscarriage rates of 44%. It wasn’t true, as a simple check of the tables would have revealed. Or a check of the increased birth rate after the vaccines went live. Or a simple check into Naomi Wolf’s past, which has included incredibly dubious and mathematically challenged claims. They’ve also been making claims that the vaccine has killed hundreds of thousands (it hasn’t) and that Paxlovid is poison (it’s not).

I try to treat most people whose views differ from mine with respect. I don’t always succeed but it’s something I try to keep in mind. But anti-vaxxers … I won’t. This movement is pure luddite trash that revels in increased human suffering and death. I guess we should just be glad that burning witches has gone out of fashion.

[ThTh5] Why do astronomers keep producing sounds of the universe that sound like tortured souls? It’s what we do best.

The misconception that there is no sound in space originates because most space is a ~vacuum, providing no way for sound waves to travel. A galaxy cluster has so much gas that we've picked up actual sound. Here it's amplified, and mixed with other data, to hear a black hole! pic.twitter.com/RobcZs7F9e

[ThTh6] Digging into an astronomical mystery.

[ThTh7] I once saw Shock Diamonds open for Slayer.

Astronomers have discovered one of the biggest black hole jets in the sky. Spanning more than a million light years from end to end, the jet shoots away from a black hole at almost the speed of light showing shock diamonds analogous to jet engines https://t.co/t1iJ2ZsGQl pic.twitter.com/G1Et6tUv2Y

[ThTh8] So you don’t believe an asteroid killed the dinosaurs, huh? Would you believe two?

[ThTh9] A lot of truth here

Why your PhD advisor can solve your problem so "easily" #AcademicChatter #Sketchnote pic.twitter.com/HDMhGdASlc

[ThTh10] Some new nuclear fusions results are confirmed although they are having trouble recreating the conditions of the experiment.

[ThTh11] Betelgeuse belched out a gigantic amount of material three years ago. But it’s feeling much better now.

[ThTh13] The idea of teaching a waves class terrifies me. But this is a great demonstration. Just need a pool in the classroom.

A perfect standing wave on a computer controlled wave pool used for research in university pic.twitter.com/dYkCydIzk6

[ThTh14] One of my pet peeves is people comparing health data from the United States to other countries without accounting for difference in how those outcomes are measured. Here’s a thread showing that no, Virginia, we do not have the same maternal mortality rate as Syria.

[ThTh15] While I supported COVID mitigations, there will be a price to pay. It’s especially bad in this case because it’s not clear that these mitigations — masking children in schools — helped a great deal. However, it’s also not clear that these setbacks are permanent. I have said to my colleagues that we’re going to be feeling the educational fallout of the pandemic for a decade. And I think a fallout would have happened without remote schooling or masking, just in a different form. I have yet to see anything to cause me to reconsider that opinion.