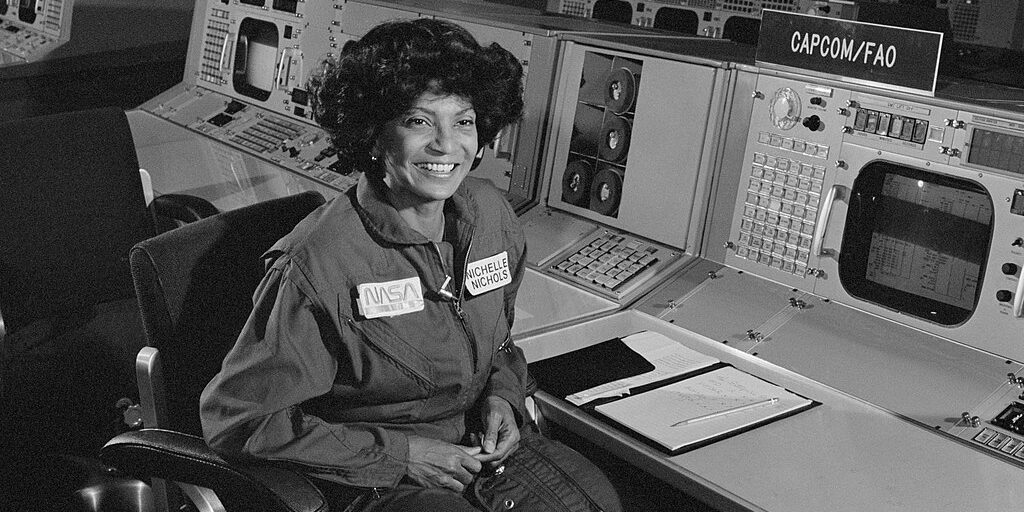 Nichelle Nichols in 1977 at NASA, Public domain, via Wikimedia Commons

[ThTh1] As you may have heard, Nichelle Nichols recently died:

Nichelle Nichols, the woman who brought Uhura to life, died last week at the age of 89. Her contribution to the collective imagination of America — whether on the television screen or in her real life — cannot be overstated.

With not a hair out of place and fabulous earrings dangling, she was Communications Officer, fourth in command of the Federation starship U.S.S. Enterprise in the 23rd century.

She was the embodiment of a declaration splashed across billboards decades later: There Are Black People in the Future.

When “Star Trek” debuted on NBC in September 1966, Uhura’s very presence hit the audience like a thunderbolt. At the time, Black people were in a very literal and ultimately existential fight for autonomy of their bodies and souls. It was the era of marches, freedom rides and sit-ins. Malcolm X was already dead. The Rev. Dr. Martin Luther King Jr. was still preaching.

Black people of all abilities and professions were still being relegated to the corners of restaurants, hotels and offices. Black women, if ever mentioned in the larger media, were portrayed as either loud, undignified troublemakers or genial, overweight maids and nannies who supposedly delighted in doting on white folk’s children.

Out of this madness, Uhura appeared.

A vision in red and black. Beautiful, smart as hell and not interested in nobody’s nonsense.

Her name means freedom in Swahili. And for a generation, she symbolized that: the freedom to be seen and appreciated for your talents, rather than being seen as a liability because of your color.

It’s difficult for a modern audience to grasp how revolutionary the character of Uhura was. It wasn’t just that she was black. It was that she was a valued crew member, the equal of her fellow officers, competent, smart, brave and reliable. And she would hold her own in repartee — Nichols famously ad-libbed a somewhat risque “Sorry, neither!” response to a drunken Sulu calling her “fair maiden”. One of my favorite moments is in “The Naked Time” when Riley becomes infected with the virus. Spock doesn’t hesitate to have Uhura relieve him at navigation, placing the entire crew’s fate in the hands of a black woman so quickly, it was barely noticed (and simultaneously demonstrating that the bridge crew had to be competent at every station).

According to Nichols, she almost quit the show because of dissatisfaction with the character’s development but was talked out of it by no less than Martin Luther King, Jr. Her continued presence in the show led to television’s first interracial kiss in Season 3, a moment that drew many complaints from racists around the country.1

After Star Trek, Nichols became an advocate for inclusiveness in STEM. She spent nearly 40 years advocating for and recruiting minorities into NASA. She had an asteroid named after her, had novels dedicated to her and became beloved by Trek fans. A few years ago, there were disputes over the management of her affairs after she was diagnosed with dementia and Trek fans rallied to her side. I personally know people who cite her an inspiration for getting into science. Those who knew her have been penning tributes to her warmth, generosity, humor and character.

Of the original Star Trek crew, only Shatner, Koenig and Takei are left. The show has had a kind of anti-curse thing going, where the cast has lived to ripe old ages. All of the cast except Kelley and Barrett lived to be in their 80s. The average age at which we’ve lost them is 83. Shatner is 91 and just went into space. Koenig and Takei are both 85 and still kicking.

I try not to admire celebrities too much since they tend to disappoint. But she was one of the few who never did. She inhabited a character who made television history, used her fame to advocate for others and lived a long life, respected and admired by almost everyone around her. Ad Astra, Ms. Nichols. You will be missed.

It seem we may have encountered that problem again. Pulse-ox tech — that little thingy they put on your finger to measure your blood oxygen — may be overestimating oxygen saturation in black people. There is hopefully a technological fix that will make this work better.

[ThTh2] Some of the drone footage of volcanos is simply amazing:

Fascinating drone footage looking down into a volcanic eruption from above.

[ThTh3] And so is the ocean. I thought this must be CG the first time I saw it.

A spectacular sight 1225m (4019 ft) beneath the waves off Baja California as EVNautilus encounter the amazing Halitrephes maasi jelly. pic.twitter.com/lKK2yClgAu

[ThTh4] So the headline says that a new discovery has made the Loch Ness Monster “more plausible”. Has it?

Uh, no. One of the “theories” for Nessie is that it is a plesiosaur that … somehow survived 65 million years after the clade was wiped out by an asteroid? I dunno. Anyway, the new study is actually quite interesting. It presents evidence that plesiosaurs may have inhabited bodies of fresh water. Until now, it was thought they only thrived in salt water environments. This removes one of the arguments why Nessie could not be a plesiosaur. But it does so in the same sense that proving marsupials sometimes eat meat makes it more likely that I am a kangaroo. You still have a body of water that doesn’t anywhere close to enough biomass to support a plesiosaur-like creature. You still have the problem that the only images of the creature have been proven frauds. And you still have the problem that decades of searching have turned up bupkis.

There is no Nessie. Just a deep dark Scottish lake and boredom.

[ThTh5] You may have heard that JWST has discovered the most distant galaxies yet known. Not quite. The galaxies are candidates, with their distances based on photometric redshift. As the universe expands, distant objects have their light stretched out before it reaches us. The further the object, the more the light is stretched and the redder the light gets. What these papers are finding is that there are galaxies in the new JWST deep fields whose light is so stretched they literally can’t be seen in some infrared bands. This provides a reasonable estimate of how far away they are. But it’s just an estimate. Until you put a big telescope on them and get a spectrum to confirm that redshift, it’s still an estimate.

Still, the sheer number of these candidates popping up is incredible. And if they are confirmed, JWST is already flipping over the tables in our understanding of how the first galaxies formed, a key part of its mission.

[ThTh6] Speaking of Webb, what’s it up to? Oh nothing much. Just producing stunning images of the Cartwheel galaxy.

This new @NASAWebb near and mid-infrared composite image highlights the Cartwheel Galaxy, the result of a high-speed collision that occurred about 440 million years ago, along with two neighboring galaxies. Get the details: https://t.co/c8lEVBBlub pic.twitter.com/eVe8m0k6N7

[ThTh7] Did a study just prove that antidepressants don’t work? Not really.

[ThTh8] A great update on the state of COVID. Yes, the virus is still with us. The vaccines have made it far less deadly but it’s still killed 2000 people just within the last week. There is, however, hope that the next generation of vaccines — nasal vaccines and possible variant-proof vaccines — will bring us even great success. In the meantime … get boosted. It helps. A lot.

[ThTh9] If you want a hint of just how vast the universe is and how tiny a portion every JWST image brings to use, here you go:

It's mind blowing to consider how such a massive object can be such a miniscule fraction of the universe. 💙 pic.twitter.com/VODgcUOmUl

[ThTh10] Did NASA warn astronauts not to, uh, bounce the tribble in space? Of course not. It was a joke. That being said, you have to maintain control of fluids in freefall.

[ThTh11] A key study in Alzheimer’s research was likely faked. Does this mean billions were wasted? Our friend Dr. Ryan Townley pointed me to this thread, which discusses the implications in a more circumspect way.

[ThTh12] In one of the most “who could have foreseen this?” moves ever, Germany is reconsidering it’s terrible decisions on nuclear power.

[ThTh14] FRBs get curiouser and curiouser.

[ThTh15] A fascinating post about living on Mars time. I actually think my body is on Mars time. When I was finishing my dissertation, I would work until I was tired, go home, sleep and then come back in. I discovered my “day” was shifting about 1 or 2 hours every Earth day.

[ThTh16] A great long post about how we can fight climate change without plunging everyone into poverty. Technology got us into this mess. Technology will get us out.

The Joker may have anti-social personality disorder.