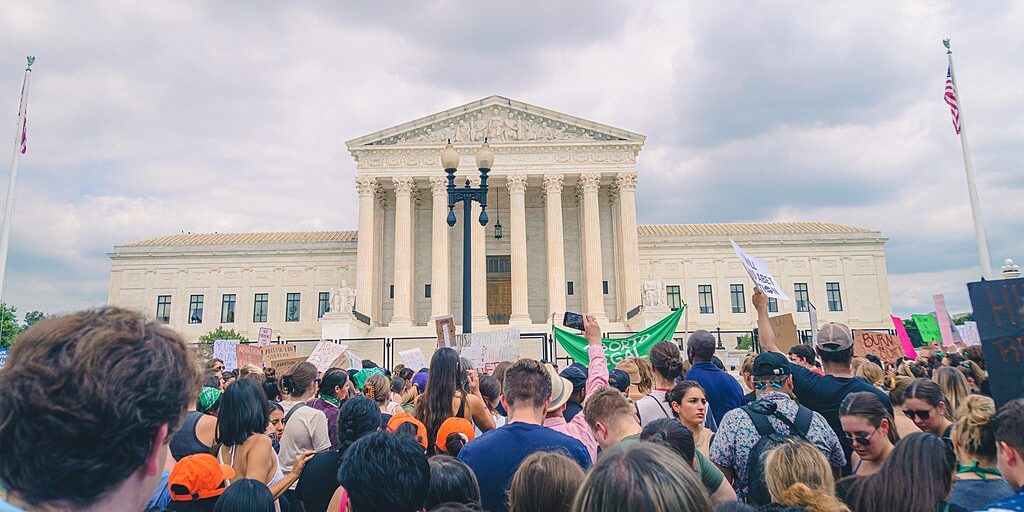 What do we tell our children?..Protests at the Supreme Court of the United States on the day Roe vs Wade was overturned

After a full weekend of sound and fury over the Friday release of the Supreme Court’s Dobbs decision that overturned Roe v Wade, maybe this is a good time to take stock of where we are actually at on the law side of things outside the news media and online cacophony.

The Supreme Court’s overturning of Roe v. Wade on Friday sets off a cascade of antiabortion legislation that will affect roughly half the country.

Without the landmark precedent in place, access to abortion began to change quickly. First, 13 states with “trigger bans,” designed to take effect if Roe were struck down, will prohibit abortion within 30 days. At least eight states banned the procedure the day the ruling was released. Several others with antiabortion laws blocked by the courts are expected to act, with lawmakers moving to activate their dormant legislation. A handful of states also have pre-Roe abortion bans that could be reactivated, and others moved immediately to introduce new legislation.

In 20 states and the District of Columbia, abortion has been legal and is likely to be protected.

On Friday, Virginia Gov. Glenn Youngkin (R) said he will seek an abortion ban after 15 weeks of pregnancy. While most state legislatures have adjourned for the year, some governors have expressed an interest in convening special sessions to pass additional antiabortion legislation — or to remove antiabortion laws already on the books. Abortion access in other states will depend on the midterm elections.

There are fancy charts and such but the long story short is this: Even subdividing the states up the way WaPo has, there is still variations state to state. The first group of “trigger law” states are grouped together as already having abortion restrictions in affect, but each work a little differently. Utah, Texas, Oklahoma, Arkansas, Louisiana, Alabama, Kentucky, Missouri, and South Dakota All of them have some exceptions for life of the mother, but there are variances in that criteria, and in cases of rape, incest, and other situations. Other states like Idaho, Wyoming, North Dakota, Tennessee, and Mississippi have 30 day “go in effect” dates for their trigger laws.

From there it gets complicated. Five states (AL, GA, IA, and OH) have current court injunctions or strike downs for recent legislation, which will now be re-litigated. West Virginia never re-legislated it’s ban that was in place before Roe v Wade but has recently passed a constitutional amendment all but banning abortion. Then there is a slew of states that don’t have specific legislation but after Dobbs and in a mid-term year it’s a safe bet most of those legislative bodies will be dealing with the issue. On the other half of ledger, 18 states have passed legislation protecting abortion and with states like California, the Pacific Northwest, and New England solidly blue a mixture of legislation, state court decisions, and state constitutional moves will probably be furthering those protections.

The Washington Post has a good, color-coded ledger of which states are where, doing what, and probably will do that you can read here.

The short version: After nearly 50 years of debate since Roe V Wade, Dobbs overturning it isn’t the end of the debate. More likely, we are all at the middle of the beginning, and will be doing this for another 50 years.