On Energy Independence and Oil Prices

Gas prices, as you may have noticed, are surging. While they are not at record highs once you adjust for inflation, they are at levels we haven’t seen in ten years.

As a result, the Biden Administration is feeling the heat and the Republicans see an opportunity. The former’s response has been all over the place — more on that in a minute — but the latter seem to have coalesced around a message: Donald Trump brought us energy independence and low gas and oil prices; Joe Biden has destroyed that.

It’s a good slogan but is it true?

Let’s define what is meant by “energy independence”. The bulk of energy used in the United States is electric. About 20% of that comes from renewables, which are obviously domestic. Another 20% is nuclear. We actually import most of our uranium, but that’s a strategic decision. We have plenty of domestic uranium if we ever need it. Another fifth is from coal, which is mostly domestic and is a market where the US exports way more than it imports. Natural gas constitutes the rest. This is also mostly domestic. With both coal and natural gas, we have significantly reduced imports but that decline has been going on for 17 years. At best, you could say the Trump continued the long-term trend.

What most people think of when they’re talking “energy independence” is oil prices. And, indeed, in 2019, we exported more oil than we imported. But that too is part of a long term trend, with crude oil imports have dropped precipitously since 2005. 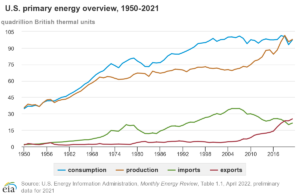 Energy consumption, use, imports and exports.

Putting this all together, we find the following

“Wait, Mike,” you say. “We’re still energy independent? Then why did I have to saw off an arm last time I went to the gas pump?” Good question, hypothetical straw man. Here’s why. Because the price of oil is determined by global markets. Oil, for those of you who went to Ohio State, is a liquid. This means it can be transported to whoever will pay the most for it. When the market is glutted with oil, the price comes down. When demand surges or production falls, the price goes up. And it goes up for everyone all over the world. I’m not going to pretend to be an oil expert, but those who are experts tell us there are many factors driving the surge in gas prices, including shutting down old refineries, the war in Ukraine and the Trump Administration getting oil-producing nations to slash production in 2020 lest the oil companies lose money. Not once have I seen “our slight surplus of oil turned into a slight deficit” cited as a reason for this high prices.

Markets work the way markets work. The only way “energy independence” would keep the price of gas down is if we banned oil exports and forced American oil companies to sell us oil at “reasonable” prices. That would work … for a while. Until you killed domestic oil production and caused shortages.

In other words, energy independence is red herring. It has nothing to do with the current situation. If our oil production were slightly higher, that would not drop gas prices to $2 a gallon. At most, it would drop oil prices a small amount.

Of course, the reason Republicans are harping on “energy independence” is that they don’t actually have any ideas for how to bring gas prices down. There’s not a big golden dial in Washington labelled “gas prices” that they can flip over. They’ve also talked about Keystone XL, but that pipeline would have imported oil from Canada, and mostly not the kind you refine into gasoline.

Of course, the Biden Administration’s response to higher oil prices has hardly been any better. For example, they’ve been telling people to buy electric cars. Fundamentally, this makes sense: the only way to free yourself of the tyranny of the oil marketplace is to not use it. But on a practical level, it’s nonsense. Electric cars are expensive. Manufacturing capacity is still limited.1 We don’t know that we have the capacity to produce enough batteries to run a global fleet. And there some applications — such as long-haul trucking — where electric vehicle are impractical. They’ve also floated the idea of gas rebate cards, which even the progressive wing noted would increase consumption and therefore prices. And more recently, they’ve floated the idea of gas tax holiday, which would have the same effects, only slightly differently.

Ultimately, this all pawing the ground. Gas prices are going to do what gas prices are going to do. Any solution — increasing production, decreasing demand, building more refineries — is something that will not have an effect for many years. The “energy independence” in recent years did not happen overnight but was the result of two decades of work. Reducing gas prices from their current peak will also require a lot of long-term planning, some of which is already in progress.

But in the end, the ground must be pawed. Because the one thing that unites all of our politics — Democrat or Republican, conservative or liberal — is the belief that Americans are entitled to cheap gas.