The Best Cat I Never Wanted 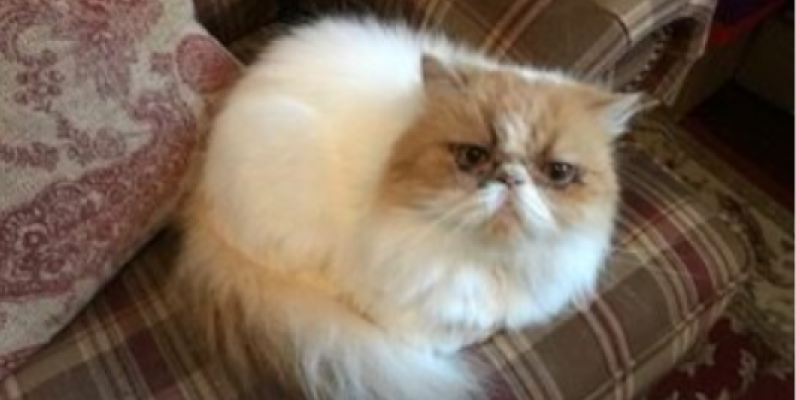 If you’re a pet owner, you know that each one is unique, and they all leave their little paw prints on your heart. But some of them are more difficult to love than others. I’m a legendary crazy cat lady (it’s right their in the Twitter handle.) I have a particular fondness for Persians. My Himalayan Marco is the most spoiled cat on the planet. I always wanted a companion for him, but my ex husband kept me on a strict one cat limit (and, in his defense, it’s because he knew that given the opportunity I’d end up one of those hoarders you see on the news.) After the divorce, I realized that I had nothing and nobody stopping me any more, and in a combination of defiance and grief, I contact the local rescue society about the adorable white Persian I’d seen on their Facebook page. They told me he was till available – BUT there was a catch: He was part of a bonded pair and if I wanted Poof, I had to take Patch as well. They had been languishing at the shelter for months because nobody was willing to take both of them. Until I came along.

I regretted it almost immediately. Both cats were in pitiful shape. They were underweight. Their fur had become so matted they had to be shaved, and yet they still had infected sores on their skin in addition to respiratory infections and eye ulcers. Another $1000 in vet bills later and I still had 2 traumatized kitties. To make matters worse, Marco was NOT HAPPY. He liked being an only cat and decided that he had quite enough drama in his life without these interlopers taking over HIS HOUSE. I wanted to take them back to the rescue society, but I knew that would be a death sentence for them. So, I persevered and decided that if they didn’t adjust, I would keep them until I could find a good home for them. Poofy settled in fairly quickly. He’s so sweet and loving and all he wanted was a full belly and a lap to sit in and I was providing both so he was good. But Patch? He didn’t like me and honestly, I didn’t care much for him either. He cringed when I tried to pet him and one time he even bit me in the face. He had so many neuroses. He was terrified of every other human on the planet – and he only tolerated me because I had the ability to open cans of cat food. For that he decided to tolerate me.

We eventually reached a détente. Marco was able to reassert his position as alpha cat. Poofy was fine. And Patch decided maybe I wasn’t the worst person in the world. People always told me that Marco looked like Grumpycat. One day, while staring at that little smushed face, I told Patch “you know, YOU’RE the grumpycat! Except that you’re orange – which makes you a TRUMPYCAT!”

And thus a legend was born.

It was the perfect name for him. In addition to the orange, he was a bully that made Marco miserable. He wanted attention all the time. And he was the cat I never wanted in the first place but the one I was stuck with anyway. He was the master of chaos. He was so traumatized, he would go in the bathroom and push out all the drawers so that he could hide behind the bottom one. He would push the other cats out of the way. When the contractors came over, he was so scared he climbed up the chimney and stayed their the whole day until they left. He hid every time I had company. The maid came for a year and never saw him. He wouldn’t let me comb him so I had to keep taking him back to the groomers and have all his fur shaved off. He barfed all over the house. He somehow ripped a big hole in his neck and required 3 trips back to the vet. I’ve spent more money on his medical bills than all the other cats I’ve ever had all put together.

Then, 2 years ago I ended up in the hospital and almost died. When I thought I was a goner, I only had one worry: what was going to happen to Trumpycat? Marco has a godmother who had pledged to care for him if anything ever happened to me. And Poofy is so adorable someone would take him in a heartbeat. But Trumpy? How would they even CATCH HIM? I had visions of my friend having to call animal control just to get him out of the house. Turns out, I didn’t need to worry. He decided that my friend Tracey (the sainted woman who fed them for over 2 months while I was in the hospital) was his new mommy and she ALSO knew how to open catfood.  As soon as they took me off the ventilator, I received pledges from her and Marco’s godmother that if anything DID happen to me, all three cats would be OK. But fortunately for all of us, I eventually recovered. During my whole long hospital stay all I wanted was to be home with my boys. Which I eventually was.

And everything has been great for the last 2 years. They all got used to me working from home and lobbied to have dinner time moved up earlier each day. Trumpycat was my special little buddy. He would lie next to me in bed and watch TV with me every night. He never complained about my taste in shows. I would talk to him and he would just look up at me and purr. We watched all 22 seasons of “Midsomer Murders” together. Truth be told, Trumpy probably saw most of them more than once since I have a bad habit of falling asleep in the middle. We were just one big happy cat family.

That was until last week when Trumpy started having “elimination incidents,” which is apparently fancy vet talk for “peed all over my bed.” I suspected a urinary infection and took him to the vet. And I was stunned when the diagnosis came back as cancer. There was nothing they could do for him. I just couldn’t bear the thought of him spending his last night in a cage at the vet’s office, so I brought him home Friday night for one last weekend with me. I made sure he got his favorite food. We spent the whole weekend snuggling and watching TV together. His Aunt Tracey came to tell him goodbye. We had snuggles this morning. He came in my office as to tell me he was ready to go. I told his brothers to say goodbye, loaded him up and took him back to the vet. I stayed with him and help him and told him I loved him and that he had been a good kitty. I was there with him until the end.

And now my heart is broken into a million pieces. I just hope he knew how much he was loved. He will never know how much joy and laughter he has brought to my Facebook friends over the years. The bible doesn’t tell us if all cats go to heaven, but how could you look into those eyes and think that creature didn’t have a soul. So, rest in peace Trumpycat. Please be waiting for me on the other side of the rainbow bridge.