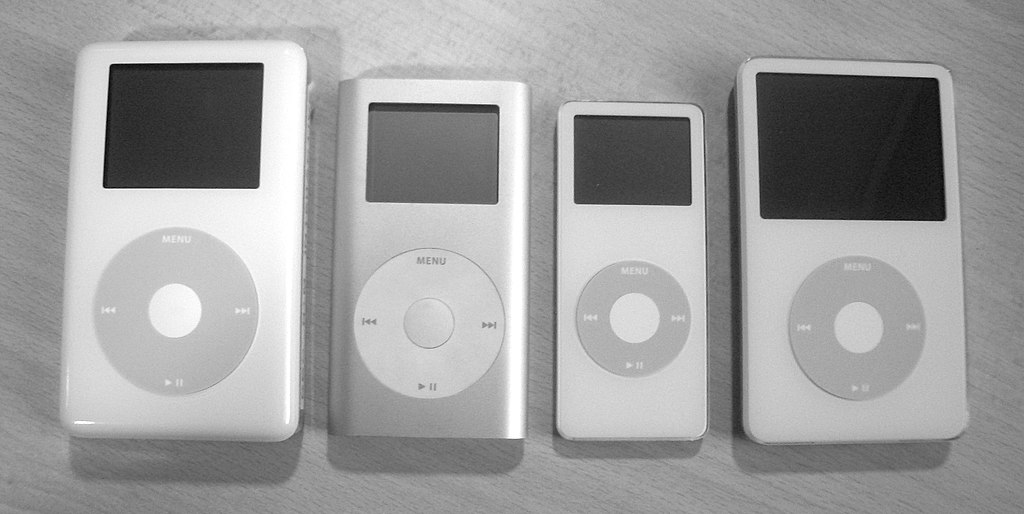 Attention! As of this week, Apple is no longer offering the IPod for sale, it is now sold out and discontinued. An end of an era they say. Will there be riots? It was the device that totally revolutionized how we listened to music. Most of you are probably thinking…wait, Apple still sold iPods up until the other day???

Twenty-one years ago, Apple introduced the first iPod. It was a music lover’s dream come true. A device that was about the size of a calculator (do they even sell those anymore!) in your pocket or banded to your arm that had the capability of holding one thousand songs. A thousand songs. In your pocket. Led Zeppelin only recorded 108 songs. The Stones have recorded to date 422 songs. The Beatles have 213. One could have the whole catalogue of the three biggest rock bands in the world and still have room to spare.

We went from mono to stereo in the late fifties. Along the way, we listened to albums, reel to reel, 8 (click) tracks, cassettes, CDs. As music evolved so did the way we listened to it. Companies tried to figure out ways to make music more portable since most of us could not fit a record player in the car (except for Muhammad Ali) or carry one around outside. Add the fragility of the records themselves to the equation and you could understand the conundrum the industry and music lovers faced when it came to portability.

In 1966 the 8-track became available to consumers for the first time. They were a novel invention that solved many of the portability issues at first if you could afford the tapes and the players needed for them. They eventually became affordable but never totally replaced albums. They did offer an alternative to listening to music and allowed for one to easily hear their purchase just about anywhere they wanted to. They were limited though in how much music they could hold and were notorious for cutting off a long jam to “flip sides” right in the middle of a guitar solo with a sudden pause and the dreaded “click” that signaled the flip.

During the late seventies/early eighties the cassette tape slowly edged the 8-track out. The cassette allowed the listener to rewind, fast-forward, pause and record and was more reliable than the 8-track. With its smaller size and longer recording lengths, the cassette soon became the most popular way to listen to music. Sony invented the Walkman which allowed you to listen to a cassette just about anywhere without disturbing the people around you. One could use the cassette to create mix tapes, record their favorite song off of the radio if you timed it right or play them in your Tecsonic J-1 Super Jumbo while out at the Moon Tower with all your friends. All you needed was a pencil handy to rewind a partially eaten tape to save it most of the time whenever the occasional jam-up would a occur. Cassettes were a vast improvement over the 8-track but still had their flaws. It hurt album sales but did not entirely kill them off.

Compact Disks (CDs) became available to the public not long after the cassette. They offered a clean, crisp sound, the ability to record and skip directly to tracks and durability. It took a while for albums to be converted to CDs and the price to come down but eventually the CD replaced the cassette. All the while, album sales suffered but endured. Purists (who still exist today) would argue that CDs were too clear, that they lacked the hiss, pop and pure rich sound that a vinyl record provided. Nevertheless, CDs ruled the world. Who did not have a book of CDs in the backseat or the classic CD sun visor holder back then in their ride? CDs ended up having their flaws too. Scratches caused the dreaded skip rendering them practically useless, except for maybe hung as wind chimes to keep the deer out of your garden.

Then in 2001 everything changed when Steve Jobs’ Apple, the cool and unconventional computer company who manufactured the slick computers that challenged the uber-nerd Bill Gates’ Microsoft in the epic battle to gain access to the dens, rec-rooms and classrooms near you, unleashed the iPod. The world was never the same. There were many imitators to Jobs’ masterpiece (like Gates’ Zune) but nothing would come close to the popularity of the iPod.

The iPod gave the purchaser more personal freedom than any other listening device before it. Capacity, simplicity, the ability to create playlists, purchase single songs through Apple’s iTunes. Add to that the P2P sites that proliferated the internet in the early 2000’s, the choices were practically unlimited when it came to what you could play on it.

Personally, as of this writing, I believe the iPod is the most important musical invention in my lifetime. Nothing comes close to what it changed for me when it comes to listening to music.

As the years passed, different versions of the iPod would come out. More capacity, even smaller sizes. It was incredible to me that I could load a months’ worth of music to one, make multiple playlists from that music for working out, chilling out, road trips, airplane flights-you name it and barely even know that I had the iPod in my pocket at the time.

Looking back, who knew that the invention of the iPod, a device made for the consumer to have complete control when it came to how they listen to their music by purchasing and choosing individual songs to listen to rather than full albums, would end up turning the recording industry upside down. It led us to the streaming services we have today that have taken back that control all while screwing the artists who create the music we all love.

Today, we let algorithms choose for us. We actually rent our music now. We do not own it anymore and that is lugubrious to say the least. We are back to the days that are similar to when radio decided what we listened to except now we pay for the privilege (kind of like we pay for bottled water or canned air).

This narrative brings to mind a song by Peter Gabriel from his best-selling solo album, 1987’s So; We Do What We’re Told (Milgram’s 37). It was based off of a study that had to do with participants administering increasing amounts of electric shock to others to prove the willingness to obey an authority figure, even though they knew it was wrong to do so.

Of course, listening to music on Spotify or some other streaming service is not a sociological experiment by any means however, if you really think about it, to what degree we so conveniently hand over our musical listening pleasure to a computer to decide what we hear does draw some parallel lines.

Yes, I am still holding out from Big Brother telling me what is good for me. I have The Library collection that allows me to be creative with my music. I can still load songs on to my phone to listen to on those plane rides or sitting out by the fire. I can access it by external hard drive, cloud or my laptop. I will abide as long as I can, just like the vinyl purists (and The Dude) have after all these years.

Thanks though to the iPod for giving millions of us the ability to choose and the freedom of carrying our beloved songs with us practically anywhere we wanted.

It lasted twenty-one years before its demise. If I actually live another twenty years, I will be anxious to hear how we will listen to music in the year 2042. Will streaming continue? Will there be a back to the future revolt like the resurgence of vinyl today? I can tell you this, I will still be jamming Zeppelin in whatever capacity I have available to me by then. The other olds will just have to deal and turn off their hearing aids I suppose!

In advance of that dear reader, make sure you keep listening to your music any which way you can…It is the best way to get your mind right and most importantly, it is good for the soul.