Mini-Throughput, Black Hole Edition: There is a Monster at the end of this Galaxy 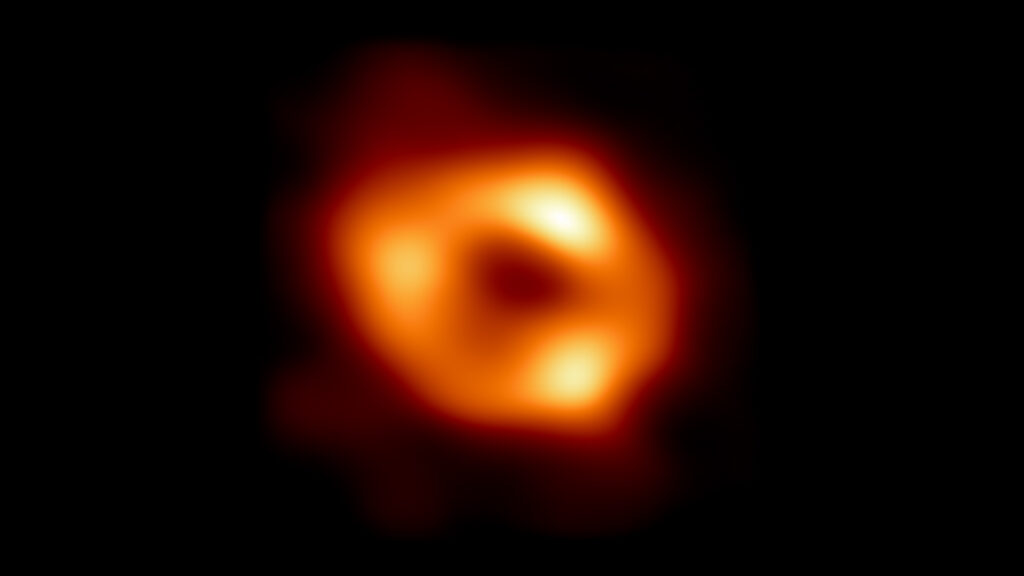 Is that they Eye of Sauron? The Ring of Power? Alex Jones’ colonoscopy? Good guesses, my friends, but it’s actually the black hole at the center of our galaxy:

Astronomers announced on Thursday that they had pierced the veil of darkness and dust at the center of our Milky Way galaxy to capture the first picture of “the gentle giant” dwelling there: a supermassive black hole, a trapdoor in space-time through which the equivalent of four million suns have been dispatched to eternity, leaving behind only their gravity and violently bent space-time.

The image, released in six simultaneous news conferences in Washington, and around the globe, showed a lumpy doughnut of radio emission framing empty space. Oohs and aahs broke out at the National Press Club in Washington when Feryal Ozel of the University of Arizona displayed what she called “the first direct image of the gentle giant in the center of our galaxy.” She added: “It seems that black holes like doughnuts.”

This image comes from the Event Horizon Telescope — a now 13-institution consortium of radio telescopes all over the globe that uses the Earth as its baseline, resolving details as though it were a telescope the size of the Earth. You may remember their previous stunning image of the black hole in the core of Messier 87. This confirms that nothing we saw in that image was a fluke. We still see the shadow of the black hole, the lumpy accretion disk and the motions and formation that confirm the Theory of Relativity.

There’s a long history here, so pull up a chair and get comfortable. We believe that almost all large galaxies have supermassive black holes at their centers. When galaxies form and merge, black holes migrate to the center and merge, creating monstrous objects that can weigh millions or billions of times as much as the Sun. Despite being black holes, they are, for a time, the brightest objects in the universe. They form thick hot disks of material swirling into the abyss that can outshine the rest of the galaxy. We call these beasts “active galaxies”, of which M87 is one of the nearest.

Over time, however, the black holes gobble up all the gas, dust and stars nearby and begin to go quiet. In the nearby universe, the core black holes of galaxies are mostly quiet, although they may burp every few millions years if something wanders too close. Ours did about 3.5 million years ago.

The first hint that our Galaxy contained one of these behemoths was when Karl Jansky, the father of radio astronomy, turned on the first radio telescope and discovered radio emission from the center of our Galaxy, an object he would call Sagittarius A. Although it would be decade before we knew what created the radio emission, what he was detecting was the accretion disk of material swirling into a four million solar mass black hole during its relatively calm retirement. 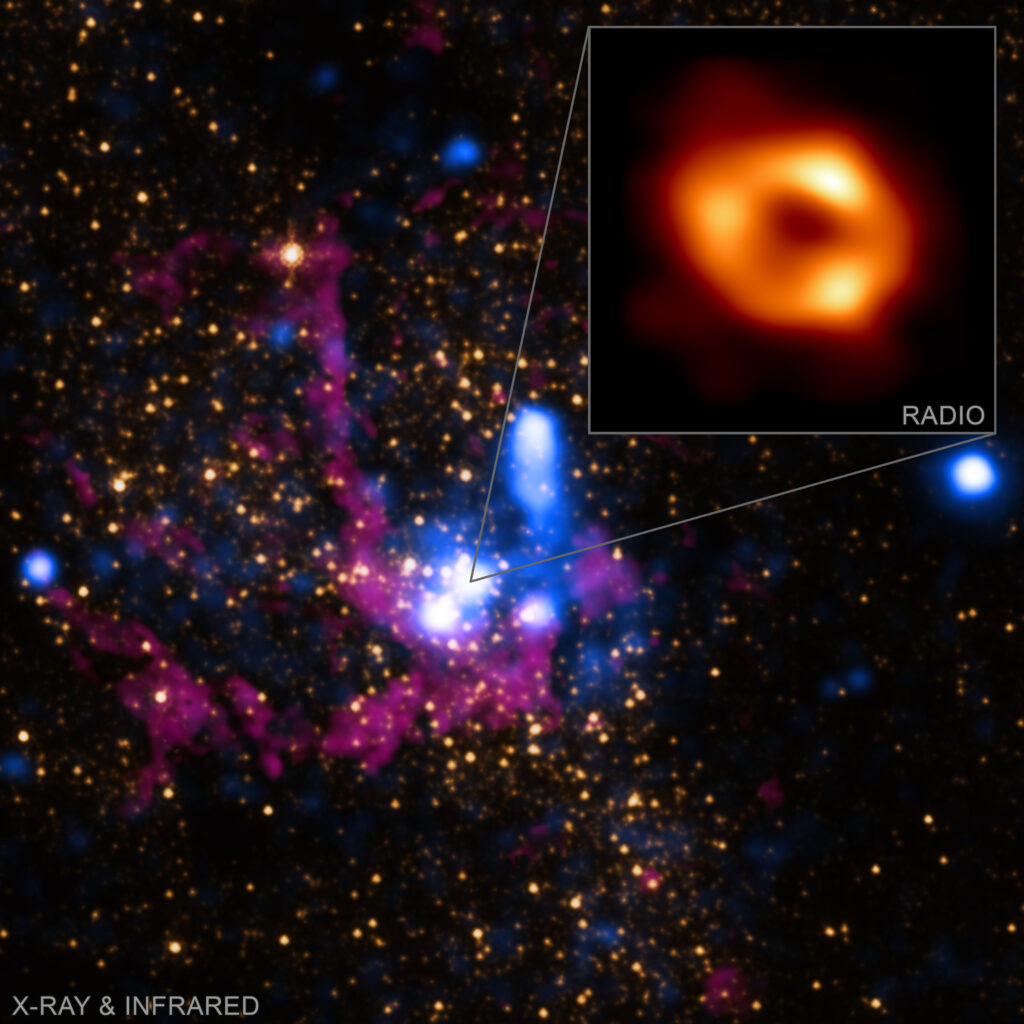 The main panel of this graphic contains X-ray data from Chandra (blue) depicting hot gas that was blown away from massive stars near the black hole. Two images of infrared light at different wavelengths from NASA’s Hubble Space Telescope show stars (orange) and cool gas (purple). These images are seven light years across at the distance of Sgr A*. A pull-out shows the new EHT image, which is only about 1.8 x 10-5 light years across (0.000018 light years, or about 10 light minutes).

The main panel of this graphic contains X-ray data from Chandra (blue) depicting hot gas that was blown away from massive stars near the black hole. Two images of infrared light at different wavelengths from NASA’s Hubble Space Telescope show stars (orange) and cool gas (purple). These images are seven light years across at the distance of Sgr A*. A pull-out shows the new EHT image, which is only about 1.8 x 10-5 light years across (0.000018 light years, or about 10 light minutes). (Credit: X-ray: NASA/CXC/SAO; IR: NASA/HST/STScI. Inset: Radio (EHT Collaboration))

Over the decades, evidence accumulated for the existence of the black hole — I did my senior presentation on the idea in 1994. Two years ago, Reinhard Genzel and Andrea Ghez won a Nobel Prize for monitoring the motions of stars around the Galactic Center and proving that they were orbiting a dark compact mass there that could only be a black hole.

But proving it indirectly is not the same thing as seeing it. And while the Event Horizon data were taken five years ago, it took this long to process it all. Sagittarius A* is small — well, small by supermassive black hole standards — and changes in minute-long time scales. So what you’re seeing is kind of a time-averaged image to represent what the black hole looks like at any moment in time.

Observations are ongoing and with more telescopes joining the collaboration, the images are only going to get better. There is hope that we might actually get a movie that would show the disk swirling in real time (it takes a few minutes to half an hour for it to rotate). If so, that will be a stunning moment — watching the evolution of a black hole only 50 million miles across from 25,000 light years away almost a century after Karl Jansky first wondered what was making all that racket in the sky.