From Jackasses to Sad Sacks: Democrats Struggle in The Culture War 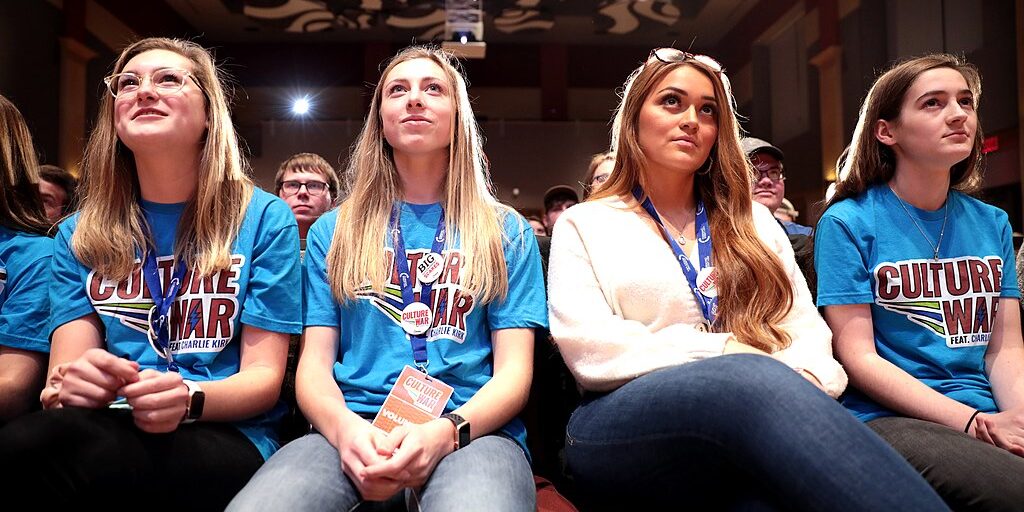 In a two-way war, the conflict is engaged by both sides, fighting for their goals and causes.

In an address to the heritage foundation Thursday night, former President Donald Trump said the Republican Party must win the culture war it is fighting against the Democratic Party.

As new laws are being passed in states that restrict or outlaw abortion, target transgender children and violate the Voting Rights Act, Democrats on the national level seem to be frightened to bite back against these laws or blatantly false statements made by the opposing party that make the claims that children are being “groomed” by a company or by their teachers.

Despite being known as a party of righteous social justice warriors, Dems are horrified to engage in culture wars out of fear of blow back or self immolation.

This has been true as far back as 2004, as the party was timid to support same sex marriage—in spite of one of their anchor states and cradle of the modern day party, Massachusetts, becoming the first state to legalize same sex marriage that very year.

The reality is Democrats constantly shoot themselves in the foot out of a need for perfection: in messaging, policy, elections, media, every single atom in their body wants the *perfect* government.

This applies to all wings of the party, from Senator Joe Manchin of West Virginia looking for his bipartisan utopia in the senate, to Representative Alexandria Ocasta Cortez working to have specific climate policies being passed first before a bipartisan infrastructure bill, to Speaker Nancy Pelosi of California blasting her caucus members for not saying the right thing to ensure a bill doesn’t blow up, everything must be perfect.

Meanwhile, in the search for the perfect retort, Republicans know they can lob claims because Dems won’t fight back.  They know Dems are scared of messing up, and will continue to make advances in their social agenda, despite how unpopular it is nationally, in states.

Clearly, the party has not heeded the words from former President Barack Obama to not let perfect be the enemy of good.

Even so, it appears that national Democrats would prefer to focus on anything else other than standing their ground and fighting the culture war.

If their fear is that it will sink their chances in 2022, the reality is that they were doomed from the start due the infamous midterm curse that the president’s party suffers.

If they are worried that the GOP will pivot to inflation again, then they are cowardly in taking the risk of not holding the opposition party’s feet to the fire.

People’s lives could be at stake, and doing nothing is simply unacceptable at this point.

The fact that Mallory McMorrow, a Democratic State Senator from Michigan managed to invoke rage, emotion and outrage in her condemnation speech better than the current party which holds a trifecta in the legislative and executive branches of government is a national embarrassment.

The fact that President Joe Biden, who is known for his passionate firebrand speech denouncing the hate in Virginia in 2017 only has given some mild mannered, “whats going on here” comments at two fundraisers is a national embarassment.

The fact that Krysten Sinema or Ed Markey or even Nancy Pelosi have yet to deliver speech upon speech upon speech saying: “these are lies, hate speech, and 100% wrong” and instead hide behind mealy mouth statements is a national embarrassment.

Ezra Klein said that Democrats have a problem resonating throughout the country.  The answer to this remedy is right there.

Its not going to come from solving inflation or making policy.  That is not conflict that can be reported on television, radio or news. Instead, tell the story of your constituents, whose rights to privacy and happiness are being stripped away by those in power.

By not engaging in the conversation, you have failed to uphold these certain unalienable rights that you swore to protect when you spoke your oath of office.

Dems are often represented by a donkey, a stubborn animal with a mighty loud bray that will kick back at those who agitate it.

Perhaps the donkey is not an apt symbol for this party anymore, as it is representing a limping horse that has lost its way on the race track.

Right now, this isn’t the party of LBJ, who took the risk of alienating the solid south to sign the Civil rights act for the benefit of the country; this isn’t the party of John Lewis, who risked life and limb for good trouble for his fellow African Americans; and most damning of all: this is certainly not the party of Joe Biden, who went on Meet the Press and shocked the political world by coming out in support of gay marriage.

Adam Bass is an aspiring reporter and broadcaster from Massachusetts. He graduated from Wheaton College in Norton MA. Bass was general manager, and head of the political news coverage department of WCCS Wheaton College, where he did extensive coverage of the Massachusetts Senate Primary Race and The Massachusetts 4th congressional district primary race, as well as reporting on other National and local news. He now works as an intern for Newton News at NewTV where he has covered the 2021 municipal elections, hosts and produces The Cod Cabin where he and three of his colleagues podcast about Massachusetts politics and news, and has been working part time at WCRN 830 AM in Worcester Mass.