A couple of months ago, NASA successfully launched its new flagship mission: the massive James Webb Space Telescope. Since then, the telescope has deployed its sunshield, unfolded its mirrors and aligned its optics. But yesterday hit a new milestone: the first image. Behold: 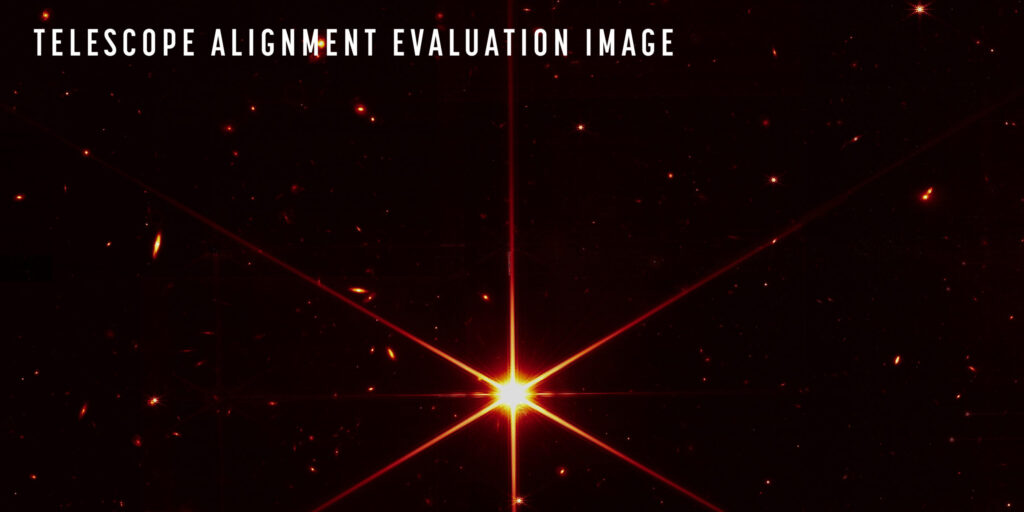 While the purpose of this image was to focus on the bright star at the center for alignment evaluation, Webb’s optics and NIRCam are so sensitive that the galaxies and stars seen in the background show up. At this stage of Webb’s mirror alignment, known as “fine phasing,” each of the primary mirror segments have been adjusted to produce one unified image of the same star using only the NIRCam instrument. This image of the star, which is called 2MASS J17554042+6551277, uses a red filter to optimize visual contrast.
Credits: NASA/STScI

This may look like a boring image of a bright star. But, to the trained eye, it is spectacular. Infrared telescopes tend to have somewhat coarse resolution because of the size of the light waves they are focusing. The Spitzer mission, for example, had a resolution of two arc-seconds (an arc-second is one 3600th of a degree or about a 1800th of the size of the full moon). This image has incredible resolution, hiting at the 0.1 arc-second target resolution. The field also contains dozens of little galaxies, each of which is interesting in its own right.

The fun part is … this isn’t James Webb Space Telescope doing science. This is just an image to check the alignment and make sure everything’s working according to plan. As the instruments are brought online, JWST will begin its core science missions: unveiling the first stars and newly-forming stars in the nearby universe.

Only twice before have I seen this much excitement in the astronomy community. The first was when I was a young pup of an astronomer, just finishing college and attending the American Astronomical Society Meeting in the Twin Cities. The Hubble Space Telescope had been launched a few years earlier but, in a rather embarrassing moment, its beautiful perfect mirror had been ground to precisely the wrong shape, creating a spherical abberation that blurred the images. After the first servicing mission, everyone waited for the images with the corrected optics to come down. And you could hear gasps when they were unveiled.

oon after Hubble first began sending images from space, scientists discovered that the telescope’s primary mirror had a flaw called spherical aberration. This flaw caused some of the collected light from celestial objects to be scattered, resulting in fuzzy images. In 1994, NASA released these two images of M100 taken with Hubble before (left) and after (right) the spherical aberration problem was corrected.
Credits: ESA/Hubble & NASA

The second was in 2017, when the Laser Interferometer Gravitational-Wave Observatory detected its first gravitational waves that were tied to an optical source, opening up a new way of exploring the universe. Maybe one day, I’ll write that one up. And now I’m seeing it for the third time, as JWST slowly shows what it is capable of. In this case, the excitement is enhanced by the long wait and the gnawing fear many had that this experiment wouldn’t work.

I hope to stick around long enough that I’ll be able to experience this frisson again. I have no idea what it will be. Maybe a mission to Europa. Maybe the discovery of life on another planet. Maybe a new mission that I can’t foresee that will solve some of the deeper mysteries of cosmology. But, for now, it’s exciting to stand on the brink of new transformative discovery.