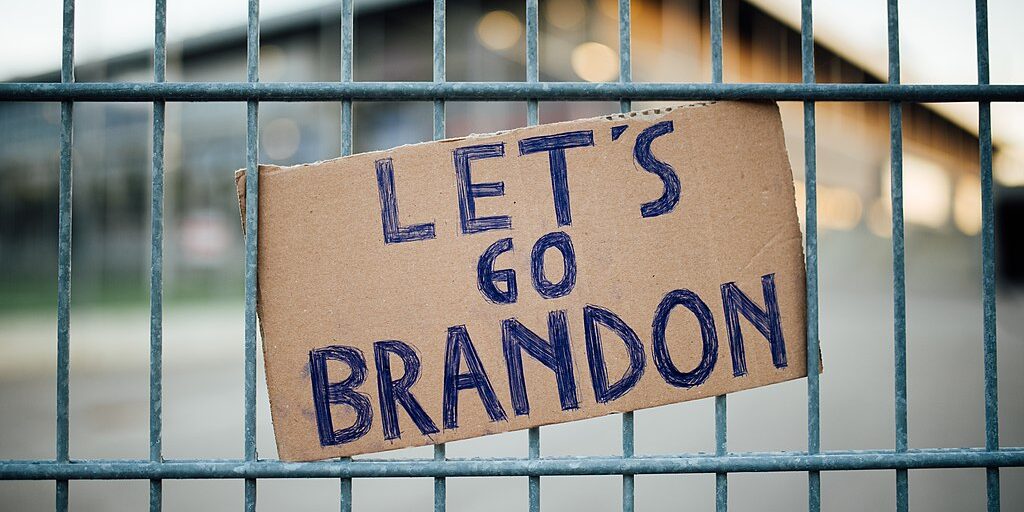 Photo by Ivan Radic, CC BY 2.0 <https://creativecommons.org/licenses/by/2.0>, via Wikimedia Commons

A friend recently posted “Let’s Go Brandon” as her social media status. Never one to shy away from a lively conversation and a sucker for debates that go nowhere, I asked her about it. She said that her thinly veiled vulgarity towards the president stemmed from her belief that he wanted to end her way of life. When I reminded her that we’d grown up as neighbors in the same small, mid-western town, I asked her how she would define her way of life.

She replied “Freedom, Baby!”  This led to a conversation we’d had before: her belief that freedom meant the government leaving people alone countered with my position that the freedom she longed for came with obligations she was unwilling to accept. I would prefer small government as well, but I believe the key to achieving small government is to leave nothing for it to do.  Feed your neighbors, shelter those without, nurse the sick. Pick up a shovel and fill some sandbags, grab and oar and row. Get vaccinated or wear a mask. Leave no voids in your community for government to fill, because it will, often ineffectively and with unintended consequences.

She was having none of it, “Why should I help my neighbor, though? That’s on them.” Her position was that being expected to do things for other people violated her rights of life, liberty, and happiness. We ended the conversation after I said it was impossible to have it both ways: we can’t actively reject the concept of civic responsibility and expect government to stay out of our lives. Although we did grow up as next-door neighbors and we both identify as conservatives, we remain light years apart on this issue.

Life, liberty, and the pursuit of happiness. Thomas Jefferson turned this phrase from a mashup pulled from two of English philosopher John Locke’s works. In Second Treatise of Government, Locke wrote than man’s three natural rights were “life, liberty, and property,” and he established “the pursuit of happiness” as foundational to liberty in An Essay Concerning Human Understanding.  Citizens critical of our American government often anchor their critiques with an argument that what the government is doing (or proposes to do) doesn’t make them happy, as if happiness is one of our Natural Rights. Sorry, but despite what Victoria Osteen says, God does not just “want you to be happy,” and I’m pretty sure the Founding Fathers didn’t either.

What did Locke mean when he opined on happiness and the human condition? And why would Jefferson choose to write “the pursuit of happiness” instead of “property” in the Declaration of Independence? As a student of Locke’s work, Jefferson made — not a haphazard choice of words — but an intentional and deliberate homage to a thinker who influenced the vision for America. Neither man contemplated a world where human beings would include healthcare, housing, free college, and employment as unalienable rights, but there are not small cohorts of Americans that would define their pursuit of happiness to include year-round college football or an invitation to tee it up at Augusta National. Surely there is some sort of middle ground, between things we need and things we’d like, between the role of government and the role of the individual.

Is it government’s role to provide everything we need? I think not. But is it possible for an individual to provide for all their own needs? Again, I think not. If government shouldn’t and individuals can’t, that leaves…us. You. Me. Community. Neighbors helping neighbors, regardless of what flags they’re flying or t-shirts they’re wearing.

Despite happiness as a choice of words, Locke and Jefferson were referring to a calling, rather than a feeling or state of being. Not that by our Creator we are entitled to happiness, but instead that the apex of our capabilities, humanity’s greatest achievement — the pursuit of happiness — was a condition allowing for the continuation of the human species. Species, not individual.

My “Let’s Go Brandon” friend is rejecting the idea that she has any sort of obligation to the community in which she lives. However, it is only fair to point out that my “Let’s Go Darwin!” friends are failing on this front as well. “Hurry up and die already!” is not a great representation of happiness and its certainly the opposite of continuation of the species. This falls short of our Creator’s expectations and the vision of our Founding Fathers, too.

Locke saw humans as being endowed by a Creator with an instinctive duty — a mandate on behalf of humanity — to provide for those in need. Jefferson drafted a document which assigned the role of securing that duty to the government. Reserving society’s burden outside the role of the State established that there are some problems so important that government shouldn’t solve them. But those…those are on us.

Freedom, Baby: It comes with responsibility.

Jennifer Worrel is a transplant from the Great Plains raising two sons and a husband in Metro Atlanta. Extremely likable until you get to know her, she remains a great invite to a dinner party. She prefers peeing in the woods to peeing on private planes and was once told by her husband that she is “way funnier online.” Writes about whatever interests her, she knows a little about a lot. For fun, she enjoys cooking from scratch and watching old Milton Friedman videos on YouTube. Jennifer's thoughts are her own and do not represent the views or position of any firm or affiliate she is lucky enough to associate with.