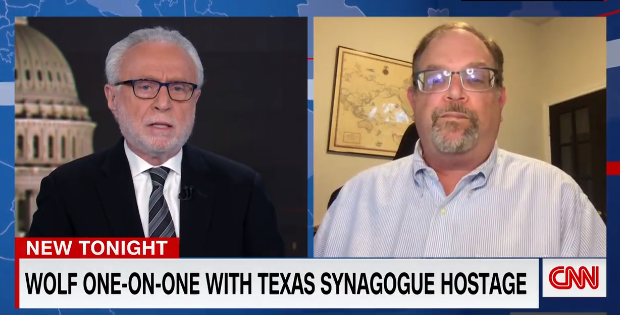 On CNN’s Situation Room with Wolf Blitzer, powerful insight from Jeffrey Cohen, one of the hostages in the Texas synagogue attack who talks about what the terrorist said about Jews that are all too common tropes in wider society.

Jeffrey Cohen, a hostage at the Colleyville synagogue, on his experience with the gunman: "He came to us, he terrorized us because he believed these tropes, these anti-Semitic tropes that the Jews control everything, and that if I go to the Jews, they can pull the strings." pic.twitter.com/xoBBrnZsPD

Yesterday for MLK Day I was writing about diversity, and trying to make the point that having an awareness of America being a diverse, pluralistic society and country is essential to adjusting how we talk about things like freedom, rights, and equal opportunity. Listing to Mr. Cohen, it is damning to hear things that are tropes online, or jokes, or throwaway everyday lazy prejudices we hear all the time coming out of the mouth of someone who took them to heart in an evil and wicked way with the intent to do harm about them. It should be a reminder of the power of words, even words we in our privileged land of free speech think nothing of slinging around just for a moments affect or social media attention. What’s just “a joke” or trope to you in the hands of hearts and minds twisted with hate and bent on destruction becomes fuel for the fires they seek to burn the world down with. Confronting them in the arena of ideas seems like a small thing compared to folks like Jeffrey Cohen who had to confront them with life-or-death consequences, but confront them we must.

Free speech in America means folks can say, and tweet, and post, and joke about prejudicial (or worse) tropes about Jewish people or anyone else. But that right of free speech doesn’t mean they should not have consequences for such speech. At a minimum folks of good faith who care about freedom, who care about liberty, who care about everyone getting a fair shake should push back, shout down, and call out such speech for what it is. Hateful, unnecessary, harmful, and unacceptable to a society that needs to do better treating everyone like equals. And it shouldn’t take a hostage situation to realize that in the wrong hands, or the wrong twisted dark hearts, intolerance passed off as jokes or harmless can be deadly serious.