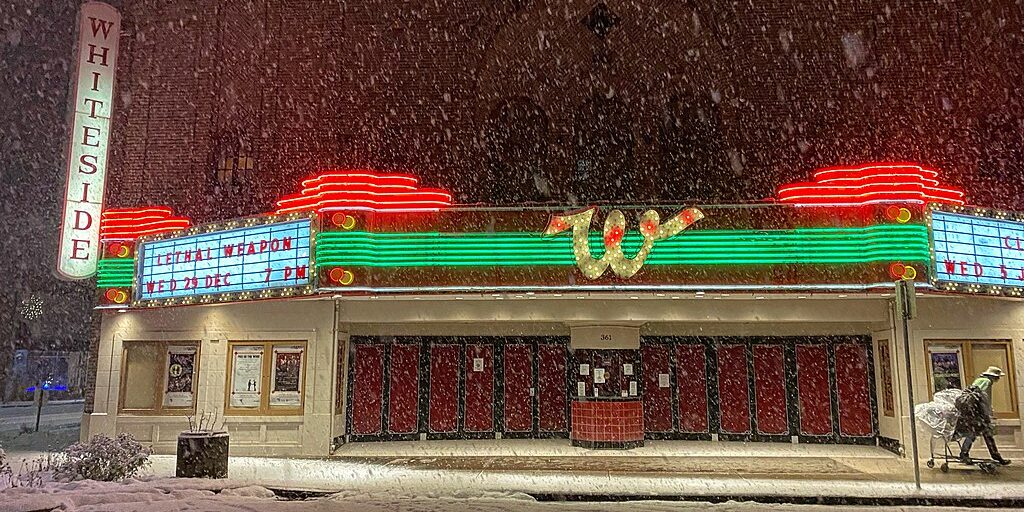 I checked the math more than once to arrive at 69 movies seen in theaters in the entirety of 2021. Nice. Of the movies on this list, there’s only one I haven’t talked about somewhere else on this site. The top eight were relatively straightforward (if the order wasn’t,) but those last two were somewhat agonizing. There are some movies that, based on the grade I gave them or what I said about them, should have been on this list. The issue? Retrospect. The Protégé, for one, fell down in my rankings without much thought. Same goes for movies like Miracle Valley and Palmer, although I still greatly enjoyed them. There were also some movies I didn’t get to see before writing this list. The French Dispatch and Licorice Pizza being two that stand out. Without further ado, my top ten movies of the year, in reverse order.

What I initially said was my favorite drama of the year, Here Today falls to second best drama at this point. It was between this, Queenpins, and Palmer for the number ten spot. I eventually went with this movie because of how it made me feel. One of the best movies I’ve ever seen that dealt with Alzheimer’s.

Luca is the only animated movie on this list. A coming-of-age story set against the backdrop of a little town in post-World War II Italy with themes of friendship and embracing who you are. I had a blast watching it.

One of the biggest surprises of the year, Copshop delivered. The fact that I didn’t know this movie existed until the day before or the day of that I saw this movie and yet it still ended up kicking so much ass is a testament to the movie itself. But not the studio marketing it. It is an incredibly enjoyable action movie.

Spider-Man: No Way Home is perhaps the best MCU Spider-Man movie. It managed to be loaded with fan service while avoiding cheapness. The fan service all feels earned. I have now seen it three times in theaters. The big applause moments were more muted in the third viewing, as I imagine a good chunk of the audience had already seen it before or had those moments spoiled for them already.

What made Zola so enjoyable was the lack of any good person. Everyone in the movie is awful for a litany of reasons. It’s a movie that works because you’re not really rooting for anyone. You’re just letting the events wash over you.

The only movie I did not talk about previously on this site is Tick, Tick… Boom! Lin-Manuel Miranda directs an adaptation of a musical by Broadway writer Jonathan Larson. Andrew Garfield is a delight as Larson, as the musical being adapted was autobiographical in nature. The songs are excellent, the rest of the cast rounds out the production well, and the tension is palpable. As a writer myself, the story spoke to me. Knowing little going into the movie is advised, which is why I won’t spoil anything more. The movie is streaming on Netflix.

The best comic book movie this year was The Suicide Squad. It didn’t light the box office on fire, but it is such a damn good movie. The hard R rating worked out really well. And that opening was bloody beautiful.

The Sparks Brothers is the best documentary I’ve seen since Won’t You Be My Neighbor? It covered a band I had somehow not heard of that I nearly instantly fell in love with. It is now streaming on Netflix.

What is easily the best video game adaptation of all time, Werewolves Within is a fantastic comedy horror film. I still need to get it on physical media as it doesn’t seem to be streaming anywhere for free just yet.

This final one should surprise no one considering how much I hyped it up this year. Nobody was an awesome movie from start to finish. Joins the pantheon of the top ten greatest action movies of all time, in my book. Might even crack the top five, not sure yet. I went into this movie expecting so much less than what I got. Absolutely blown away by it.

The top three movies of the year ended up staying the same since I first noted their order in my Werewolves Within review. The top three movies were just that good. As you might have noticed, I didn’t have a lot to say about most of the movies on this list. That’s the struggle when I have already talked about all but one of them before. I strained to find more to say than I already have. I recommend seeing all of them if you haven’t already.

Worst film of the year, somehow, easily goes to Annette. The only movie that could possibly top Space Jam: A New Legacy in terribleness. Mostly, that is due to expectation. I expected Space Jam: A New Legacy to be awful. And it was! I went into Annette so hopeful. The band Sparks wrote the film and did the soundtrack. How could it not be good? But it wasn’t. Why choose an actor who can’t sing to do a lion’s share of the singing in a musical? Absolutely stupid. If they had gotten someone like Oscar Isaac, the movie might not have been half bad. It could have been a C or a B. What lets the movie down beyond their choice of lead actor is its predictableness. At the start of the second act, a character gets introduced. I predicted he was the father of the titular child, and my girlfriend predicted Adam Driver’s character would kill him. We both made these predictions within moments of the character being introduced. And we were both right. These are events that didn’t happen for at least another hour into the movie. It just robs the third act of any tension when what comes next is that obvious. Also, the wooden marionette baby was just weird and incredibly distracting. Do not watch this movie.